Rare Historical Photos - And the story behind them... 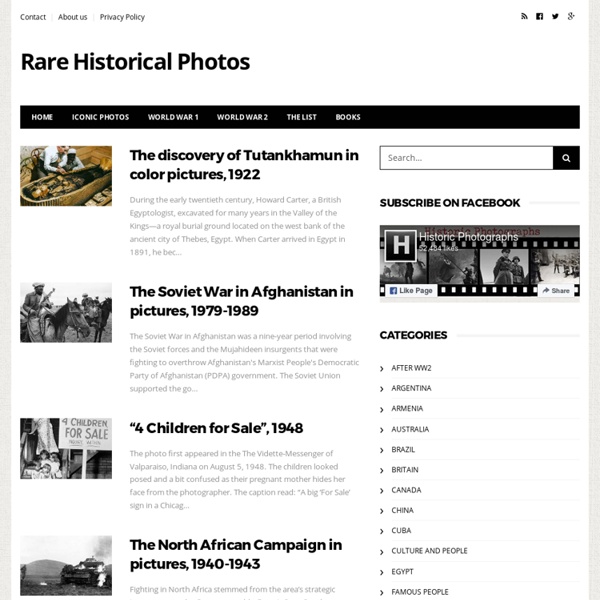 Five ways the digital camera changed us Photography firm Kodak has run into hard times, with critics suggesting it has failed to effectively adapt to digital. But four decades ago Kodak was credited with building the first digital camera, an innovation that has changed the world. The first was a box the size of a small coffee machine with a cassette stuck to the side. Little did anyone know when it took its first image in 1975 that this Heath Robinson-esque prototype would nearly obliterate the market for camera film and turn us all into potential Robert Doisneaus or Henri Cartier-Bressons, recording everything from the banal to the beautiful on our mobile phones. Steven Sasson invented that boxy first digital camera for Kodak. But the company has struggled to fully profit from its invention, and with its share price plunging last year there has been growing disquiet about the company's prospects. Now, according to Samsung, 2.5 billion people around the globe have a digital camera. But how have digital cameras changed us?

33 Abandoned Places That Will Freak You Out… But Yet Make You Want To Go Immediately. – Tech Node There are places on this Earth that are so alien, but only because humans have abandoned them. There is something about this lack of humanity that will make your skin crawl, even if what you’re looking at is as innocent as a ferris wheel. We can build things, but then, we also destroy them. Christ of the Abyss at San Fruttuoso, Italy Kolmanskop in the Namib Desert Abandoned dome houses in Southwest Florida The remains of the SS Ayrfield in Homebush Bay, Australia The abandoned Wonderland Amusement Park outside Beijing, China Fishing hut on a lake in Germany Holland Island in the Chesapeake Bay The Kerry Way walking path between Sneem and Kenmare in Ireland Pripyat, Ukraine 15th century monastery in the Black Forest in Germany Kalavantin Durg near Panvel, India The remains of the Pegasus in McMurdo Sound, Antarctica Angkor Wat in Cambodia The Maunsell Sea Forts in England Bodiam Castle in East Sussex, England Częstochowa, Poland’s abandoned train depot Sunken yacht in Antarctica Craco, Italy

Home | The Sublime League of the Holy Lens History of Cameras: Illustrated Timeline Email Photographic cameras’ roots go deep. Everything started with the camera obscura, and continued with Daguerreotypes, 35mm cameras, digital cameras and camera phones. Photo by Andrew Illarionov Now we offer you to learn more about the photo cameras ‘way’ through ages and generations of photographers. Due to the popularity of this post, it was updated by Chris Ford. The first pinhole camera (also called the Camera Obscura) was invented by Alhazen (Ibn Al-Haytham). The Daguerreotype Camera was announced by the French Academy of Sciences. The first American patent issued in photography to Alexander Wolcott for his camera. The panoramic camera patented by Thomas Sutton. Oliver Wendell Holmes invents stereoscope viewer. George Eastman patents Kodak roll-film camera. First mass-marketed camera – the Brownie was presented by Eastman. The Raisecamera (travel camera) was invented. The first 35mm still camera (also called candid camera ) developed by Oskar Barnack of German Leica Camera. Update

YuFu Ultrafine Stylus - Pressure Sensitive | HEX3 Introducing the YuFu Stylus. The YuFu is the worlds first ultra fine pressure sensitive stylus and the worlds first stylus to include the sensors required for proper palm rejection and pen angle. Digital art requires control over the flow of your "ink" and as with all art, quality tools. The YuFu is not just for artists though, we are building a range of quality tools ideally suited to all digital writing and drawing tasks. The YuFu has an elegant slim design similar to the mechanical pencils you might have grown up using. It has a comfortable knurled grip for effortless use, and eye catching, attractive metal finish. The YuFu is available in 3 different models. The Yufu Pro for serious artists and perfectionists. The YuFu Pro Pressure Sensitive Ultrafine Stylus Features: 4048 levels pressure sensitivity that can be calibrated and adjusted to different curves. YuFu is available in 3 versions, all have a cap and interchangeable tips Only the YuFu Pro and Focus need App Support.

History of Photography and the Camera Updated October 05, 2015. continue reading below our video Niepce placed an engraving onto a metal plate coated in bitumen, and then exposed it to light. The shadowy areas of the engraving blocked light, but the whiter areas permitted light to react with the chemicals on the plate. When Niepce placed the metal plate in a solvent, gradually an image, until then invisible, appeared. In 1839 after several years of experimentation and Niepce's death, Daguerre developed a more convenient and effective method of photography, naming it after himself - the daguerreotype. Daguerre's process 'fixed' the images onto a sheet of silver-plated copper. In 1839, Daguerre and Niepce's son sold the rights for the daguerreotype to the French government and published a booklet describing the process. Talbot sensitized paper to light with a silver salt solution. Photography advanced considerably when sensitized materials could be coated on plate glass.

Old Indian Photos Eyeconart: History of Photography A Brief History of Photography We owe the name "Photography" to Sir John Herschel, who first used the term in 1839, the year the photographic process became public. The word is derived from the Greek words for light and writing. The innovations which would lead to the development of photography existed long before the first photograph. The camera obscura (Latin,literally translating to "dark room") had been in existence for at least four hundred years, but its use was limited to its purpose as an aid to drawing. It was discovered that if a room was completely darkened, with a single hole in one wall, an inverted image would be seen on the opposite wall. It was a French man, Nicephore Niepce (pronounced Nee-ps) who produced the first photograph in June/July 1827. Early Daguerrotypes Couple Holding a Daguerrotype is one of my favorite historical photographs because of its unique commentary on the value of photographs as a record of the real world. Pioneers of Motion Photography

Photography and Society in the 20th Century - Introduction, Background, Amateur Photography, The Kodak, The new miniature cameras, Polaroid, Photography without film, Advertising Photography - JRank Articles GRETCHEN GARNER Independent photographic author and scholar Introduction It would be hard to imagine a technology that had more impact on 20th century life than photography: the automobile, the airplane, nuclear power, all of these were higher profile than photography, yet in day-to-day terms, photography was truly the most pervasive. Here the effect that photography has had on 20th century society will be discussed in four distinct areas: amateur photography (making everyone a photographer), advertising photography (creating desire in the public), journalistic/editorial photography (informing and entertaining the public), and documentary photography (recording the lives of real groups of people). Background The technology of photography is part chemical, part optical, and dates from 1839. During the 19th century, however, cameras were mainly in the hands of professionals or self-educated entrepreneurs who tried photography as a trade. Amateur Photography The Kodak The new miniature cameras

Burning Ghat, Benares (Varanasi) - 1865 | Old Indian Photos Photograph of Hindu temples at the Manikarnika Ghat on the River Ganges at Varanasi (Benares) in Uttar Pradesh, India, from the Macnabb Collection: Album of views of India and Burma, taken by Samuel Bourne in the 1860s. Varanasi is one of the seven sacred cities of Hinduism, situated on the Ganges River at a place where it bends to the north, considered to be an auspicious direction. Much of the religious life of the city revolves around the ghats. Hindus believe that bathing here purifies them of sin. It is known as a tirtha or ‘crossing place’ where devotees can gain access to the divine and where gods and goddesses can come down to earth. It has been a centre of pilgrimage among Buddhists, Hindus and Jains for more than 2500 years.