How to find the right DSLR camera. For professional photographers and advanced hobbyists, digital single lens reflex (DSLR) cameras are the way to go. 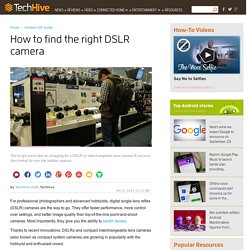 They offer faster performance, more control over settings, and better image quality than top-of-the-line point-and-shoot cameras. Most importantly, they give you the ability to switch lenses. Thanks to recent innovations, DSLRs and compact interchangeable lens cameras (also known as compact system cameras) are growing in popularity with the hobbyist and enthusiast crowd. Many DSLRs now feature preset shooting modes, friendly interfaces, helpful guides, and more compact designs. Mirrorless interchangeable lens cameras are proliferating and growing more popular than ever with their lightweight, sleek, stylish looks and advanced functionality. While you can find consumer DSLR and interchangeable lens cameras for well under $1,000, they are a considerable investment.

Dave Johnson Understand the basics Here are a few key points to consider before shopping. How to Buy a Digital SLR Camera. OB Roundup If you're feeling limited by what your point-and-shoot camera can do, there are plenty of reasons to consider a D-SLR. 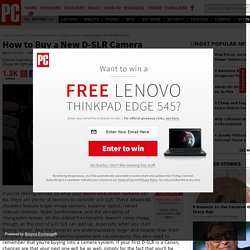 These advanced shooters feature larger image sensors, superior optics, robust manual controls, faster performance, and the versatility of changeable lenses. All this added functionality doesn't come cheap, though, as the cost of a D-SLR can add up, especially when you start buying lenses. And the cameras are understandably larger and heavier than their compact and mirrorless interchangeable lens counterparts. You also need to remember that you're buying into a camera system. Understanding Sensor Size Most consumer D-SLRs use image sensors that, while much larger than those found in point-and-shoot cameras, are somewhat smaller than a 35mm film frame.

There are many inherent advantages to a larger sensor. Another reason to go for the big sensor is to minimize image noise. The second type of optical viewfinder is the pentaprism. How to Choose a DSLR Camera. DSLR Cameras are increasingly becoming a type of camera that is in the reach of the average photographer as prices fall and as manufacturers develop more user friendly models. 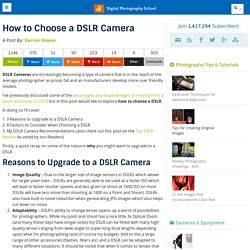 I’ve previously discussed some of the advantages and disadvantages of moving from a point and shoot to DSLR but in this post would like to explore how to choose a DSLR. In doing so I’ll cover: 1. 9 Reasons to Upgrade to a DSLR Camera 2. 8 Factors to Consider when Choosing a DSLR 3. My DSLR Camera Recommendations (also check out this post on the Top DSLR Models As voted by our Readers) Firstly, a quick recap on some of the reasons why you might want to upgrade to a DSLR.

Reasons to Upgrade to a DSLR Camera Image Quality – Due to the larger size of image sensors in DSLRs which allows for larger pixel sizes – DSLRs are generally able to be used at a faster ISO which will lead to faster shutter speeds and less grain (ie shoot at 1600 ISO on most DSLRs will have less noise than shooting at 1600 on a Point and Shoot). 1. 2.

What Specs Actually Matter in a Digital Camera? Nikon D5500 review. Ever since I reviewed it in 2013, I've been recommending the Nikon D5300 as my top choice for a general-purpose dSLR suitable for kids-family-and-travel photography. 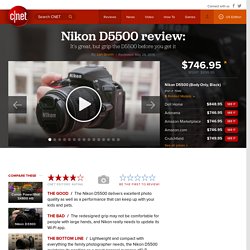 The D5500 is a modest update over the D5300, with some design tweaks and a touchscreen display; however, its features aren't as outstanding as they were when the D5300 debuted a couple years ago, and I have mixed feelings about the design changes. One significant difference between my evaluation units of the D5300 and D5500 is the lens; the D5300 had a much better, albeit a lot bigger and more expensive, 18-140mm f3.5-5.6 lens.

For the D5500, Nikon created its primary kit with the 18-55mm f3.5-5.6 II lens -- $850, £720, AU$1,000 -- a lighter, smaller, collapsible model that makes the system feel a lot lighter, but that also feels like a real step down. Image quality Given that almost nothing's changed in the camera's imaging pipeline from the D5300, it's unsurprising that the image quality looks about the same. Performance.