Understanding Depth of Field in Photography 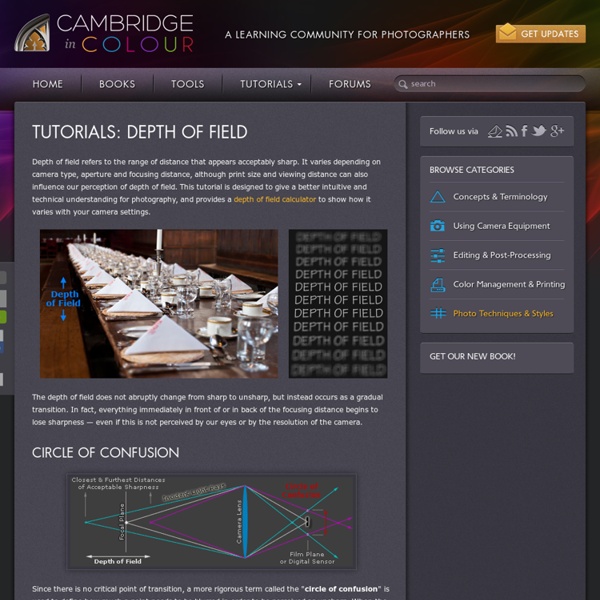 Depth of field refers to the range of distance that appears acceptably sharp. It varies depending on camera type, aperture and focusing distance, although print size and viewing distance can also influence our perception of depth of field. This tutorial is designed to give a better intuitive and technical understanding for photography, and provides a depth of field calculator to show how it varies with your camera settings. The depth of field does not abruptly change from sharp to unsharp, but instead occurs as a gradual transition. In fact, everything immediately in front of or in back of the focusing distance begins to lose sharpness — even if this is not perceived by our eyes or by the resolution of the camera. Since there is no critical point of transition, a more rigorous term called the "circle of confusion" is used to define how much a point needs to be blurred in order to be perceived as unsharp. When does the circle of confusion become perceptible to our eyes?

Reducing Camera Shake with Hand-Held Photos We've all likely encountered this problem many times: blurry photos due to camera shake with hand-held shots. It's especially prevalent for those of us who are unfortunate enough to have unsteady hands. While it cannot be eliminated entirely, fortunately there's a number of steps you can take to greatly reduce its impact — and hopefully prevent it from becoming visible in the first place. Blurry Photo from Camera Shake

The 5 Elements That Can Help You Make a Great Photos Often a great photo relies on a combination of factors coming together to produce the final result. On a few rare occasions, all of these elements present themselves in perfect harmony by chance. However, the majority of the time as a photographer, you have to research, plan, and put a lot of effort into capturing a photograph that has these elements in it. #1 – The Subject Arguably the most important element of the photo is the subject itself (i.e. what you are photographing).

18 Composition Rules For Photos That Shine Rules. When you were a kid, you hated them. You probably still hate at least some of them. For all the good that rules do in our world, they have the ugly side-effect of stifling freedom and individual creativity. Using Wide Angle Lenses A wide angle lens can be a powerful tool for exaggerating depth and relative size in a photo. However, it's also one of the most difficult types of lenses to learn how to use. This page dispels some common misconceptions, and discusses techniques for taking full advantage of the unique characteristics of a wide angle lens.

Camera Exposure: Aperture, ISO & Shutter Speed A photograph's exposure determines how light or dark an image will appear when it's been captured by your camera. Believe it or not, this is determined by just three camera settings: aperture, ISO and shutter speed (the "exposure triangle"). Mastering their use is an essential part of developing an intuition for photography. Achieving the correct exposure is a lot like collecting rain in a bucket. While the rate of rainfall is uncontrollable, three factors remain under your control: the bucket's width, the duration you leave it in the rain, and the quantity of rain you want to collect.

The Luminous Landscape Celebrating Our 15th Year Kilt Rock - Mealt Falls, November 2014 - Isle Of Skye, Scotland Fuji X-T1, 55-200mm at 74mm, f/8, 7.4 sec ISO 800, Lee Big Stopper An Exercise For You to Practice Depth of Field Without Going Outside Many photographers, especially when starting out, have a difficult time understanding depth of field. I also hear quite often that photographers are waiting for nice weather to get out and shoot. So, here’s a fun exercise you can do at home, in any weather, that will help you understand the finer aspects of depth of field. Depth of field is determined by which aperture you choose, what focal length you’re using, and the distance between the camera and the subject. In this example, we’ll explore depth of field using a 100mm lens.

Understanding Digital Camera Histograms: Tones and Contrast Understanding image histograms is probably the single most important concept to become familiar with when working with pictures from a digital camera. A histogram can tell you whether or not your image has been properly exposed, whether the lighting is harsh or flat, and what adjustments will work best. It will not only improve your skills on the computer, but as a photographer as well. Each pixel in an image has a color which has been produced by some combination of the primary colors red, green, and blue (RGB). Each of these colors can have a brightness value ranging from 0 to 255 for a digital image with a bit depth of 8-bits.

Using Telephoto Lenses You've probably heard that telephoto lenses are for enlarging distant subjects, but they're also a powerful artistic tool for affecting the look of your subject. They can normalize the size and distance difference between near and far objects, and can make the depth of field appear more shallow. Telephoto lenses are therefore useful not only for wildlife photography, but also for landscape photography. Read on to learn techniques for utilizing the unique characteristics of a telephoto lens . . . Compact vs. Digital SLR Cameras Choosing between a compact (or "point and shoot") and a digital SLR camera is often the first big purchasing decision when starting out with photography. Not only is it potentially a big financial decision, but it may also determine what kinds of shots you'll be capable of capturing. This tutorial cuts through all the marketing hype in order to highlight only the most important differences between each camera type — thereby helping you to decide which one is best for you and your shooting style. What exactly does it mean for a camera to be a compact (or point and shoot) versus an SLR? Strictly speaking, SLR cameras just have viewfinders that see the same light as the camera's sensor (more on this later), but in practice this isn't the only distinction. While the line between each continues to blur, these three differences usually* still apply:

Harold Davis Webcasts and Video Sunflowers #5, photo by Harold Davis. View this image larger. You may be interested in some of my webcasts and video appearances that you can find online.