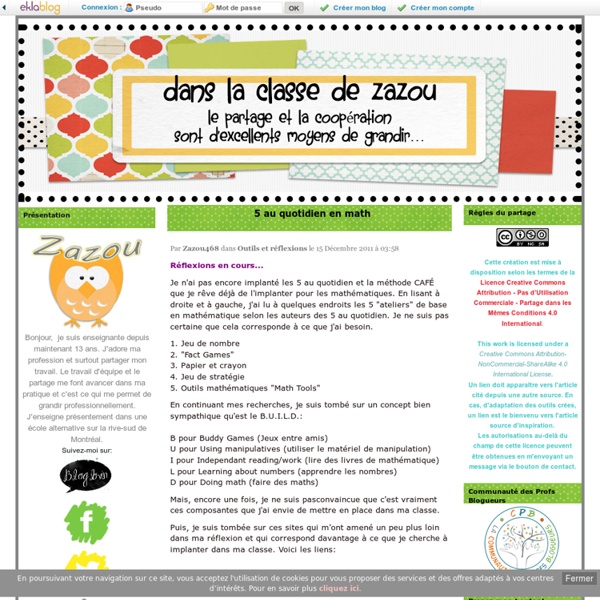 Math Daily 3, How We Started When the second edition of The Daily 5 came out earlier this year I was thrilled to see the authors included a chapter about math. The ideas in the first edition of The Daily 5 really changed my classroom for the better by helping me create independence with my young learners, which allowed me to more easily work with small groups and individuals. A few years ago I tried to implement the Math Daily 5 that was outlined on the authors' website (thedailycafe.com). At that point there were five components to their math block. I found that I did not have enough time to get to all five activities each day. So, that year I toned it down a little and did my version, which by coincidence was three parts (math by myself, math with a partner, and math with the teacher).

Apps for Making Ten - Math Coach's Corner I walked into a 2nd grade classroom Thursday to find the students busily engaged in math workshop. Several students were working with iPads and playing what looked to be an addictive math game. I sat myself down and asked them to show it to me. The app, Numbers Logic Puzzle, is a Candy Crush-like game for making ten. Players swipe neighboring number tiles that add to 10, causing the tiles to disappear and new tiles to fall into place. When I got home, I downloaded it on my iPad and gave it a go myself.

Debbie Diller I wish I knew the best way to explain my Math Stations. I've said it many times, I like it simple, clear and meaningful. So ... in a nutshell... here is how I run my math stations in my 2nd grade class. Each month I cover 12 CC standards. How To Launch Guided Math by Reagan Tunstall Featured Main Categories Cart is empty Total: View Wish ListView Cart Log InJoin Us Modeling Addition and Subtraction Structures - Math Coach's Corner I am finishing out the school year with my first and second graders by trying to give them a solid foundation with the different structures for addition and subtraction problems. I’ve been using a marvelous free resource called Thinking Blocks. They offer a variety of free iPad apps, but I’ve been using the web version on my interactive white board because I wanted to bring in some concrete learning. The Thinking Blocks program allows you to choose the type of problem to work with, and we began with part/whole problems with two parts. I made part/whole mats for the kiddos to use (on the back side is a part/whole mat with three parts), because I wanted them to be able to act out the models.

That's So Second Grade!: Daily 5 Math & a FREEBIE! After jumping head first into Daily 5 for my literacy time at the start of school, I decided I would take the plunge with math as well. Using Daily 5 for my reading and writing time has had it's kinks, but has been the very best thing I could have done to create a classroom culture grounded in literacy and reading. Until I starting using the Daily 5 structure for my math time about two weeks, my math block went a little like this...I would teach a WHOLE GROUP LESSON or activity for about 20-25 minutes. Then students would all complete the same worksheet or activity at the same time and when they were finished they would go to either me or my assistant and have their work checked. If they needed to correct any, they would go do so.

Equivalent Fractions Game of 'Spoons' – Games 4 Gains This game for practicing equivalent fractions is a variation on the classic card game "Spoons." If you've ever played "Spoons" before, you know that the game is super fast-paced and lots of fun. I figured that if I could combine the fun and exciting parts of "Spoons" with some equivalent fractions practice, I'd have a center game that my students would be dying to play. And let me tell you, this one does not disappoint! "Car"d Game If I had to choose only 1 type of toy for my son to play, it would, without question, be matchbox cars. He spends hours each day playing with them - and much of that play includes "lining them up". I decided it would be fun to create a game based on his current passion, and of course - share it with you.