22 Maps That Show The Deepest Linguistic Conflicts In America 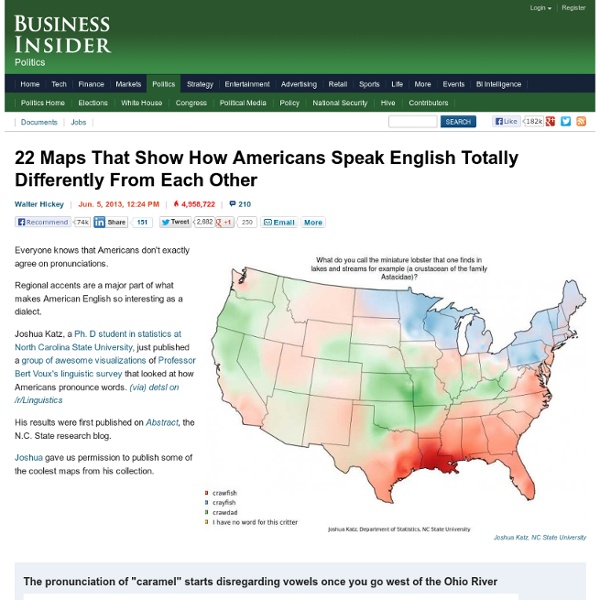 UPDATE: Enthusiastic Marylanders have alerted us that there is indeed a town named "Bowie, Md." that is pronounced "Boo-wie." That solves that. No word yet from Texans. UPDATE 2: From a Texan: "It's pronounced Boo-wie because it's named after Jim Bowie (pronounced Boo-wie), who played a major role in the Texas revolution. That explains why we're the only ones who pronounce it correctly."

Related:  Maps of the USA

The Best Map Ever Made of America's Racial Segregation Last year, a pair of researchers from Duke University published a report with a bold title: “The End of the Segregated Century.” U.S. cities, the authors concluded, were less segregated in 2012 than they had been at any point since 1910. But less segregated does not necessarily mean integrated–something this incredible map makes clear in vivd color.

International Phonetic Alphabet © Tomasz P. Szynalski, Antimoon.com This chart contains all the sounds (phonemes) used in the English language. For each sound, it gives: Most Popular Road Names in America In 1993, the U.S. Census released tally of the 76 most common street names in America. For well over 20 years, this was pretty much the only list that anyone had. The Most Common Job In Every State *We used data from the Census Bureau, which has two catch-all categories: "managers not elsewhere classified" and "salespersons not elsewhere classified." Because those categories are broad and vague to the point of meaninglessness, we excluded them from our map. What's with all the truck drivers? Truck drivers dominate the map for a few reasons. Driving a truck has been immune to two of the biggest trends affecting U.S. jobs: globalization and automation.

English grammar: A complete guide Do you have a question about the correct usage of the semi-colon or how to place relative adverbs in a sentence? If so, you've come to the right place! The edufind.com English grammar guide is a complete reference on the rules of English usage. Every grammatical rule is explained in clear, simple language with several examples and, when necessary, counter-examples.

Creative Writing Prompts Write a scene that includes a character speaking a different language, speaking in a thick accent, or otherwise speaking in a way that is unintelligibe to the other characters. (Note: You don't necessarily need to know the language the character is speaking—be creative with it!) Describe a character's reaction to something without explaining what it is. See if your fellow prompt responders can guess what it is.

Your Favorites: 100 Best-Ever Teen Novels It's almost a cliche at this point to say that teen fiction isn't just for teens anymore. Just last year, the Association of American Publishers ranked Children's/Young Adult books as the single fastest-growing publishing category. Which is why we were only a little surprised to see the tremendous response that came in for this summer's Best-Ever Teen Fiction poll. A whopping 75,220 of you voted for your favorite young adult novels, blasting past the total for last year's science fiction and fantasy poll at, dare we say it, warp speed. And now, the final results are in.

Getting the whole class talking Getting the whole class talking Submitted by admin on 16 August, 2011 - 14:39 The following activities are designed to get everyone talking. 45 ways to avoid using the word 'very' Writers Write is your one-stop resource for writers. Use these 45 ways to avoid using the word ‘very’ to improve your writing. Good writers avoid peppering their writing with qualifiers like ‘very’ and ‘really’. They are known as padding or filler words and generally add little to your writing. Fifteen Writing Exercises Writing exercises are a great way to increase your writing skills and generate new ideas. They give you perspective and help you break free from old patterns and crutches. To grow as a writer, you need to sometimes write without the expectation of publication or worry about who will read your work.

Story Starters for Creative Writing Exercises One-line story starters are great for group writing exercises. They have enough conflict to start the writing flow, but are open-ended to allow each writer to follow his or her own direction. Individual writers can use them on a regular basis for “practice writing,” following Natalie Goldberg’s suggestions in Writing Down the Bones. Creative Writing Exercises Set a timer for 10, 15 or 20 minutes. Write the opening sentence and then follow it wherever the imagination goes.