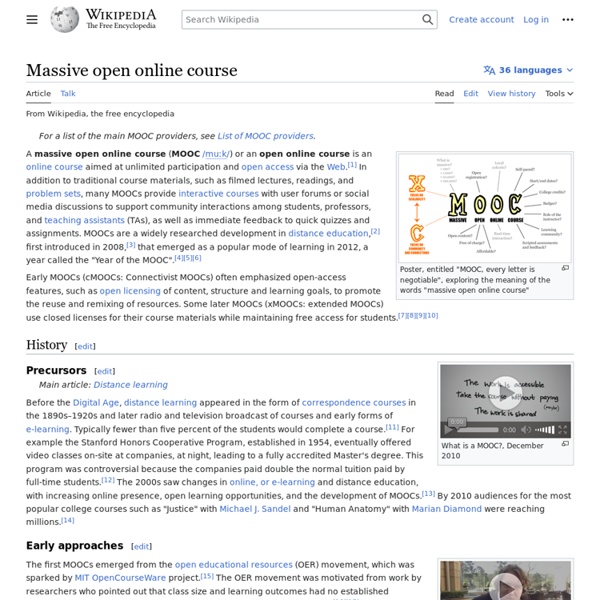 Poster, entitled "MOOC, every letter is negotiable", exploring the meaning of the words "Massive Open Online Course" A massive open online course (MOOC /muːk/) is an online course aimed at unlimited participation and open access via the web.[1] In addition to traditional course materials such as filmed lectures, readings, and problem sets, many MOOCs provide interactive user forums to support community interactions among students, professors, and teaching assistants (TAs). MOOCs are a recent and widely researched development in distance education which were first introduced in 2006 and emerged as a popular mode of learning in 2012.[2][3] Early MOOCs often emphasized open-access features, such as open licensing of content, structure and learning goals, to promote the reuse and remixing of resources. Some later MOOCs use closed licenses for their course materials while maintaining free access for students.[4][5][6][7] History[edit] What is a MOOC? Precursors[edit] Early approaches[edit]

Should 'real' students do an online course on the side? Universities have started giving away their content free as "massive open online courses", with the satisfyingly ridiculous acronym mooc (I challenge you to say it three times with a straight face). Eleven top UK universities recently announced they were joining the Open University to launch FutureLearn, in a bid to catch up with the elite US institutions that have led the way in teaching huge numbers online. It all sounds great for people who, for one reason or another, can't go to a traditional university. But do moocs have anything to offer students already studying at a bricks-and-mortar institution? People like me, who hate the niggling feeling that they might be missing out on a bargain?

Bodhicitta Etymology[edit] Etymologically, the word is a combination of the Sanskrit words bodhi and citta. Bodhi means "awakening" or "enlightenment". MOOCs: Top 10 Sites for Free Education With Elite Universities MOOC stands for Massive Open Online Courses. Although there has been access to free online courses on the Internet for years, the quality and quantity of courses has changed. Access to free courses has allowed students to obtain a level of education that many only could dream of in the past. This has changed the face of education. In The New York Times article Instruction for Masses Knocked Down Campus Walls, author Tamar Lewin stated, “in the past few months hundreds of thousands of motivated students around the world who lack access to elite universities have been embracing them as a path toward sophisticated skills and high-paying jobs, without paying tuition or collecting a college degree.”

Future of Education: Breaking The Connection Between Learning and Assessment - Epic 2020 It is the best of times. It is the worst of times. Let's find out. Sal Khan The road to 2020 began in 2009. Khan Academy The website features thousands of educational resources, including a personalized learning dashboard, over 100,000 exercise problems, and over 5,000 micro lectures[5] via video tutorials stored on YouTube teaching mathematics, history, healthcare, medicine, finance, physics, general chemistry, biology, astronomy, economics, cosmology, organic chemistry, American civics, art history, macroeconomics, microeconomics, and computer science.[6] All resources are available for free to anyone around the world. Khan Academy reaches about 10,000,000 students per month and has delivered over 300,000,000 lessons.[7][8] History[edit]

Founder of Lynda.com Talks About Future of Learning Online (Video) - Kara Swisher - Media To Lynda Weinman, it’s funny that the online learning site she and her husband founded in 1995 suddenly seems like an overnight success. “Yes, only two decades in the making,” she joked at a lunch I had with her last week. But there certainly has been a big buzz around Lynda.com — named after Weinman — after the Carpinteria, Calif., company raised $103 million a month ago in its first major funding. And, last week, as part of a major expansion globally using that money, it bought Austria-based video2brain to add to its online course offerings in a range of computer and other skills, in a number of European languages. It’s all part of the plan to dominate the continuing education market, and to bring 60 more employees and a pile of lessons to a service that competes with a range of others, such as Codecademy and Treehouse in the business and computer learning space.

Serpent (symbolism) The serpent, or snake, is one of the oldest and most widespread mythological symbols. The word is derived from Latin serpens, a crawling animal or snake. Snakes have been associated with some of the oldest rituals known to humankind[1] and represent dual expression[2] of good and evil.[3] In some cultures snakes were fertility symbols, for example the Hopi people of North America performed an annual snake dance to celebrate the union of Snake Youth (a Sky spirit) and Snake Girl (an Underworld spirit) and to renew fertility of Nature. During the dance, live snakes were handled and at the end of the dance the snakes were released into the fields to guarantee good crops. "The snake dance is a prayer to the spirits of the clouds, the thunder and the lightning, that the rain may fall on the growing crops

50 Places You Can Learn to Code (for Free) Online If you’re curious about learning a programming language then you’re in luck: there’s no shortage of resources for learning how to code online. University-level courses, tutorials, cheat sheets, and coding communities all offer excellent ways to pick up a new language, and maybe even a new job, too. Read on, and you’ll discover 50 great places to learn how to code, for free, online. University Many big names in education including MIT and Stanford offer programming courses, absolutely free. A Few Free Lesson Planning and Classroom Resources for Teachers Today, there are many online resources for teachers to make lesson planning quicker, easier, and more productive. Unlike ten or twenty years ago, teachers no longer need to spend countless hours creating lesson plans ‘from scratch’ and finding related resources. Now there are plenty of online tools to help busy teachers make lesson plans and find great worksheets without wasting too much time.