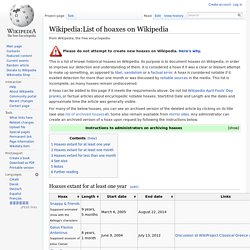 Its purpose is to document hoaxes on Wikipedia, in order to improve our detection and understanding of them. It is considered a hoax if it was a clear or blatant attempt to make up something, as opposed to libel, vandalism or a factual error. A hoax is considered notable if it evaded detection for more than one month or was discussed by reliable sources in the media. This list is incomplete, as many hoaxes remain undiscovered. A hoax can be added to this page if it meets the requirements above. For many of the below hoaxes, you can see an archived version of the deleted article by clicking on its title (see also list of archived hoaxes). Hoaxes extant for at least one year[edit] Hoaxes extant for at least one month[edit] Nine Reasons Women Don’t Edit Wikipedia (in their own words) « Sue Gardner's Blog. The New York Times piece on Wikipedia’s gender gap has given rise to dozens of great online conversations about why so few women edit Wikipedia. 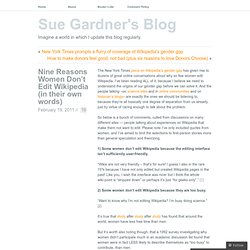 I’ve been reading ALL of it, because I believe we need to understand the origins of our gender gap before we can solve it. And the people talking –on science sites and in online communities and on historian’s blogs– are exactly the ones we should be listening to, because they’re all basically one degree of separation from us already, just by virtue of caring enough to talk about the problem. So below is a bunch of comments, culled from discussions on many different sites — people talking about experiences on Wikipedia that make them not want to edit. Please note I’ve only included quotes from women, and I’ve aimed to limit the selections to first-person stories more than general speculation and theorizing. 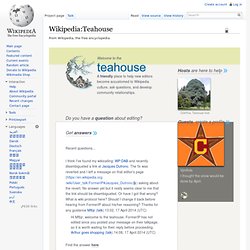 Get answers » Recent questions... I think I've found my wikicalling: WP:DAB and recently disambiguated a link at Jacques Dutronc. Hi Mfbjr, welcome to the teahouse. Find the answer here VjmlhdsI thought the snow would be done by April. Wikipedia Teahouse a warm welcome for new editors. When you click the “edit” button for the first time on Wikipedia, you might be surprised to find a screen full of wiki markup, the language used to format text, images, and references in Wikipedia articles. 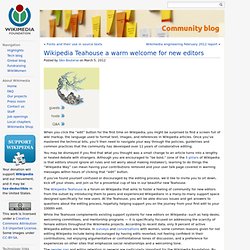 Once you’ve mastered the technical bits, you’ll then need to navigate your way through the policies, guidelines and common practices that the community has developed over 11 years of collaborative editing. 6 Important Wikipedia Tools for Teachers. Wkipedia is a great educational resource for both teachers and students. 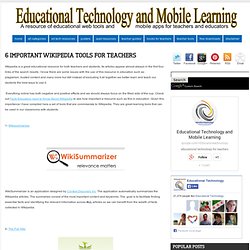 Its articles appear almost always in the first four links of the search results. I know there are some issues with the use of this resource in education such as : plagiarism, trusted content and many more but still instead of excluding it all together we better learn and teach our students the best ways to use it. Everything online has both negative and positive effects and we should always focus on the filled side of the cup. Online Communities Activity Spring/S... Wikipedia gets overdue makeover to give recognition to science's female pioneers - Science - News. All that is set to change, though, as the Royal Society hosts a mass "edit-a-thon" to improve the Wikipedia profiles of leading female scientists who have been ignored and overlooked by the online encyclopedia's male-dominated army of contributors.

The scientific body, founded in 1660, has drawn up a list of prominent women who it believes deserve greater prominence on the site. Online Communities Map Spring 2007 (Courtesy of XKCD: ) National Library of Scotland recruits 'Wikipedian' 23 April 2013Last updated at 20:46 ET The library's digital access manager said many librarians had been "bemused" by Wikipedia until now The National Library of Scotland has announced plans to recruit a full-time "Wikipedian". 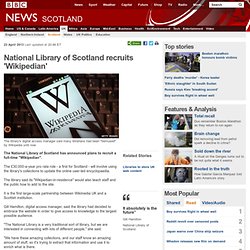 The £30,000-a-year pro rata role - a first for Scotland - will involve using the library's collections to update the online user-led encyclopaedia. The library said its "Wikipedian-in-residence" would also teach staff and the public how to add to the site. It is the first large-scale partnership between Wikimedia UK and a Scottish institution. Gill Hamilton, digital access manager, said the library had decided to embrace the website in order to give access to knowledge to the largest possible audience. "The National Library is a very traditional sort of library, but we are interested in connecting with lots of different people," she said. "For example, we have the last letter of Mary Queen of Scots. Continue reading the main story World class collections.

A librarian uses her expertise to improve Wikipedia. Chanitra Bishop. 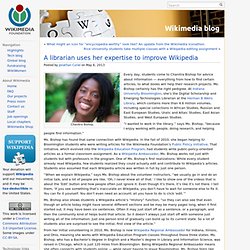 Every day, students come to Chanitra Bishop for advice about information — everything from how to find certain articles, to what books will help their research projects. Ms. Bishop certainly has the right pedigree. At Indiana University Bloomington, she’s the Digital Scholarship and Emerging Technologies Librarian at the Herman B Wells Library, which contains more than 4.6 million volumes, including special collections in African Studies, Russian and East European Studies, Uralic and Altaic Studies, East Asian Studies, and West European Studies. “I wanted to work in the library,” says Ms. Ms. “When we explain Wikipedia,” says Ms. Ms. From her initial volunteering in 2010, Ms. Wikipedia Loves Libraries. Shut not your doors to me proud libraries, For that which was lacking on all your well-fill'd shelves, yet needed most, I bring, Wikipedia Loves Libraries is a general initiative for improved Wikimedia engagement with libraries (and archives), and more concretely an annual campaign of wiki-workshops and edit-a-thons at libraries around Open Access Week in October/November. 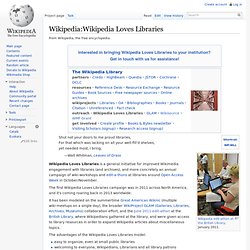 The first Wikipedia Loves Libraries campaign was in 2011 across North America, and it's coming roaring back in 2013 worldwide. It has been modeled on the summertime Great American Wiknic (multiple wiki-meetups on a single day), the broader WikiProject GLAM (Galleries, Libraries, Archives, Museums) collaboration effort, and the June 2011 edit-athon at the British Library, where Wikipedians gathered at the library, and were given access to library resources in order to expand Wikipedia articles about miscellaneous topics.

Be a Wikipedia Editor. From Wired How-To Wiki Let's get one thing out there first: Anybody can edit Wikipedia, the free online encyclopedia. 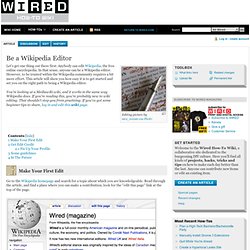 In that sense, anyone can be a Wikipedia editor. However, to be trusted within the Wikipedia community requires a bit more effort. Semblance and Event. Wikipedia essays. No one cares about your garage band.