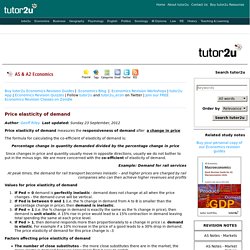 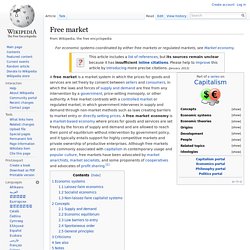 A free market is a market system in which the prices for goods and services are set freely by consent between sellers and consumers, in which the laws and forces of supply and demand are free from any intervention by a government, price-setting monopoly, or other authority. A free market contrasts with a controlled market or regulated market, in which government intervenes in supply and demand through non-market methods such as laws creating barriers to market entry or directly setting prices.

Factors of production. Historical schools and factors[edit] In the interpretation of the currently dominant view of classical economic theory developed by neoclassical economists, the term "factors" did not exist until after the classical period and is not to be found in any of the literature of that time.[5] Differences are most stark when it comes to deciding which factor is the most important. 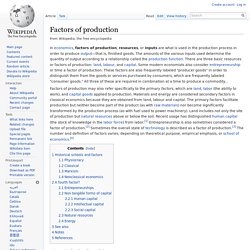 Gross domestic product. Gross domestic product (GDP) is defined by the Organisation for Economic Co-operation and Development (OECD) as "an aggregate measure of production equal to the sum of the gross values added of all resident, institutional units engaged in production (plus any taxes, and minus any subsidies, on products not included in the value of their outputs). 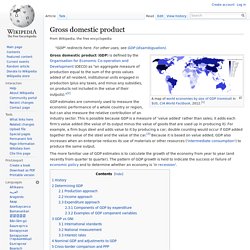 "[2] GDP estimates are commonly used to measure the economic performance of a whole country or region, but can also measure the relative contribution of an industry sector. This is possible because GDP is a measure of 'value added' rather than sales; it adds each firm's value added (the value of its output minus the value of goods that are used up in producing it). The more familiar use of GDP estimates is to calculate the growth of the economy from year to year (and recently from quarter to quarter). Mixed economy. In general the mixed economy is characterised by the private ownership of the means of production, the dominance of markets for economic coordination, with profit-seeking enterprise and the accumulation of capital remaining the fundamental driving force behind economic activity. 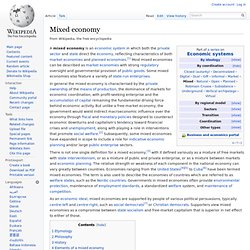 But unlike a free-market economy, the government would wield indirect macroeconomic influence over the economy through fiscal and monetary policies designed to counteract economic downturns and capitalism's tendency toward financial crises and unemployment, along with playing a role in interventions that promote social welfare.[2] Subsequently, some mixed economies have expanded in scope to include a role for indicative economic planning and/or large public enterprise sectors. As an economic ideal, mixed economies are supported by people of various political persuasions, typically centre-left and centre-right, such as social democrats[7] or Christian democrats. Etymology[edit] Philosophy[edit] Planned economy. Planned economies are usually categorized as a particular variant of socialism, and have historically been supported by and implemented by Marxist-Leninist socialist states. 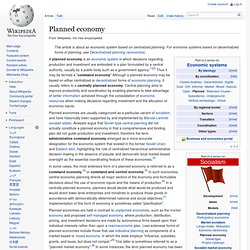 Analysts argue that Soviet-type central planning did not actually constitute a planned economy in that a comprehensive and binding plan did not guide production and investment; therefore the term administrative command economy emerged as a more accurate designation for the economic system that existed in the former Soviet Union and Eastern bloc, highlighting the role of centralized hierarchical administrative decision-making in the absence of popular and democratic local market-based oversight as the essential coordinating feature of these economies.[3] Although most economies today are market-based mixed economies (which are partially planned), fully planned economies of the Soviet-type continue to exist (as of 2013) in Cuba, North Korea and Laos.[10][needs update] Economic planning versus command economies[edit] Market economy. Market economies can range from hypothetical laissez-faire and free market variants to regulated markets and interventionist variants. 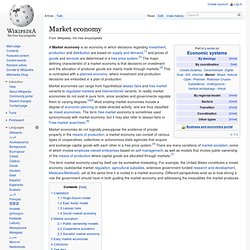 In reality market economies do not exist in pure form, since societies and governments regulate them to varying degrees.[4][5] Most existing market economies include a degree of economic planning or state-directed activity, and are thus classified as mixed economies. The term free-market economy is sometimes used synonymously with market economy, but it may also refer to laissez-faire or Free-market anarchism.[6] Capitalism[edit] Capitalism generally refers to economic system where the means of production are largely or entirely privately owned and operated for a profit, structured on the process of capital accumulation. Economy. In the past, economic activity was theorized to be bounded by natural resources, labor, and capital. 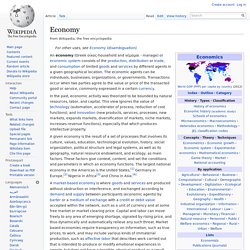 This view ignores the value of technology (automation, accelerator of process, reduction of cost functions), and innovation (new products, services, processes, new markets, expands markets, diversification of markets, niche markets, increases revenue functions), especially that which produces intellectual property. A given economy is the result of a set of processes that involves its culture, values, education, technological evolution, history, social organization, political structure and legal systems, as well as its geography, natural resource endowment, and ecology, as main factors.

These factors give context, content, and set the conditions and parameters in which an economy functions. The largest national economy in the Americas is the United States,[1] Germany in Europe,[2] Nigeria in Africa[3] and China in Asia.[4] Range[edit] Etymology[edit] History[edit] Ancient times[edit] Opportunity cost. History[edit] The term was first used in 1914 by Austrian economist Friedrich von Wieser in his book Theorie der gesellschaftlichen Wirtschaft [4] (Theory of Social Economy). 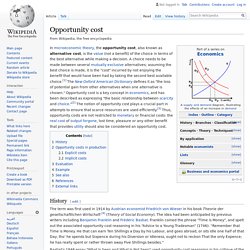 The idea had been anticipated by previous writers including Benjamin Franklin and Frédéric Bastiat. Franklin coined the phrase "Time is Money", and spelt out the associated opportunity cost reasoning in his “Advice to a Young Tradesman” (1746): “Remember that Time is Money. He that can earn Ten Shillings a Day by his Labour, and goes abroad, or sits idle one half of that Day, tho’ he spends but Sixpence during his Diversion or Idleness, ought not to reckon That the only Expence; he has really spent or rather thrown away Five Shillings besides.” Bastiat's 1848 essay "What Is Seen and What Is Not Seen" used opportunity cost reasoning in his critique of the broken window fallacy, and of what he saw as spurious arguments for public expenditure.

Scarcity. Map of the global distribution of economic and physical water scarcity as of 2006 Scarcity is the fundamental economic problem of having seemingly unlimited human wants in a world of limited resources. 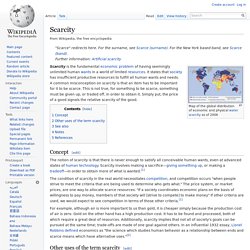 It states that society has insufficient productive resources to fulfill all human wants and needs. A common misconception on scarcity is that an item has to be important for it to be scarce. This is not true, for something to be scarce, something must be given up, or traded off, in order to obtain it. Macroeconomics. Circulation in macroeconomics. Macroeconomics (from the Greek prefix makro- meaning "large" and economics) is a branch of economics dealing with the performance, structure, behavior, and decision-making of an economy as a whole, rather than individual markets.

This includes national, regional, and global economies.[1][2] With microeconomics, macroeconomics is one of the two most general fields in economics. While macroeconomics is a broad field of study, there are two areas of research that are emblematic of the discipline: the attempt to understand the causes and consequences of short-run fluctuations in national income (the business cycle), and the attempt to understand the determinants of long-run economic growth (increases in national income). Macroeconomic models and their forecasts are used by governments to assist in the development and evaluation of economic policy.

Basic macroeconomic concepts[edit] Microeconomics. This is in contrast to macroeconomics, which involves the "sum total of economic activity, dealing with the issues of growth, inflation, and unemployment. "[2] Microeconomics also deals with the effects of national economic policies (such as changing taxation levels) on the aforementioned aspects of the economy.[4] Particularly in the wake of the Lucas critique, much of modern macroeconomic theory has been built upon 'microfoundations'—i.e. based upon basic assumptions about micro-level behavior. Economics. For a topical guide to this subject, see Outline of economics. Economics is the social science that studies the behavior of individuals, households, and organizations (called economic actors, players, or agents), when they manage or use scarce resources, which have alternative uses, to achieve desired ends.

Production–possibility frontier. Indicators[edit] Efficiency[edit] An example PPF with illustrative points marked The PPC shows left to right downward position. A PPF(production possibility frontier) or PPC typically takes the form of the curve on the right. An economy that is operating on the PPF is said to be efficient, meaning that it would be impossible to produce more of one good without decreasing production of the other good.

For example, assuming that the economy's available quantity of factors of production does not change over time and that technological progress does not occur, then if the economy is operating on the PPF production of guns would need to be sacrificed in order to produce more butter.[1] If production is efficient, the economy can choose between combinations (i.e., points) on the PPF: B if guns are of interest, C if more butter is needed, D if an equal mix of butter and guns is required.[1] Opportunity cost[edit]