Attila. No known image of Attila exists from life. 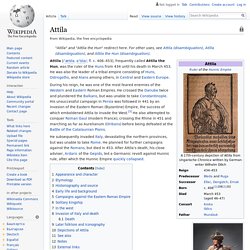 Above is a likeness by artist and historian George S. Stuart created from his physical description mentioned in historical records. Attila (/ˈætɪlə, əˈtɪlə/; fl. c. 406–453), frequently called Attila the Hun, was the ruler of the Huns from 434 until his death in March 453. He was also the leader of a tribal empire consisting of Huns, Ostrogoths, and Alans among others, in Central and Eastern Europe. During his reign, he was one of the most feared enemies of the Western and Eastern Roman Empires. He subsequently invaded Italy, devastating the northern provinces, but was unable to take Rome. Appearance and character Figure of Attila in a museum in Hungary. There is no surviving first-hand account of Attila's appearance, but there is a possible second-hand source provided by Jordanes, who cites a description given by Priscus.[4][5] Etymology A painting of Attila riding a pale horse, by French Romantic artist Eugène Delacroix (1798–1863) M.

Bon. Yungdrung is a left facing swastika, a sacred symbol of Bon religion.[1] Gods and spirits[edit] Bonpos cultivate household gods in addition to other deities: Traditionally in Tibet divine presences or deities would be incorporated into the very construction of the house making it in effect a castle (dzong) against the malevolent forces outside it. 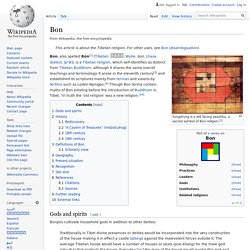 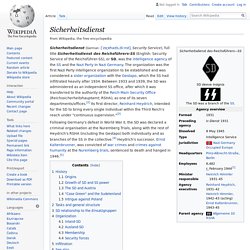 The organization was the first Nazi Party intelligence organization to be established and was considered a sister organization with the Gestapo, which the SS had infiltrated heavily after 1934. Between 1933 and 1939, the SD was administered as an independent SS office, after which it was transferred to the authority of the Reich Main Security Office (Reichssicherheitshauptamt; RSHA), as one of its seven departments/offices. Its first director, Reinhard Heydrich, intended for the SD to bring every single individual within the Third Reich's reach under "continuous supervision. " Maximilien Robespierre. French revolutionary lawyer and politician. 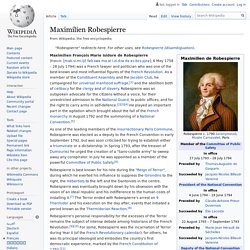 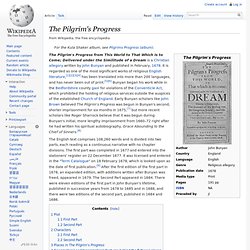 It is regarded as one of the most significant works of religious English literature,[1][2][3][4] has been translated into more than 200 languages, and has never been out of print.[5][6] Bunyan began his work while in the Bedfordshire county gaol for violations of the Conventicle Act, which prohibited the holding of religious services outside the auspices of the established Church of England. Early Bunyan scholars like John Brown believed The Pilgrim's Progress was begun in Bunyan's second, shorter imprisonment for six months in 1675,[7] but more recent scholars like Roger Sharrock believe that it was begun during Bunyan's initial, more lengthy imprisonment from 1660–72 right after he had written his spiritual autobiography, Grace Abounding to the Chief of Sinners.[8]

Waldorf Astoria New York. From its inception, the Waldorf Astoria gained international renown for its lavish dinner parties and galas, often at the center of political and business conferences and fundraising schemes involving the rich and famous. 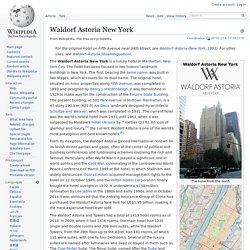 Particularly after World War II it played a significant role in world politics and the Cold War, culminating in the controversial World Peace Conference of March 1949 at the hotel, in which Stalinism was widely denounced. Conrad Hilton acquired management rights to the hotel on 12 October 1949, and the Hilton Hotels Corporation finally bought the hotel outright in 1972. It underwent a $150 million renovation by Lee Jablin in the 1980s and early 1990s, and in October 2014 it was announced that the Anbang Insurance Group of China had purchased the Waldorf Astoria New York for US$1.95 billion, making it the most expensive hotel ever sold. Mercury. From Wikipedia, the free encyclopedia Mercury commonly refers to: Mercury may also refer to: Places[edit] Mercury Bay, a large V-shaped bay on the eastern coast of the Coromandel Peninsula on the North Island of New ZealandMercury Fountain, a fountain in Tom Quad, Christ Church College, Oxford, EnglandMercury Islands, a group of islands off the northeast coast of New Zealand, consisting of one large island and six smaller islandsMercury, Nevada, a closed city in Nye County, Nevada, United States, situated within the Nevada Test SiteMercury, Savoie, a commune close to Albertville in the Savoie département in the Rhône-Alpes region in southeastern France. 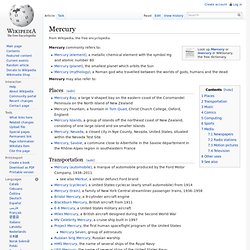 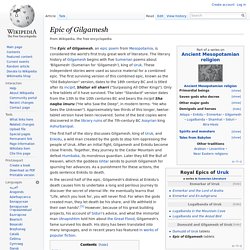 The literary history of Gilgamesh begins with five Sumerian poems about 'Bilgamesh' (Sumerian for 'Gilgamesh'), king of Uruk. These independent stories were used as source material for a combined epic. Salem witch trials. The central figure in this 1876 illustration of the courtroom is usually identified as Mary Walcott. 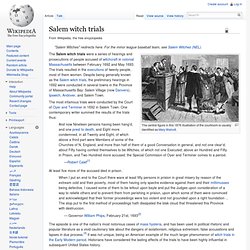 Nefertari. Nefertari, also known as Nefertari Meritmut, was one of the Great Royal Wives (or principal wives) of Ramesses the Great.[1] Nefertari means 'Beautiful Companion' and Meritmut means 'Beloved of [the Goddess] Mut'. 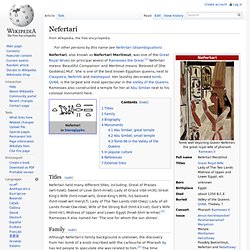 She is one of the best known Egyptian queens, next to Cleopatra, Nefertiti and Hatshepsut. Her lavishly decorated tomb, QV66, is the largest and most spectacular in the Valley of the Queens. Ramesses also constructed a temple for her at Abu Simbel next to his colossal monument here. Titles[edit] Nefertari held many different titles, including: Great of Praises (wrt-hzwt), Sweet of Love (bnrt-mrwt), Lady of Grace (nbt-im3t), Great King’s Wife (hmt-niswt-wrt), Great King’s Wife, his beloved (hmt-niswt-wrt meryt.f), Lady of The Two Lands (nbt-t3wy), Lady of all Lands (hnwt-t3w-nbw), Wife of the Strong Bull (hmt-k3-nxt), God’s Wife (hmt-ntr), Mistress of Upper and Lower Egypt (hnwt-Shm’w-mhw).[2] Ramesses II also named her 'The one for whom the sun shines'. Family[edit] Kohlberg Kravis Roberts.

KKR & Co. L.P. (formerly known as Kohlberg Kravis Roberts & Co.) is an American multinational private equity firm, specializing in leveraged buyouts, headquartered in New York. The firm sponsors and manages private equity investment funds. Since its inception, the firm has completed over $400 billion of private equity transactions and was a pioneer in the leveraged buyout industry.[2][3] The firm was founded in 1976 by Jerome Kohlberg, Jr., and cousins Henry Kravis and George R. Fyodor Dostoyevsky. Sewu. History[edit] Kalasan. History[edit] Also to build a vihara (monastery) for buddhist monks from Sailendra family's realm. Panangkaran awarded the Kalaça village to sangha (buddhist monastic community).[1] According to the date of this inscription, Kalasan temple is the oldest among temples built in the Prambanan Plain. Despite being renovated and partially rebuilt during the Dutch colonial era, the temple currently is in poor condition.

Compared to other temples nearby such as Prambanan, Sewu, and Sambisari the temple is not well maintained. Borobudur. Borobudur, or Barabudur, is a 9th-century Mahayana Buddhist Temple in Magelang, Central Java, Indonesia. The monument consists of six square platforms topped by three circular platforms and is decorated with 2,672 relief panels and 504 Buddha statues.[1] A main dome, located at the center of the top platform, is surrounded by 72 Buddha statues seated inside a perforated stupa. Prambanan. Candi Prambanan or Candi Rara Jonggrang is a 9th-century Hindu temple compound in Central Java, Indonesia, dedicated to the Trimurti, the expression of God as the Creator (Brahma), the Preserver (Vishnu) and the Destroyer (Shiva).

The temple compound is located approximately 17 kilometres (11 mi) northeast of the city of Yogyakarta on the boundary between Central Java and Yogyakarta provinces.[1] The temple compound, a UNESCO World Heritage Site, is the largest Hindu temple site in Indonesia, and one of the biggest in Southeast Asia. It is characterized by its tall and pointed architecture, typical of Hindu temple architecture, and by the towering 47-metre-high (154 ft) central building inside a large complex of individual temples.[2] Prambanan attracts many visitors from across the world.[3] Etymology[edit] History[edit] Construction[edit]

Lebanon. Lebanon ( The earliest evidence of civilization in Lebanon dates back more than seven thousand years, predating recorded history.[8] Lebanon was the home of the Phoenicians, a maritime culture that flourished for over a thousand years (c. 1550–539 BC). Hell's Kitchen, Manhattan. Location map of Hell's Kitchen in Manhattan. Leonard Lake. Leonard Lake (October 29, 1945 – June 6, 1985) was an American serial killer. Charles Ng. After a lengthy dispute between Canada and the United States,[3] Ng was extradited to California and was convicted of 11 murders.[1] He is currently on death row at San Quentin State Prison.

Early life[edit] Ng was born in Hong Kong,[4] the son of a wealthy Chinese executive and his wife. As a child, Ng was harshly disciplined and abused by his father. As a teenager, Ng was described as a troubled loner and was expelled from several schools. Murder of James Bulger. "James Bulger" redirects here. For the organized crime figure, see Whitey Bulger. Richard I of England. Richard I (8 September 1157 – 6 April 1199) was King of England from 6 July 1189 until his death. Union of South Africa. Union of South Africa Red Ensign (1912–1928) Jimi Hendrix. French Wars of Religion. Huguenot. The Huguenots (/ˈhjuːɡənɒt/ or /huːɡəˈnoʊ/; French: [yɡno], [yɡəno]) were members of the Protestant Reformed Church of France during the 16th and 17th centuries. St. Bartholomew's Day massacre. Saint-Germain l'Auxerrois. The Louvre. Ancien Régime. Louvre Palace. Prostration.