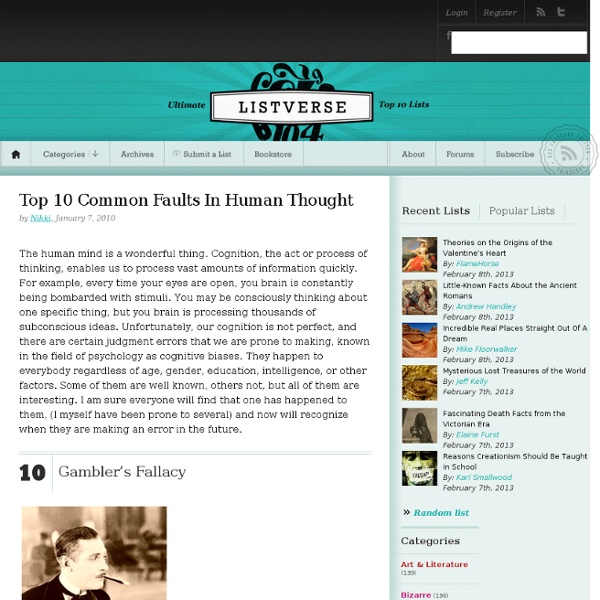 Humans The human mind is a wonderful thing. Cognition, the act or process of thinking, enables us to process vast amounts of information quickly. For example, every time your eyes are open, you brain is constantly being bombarded with stimuli. You may be consciously thinking about one specific thing, but you brain is processing thousands of subconscious ideas. Unfortunately, our cognition is not perfect, and there are certain judgment errors that we are prone to making, known in the field of psychology as cognitive biases. The Gambler’s fallacy is the tendency to think that future probabilities are altered by past events, when in reality, they are not. Reactivity is the tendency of people to act or appear differently when they know that they are being observed. Pareidolia is when random images or sounds are perceived as significant. Interesting Fact: the Rorschach Inkblot test was developed to use pareidolia to tap into people’s mental states. Self-fulfilling Prophecy

Top 10 Thinking Traps Exposed Our minds set up many traps for us. Unless we’re aware of them, these traps can seriously hinder our ability to think rationally, leading us to bad reasoning and making stupid decisions. Features of our minds that are meant to help us may, eventually, get us into trouble. Here are the first 5 of the most harmful of these traps and how to avoid each one of them. 1. The Anchoring Trap: Over-Relying on First Thoughts Inattentional blindness Also known as perceptual blindness, inattentive blindness results from a lack of attention that is not associated with vision defects or deficits, as an individual fails to perceive an unexpected stimulus in plain sight. When it becomes impossible to attend to all the stimuli in a given situation, a temporary “blindness” effect can occur, as individuals fail to see unexpected but often salient objects or stimuli.[1] The term was coined by Arien Mack and Irvin Rock in 1992 and was used as the title of their book of the same name, published by MIT press in 1998,[2] in which they describe the discovery of the phenomenon and include a collection of procedures used in describing it.[3] A famous study that demonstrated inattentional blindness asked participants whether or not they noticed a gorilla walking through the scene of a visual task they had been given.[1] Research on inattentional blindness suggests that the phenomenon can occur in any individual, independent of cognitive deficits.

The Science of Why We Don't Believe Science Illustration: Jonathon Rosen "A MAN WITH A CONVICTION is a hard man to change. Tell him you disagree and he turns away. Show him facts or figures and he questions your sources. Appeal to logic and he fails to see your point." So wrote the celebrated Stanford University psychologist Leon Festinger (PDF), in a passage that might have been referring to climate change denial—the persistent rejection, on the part of so many Americans today, of what we know about global warming and its human causes.

List of cognitive biases Systematic patterns of deviation from norm or rationality in judgment The loss aversion cognitive bias has been shown in monkeys Cognitive biases are systematic patterns of deviation from norm and/or rationality in judgment. They are often studied in psychology and behavioral economics.[1] Although the reality of most of these biases is confirmed by reproducible research,[2][3] there are often controversies about how to classify these biases or how to explain them.[4] Gerd Gigerenzer has criticized the framing of cognitive biases as errors in judgment, and favors interpreting them as arising from rational deviations from logical thought.[5] Explanations include information-processing rules (i.e., mental shortcuts), called heuristics, that the brain uses to produce decisions or judgments.

Thoughts on Consciousness So yesterday, I went to a lecture about consciousness by a neuroscientist called Murray Shanahan, from Imperial College. It was about how consciousness is constructed within the brain, how networks of neurons connect together to create hierarchies of thought and other such clever stuff. To be honest, most of it went right over my head. Total mindfuck.

Why We Believe Our Own Lies 0 Share Synopsis The power of cognitive dissonance in our daily lives. Why You Can’t Trust Yourself - Mark Manson - Pocket Bertrand Russell famously said, “The whole problem with the world is that fools and fanatics are so certain of themselves and wiser people so full of doubts.” Over the years, I’ve hammered on the importance of becoming comfortable with uncertainty and ambiguity, in questioning all of your most cherished beliefs and dreams, on practicing skepticism, and doubting everything, most importantly yourself. Throughout these posts, I’ve hinted at the fact that our brains are fundamentally unreliable, that we really have no clue what we’re talking about, even when we think we do, and so on. But I’ve never given concrete examples or explanations. Well, here they are. Eight reasons you can’t trust yourself, as demonstrated by psychology.

Research Shows That the Smarter People Are, the More Susceptible They Are to Cognitive Bias Editors’ Note: The introductory paragraphs of this post appeared in similar form in an October, 2011, column by Jonah Lehrer for the Wall Street Journal. We regret the duplication of material. Here’s a simple arithmetic question: A bat and ball cost a dollar and ten cents. The bat costs a dollar more than the ball. Swans on Tea » The Illusion of Knowledge Over at Backreaction Current illusions such as the idea that if it’s on the internet, and especially if it’s in an oft-visited location, then it must be true (argument from popularity), if it can’t be explained in a short presentation, it must be false (argument from incredulity), if it’s not on the internet then it must be false, newer information is always better, and others. I think some of this is a remnant of the idea that if something appears in print, it must be true — print used to be instant credibility in part because print was relatively expensive. The cost aspect was especially true in the earliest days, and you wouldn’t bother to commit something to writing unless it was very important, but before mass-printing, that was often spiritual truth rather than scientific truth.

Tapping our powers of persuasion Most psychologists will read this “Questionnaire” with Robert Cialdini, PhD. That may or may not be true, but according to Cialdini, that statement is powerfully persuasive because we tend to go along with our peers. Cialdini, who retired last year from a teaching and research position at Arizona State University in Tempe, Ariz., is a renowned expert in the science of swaying. In his seminal book on the topic, “Influence: The Psychology of Persuasion” (Quill, 1984), he went undercover to learn the tricks mastered by used-car dealers and Fortune 500 executives alike, bringing persuasion research to psychology’s forefront. Cialdini distilled his findings into six “weapons of influence,” each grounded in how we perceive ourselves or others:

Very interesting stuff....it makes me think of most people I know who don't seem aware of themselves or how things and events are signs of the reality we live in. Gambling is a perfect one =\ by awayfromspace Feb 2