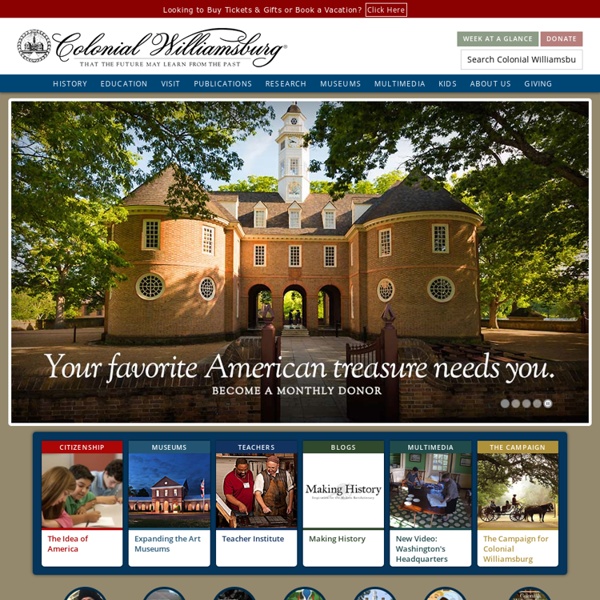 What is Colonial Williamsburg?Close In Colonial Williamsburg's 301-acre Historic Area stand hundreds of restored, reconstructed, and historically furnished buildings. Costumed interpreters tell the stories of the men and women of the 18th-century city—black, white, and native American, slave, indentured, and free—and the challenges they faced. In this historic place, we help the future learn from the past. Related videos:

Introduction to 18th-Century Fashion Formal ensemble, about 1765. Museum no. T.137 to B.1932 Men's Dress Cryptography Cryptography started with the Revolutionary War. Secret codes have been used a lot during wars. Even our first president, George Washington, used cryptography during this war. Some codes turn letters into numbers, like the one George used. An example of a code like this is one where wind is 679 and wood is 688. Anti-Slavery Songs Music is a powerful tool for the promotion of any cause; this page is devoted to the study of songs for one of the highest causes, human freedom. What exactly is freedom? The term is used in many ways, but this is the definition which is relevant to this project: Freedom is the absence of forcible constraint on actions which do not violate the rights of others. Most restrictions on freedom are caused by government, since governments possess a legal monopoly on the use of force.

Surveyors and Mapmakers From the founding of the colony, Virginia's surveyors and mapmakers charted westward expansion, internal development, and natural resources. Colonial surveyors were generally literate men who learned their craft from books on surveying or through experience. Among Virginia's early surveyors were John Henry (father of Patrick Henry), Peter Jefferson (father of Thomas Jefferson), and George Washington. Surveyors, especially those who were appointed as surveyors for a county, were key figures in colonial society. George Washington was not the only surveyor to use skill to increase his holdings of land, the basis of wealth and social status in colonial Virginia. Virginians' pattern of settling land in advance of surveying was common to the southern colonies. Digital Classroom Welcome to one of the largest online collections of primary sources and historical periodicals about the women's suffrage movement. This learning module investigates how the suffragists embraced the First Amendment as a tool to help achieve their goal. From the early national conferences to the founding of publications dedicated to women's rights, suffragists exercised all five freedoms and pioneered new forms of dramatic protest. As you explore, you'll develop a deeper understanding of the women's suffrage movement that goes beyond the famous names and iconic images to reveal the roots of today's social and political movements. This site includes: There's more to see and do!

Eighteenth-Century Clothing Men and women wore very different clothes at the beginning of the eighteenth century than they did at the end. The skill of tailors and dressmakers had developed to such an extent that clothing styles were lavished with attention to detail and ornament by midcentury. However, despite the growing skills of tailors, dress became simpler by the end of the century. The dramatic changes reflected the political and cultural changes during the century, including the American (1775–83) and French (1789–99) Revolutions. Throughout Europe and the newly created United States of America, people's attitudes about dress changed. No longer were the monarchs the only trendsetters of fashion.

Nathan Hale Connecticut's Nathan Hale is famous as the young spy who regretted that "I have but one life to lose for my country" when he was captured and executed by British troops in 1776. Born in Coventry, Connecticut, on June 6, 1755, Hale graduated from Yale University in 1773 and was given a Master of Arts degree by the school three years later. He taught in Connecticut schools until 1775 when he exhorted his fellow New London citizens to support the American cause at a town meeting after receiving word of the battles of Lexington and Concord. Hale was commissioned a lieutenant in the Connecticut militia in July 1775 and then promoted to captain in the Continental Army in January 1776. In early May he led a daring raid on a British supply sloop, capturing it and earning the notice of his commanders.

Coded Communication Perhaps the best known use of spirituals in the service of freedom during the slave period was the imbedding of “hidden” or coded messages in song lyrics for the purpose of clandestine (secret) communication on the Underground Railroad 12 . One of the first public revelations by a former slave of this practice of secret communication through spirituals is found in the autobiographical writings of the noted Black abolitionist Frederick Douglass, in which Douglass revealed to his readers that some songs interpreted by outsiders as referring to life after death in Heaven 13 , were actually understood within the enslaved African community as signifying a determination to reach freedom in the North, outside the reach and power of Southern plantation owners. Two common types of coded spirituals were signal songs and map songs. In a signal song 14 , a singer or group of singers communicated in code that a certain event – such as a planned escape from a plantation – was imminent.

everybody makes mistakes so don't worry about it. by rcracer Jun 17

This is a remarkable historical website for social studies students grade 4-8th, just make sure to check out the 'Kid's' center for easier access. Here you'll find a variety of interactive educational activities and fun review games such as "Colonial Word Search" and "Name That Founding Father." by jlehman Jun 17

This source helps me with my topic of mistakes. The philospher John Lockes believes all people are born good. Which is parralell to my opionion. That good people mess up and make mistakes. by maggiee2246 Apr 10