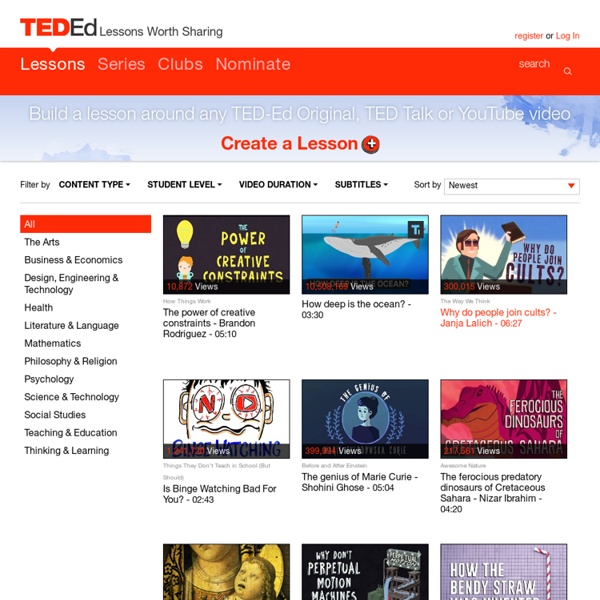 18 Animations of Classic Literary Works: From Plato and Shakespeare, to Kafka, Hemingway and Gaiman Yesterday we featured Piotr Dumala's 2000 animation of Fyodor Dostoyevsky’s classic novel, Crime and Punishment, and it reminded us of many other literary works that have been wonderfully re-imagined by animators -- many that we've featured here over the years. Rather than leaving these wondrous works buried in the archives, we're bringing them back and putting them all on display. And what better place to start than with a foundational text -- Plato's Republic. We were tempted to show you a claymation version of the seminal philosophical work (watch here), but we decided to go instead with Orson Welles' 1973 narration of The Cave Allegory, which features the surreal artistic work of Dick Oden. Staying with the Greeks for another moment ...

Search for WebQuests Latest news: June 17, 2015: This year marks the 20th anniversary of the WebQuest model. Watch this space for announcements of some new resources coming later this summer! October 22, 2008:WebQuests and Web 2.0? This webinar conducted by the Discovery Education Network features a discussion about how blogs and wikis fit into the WebQuest model. You can view the archive here. 5 Reasons to Try iBooks Author There are so many ways that iPads can be used in the classroom, and one of my favorite things about these tablets is the ability to use iBooks with students. Although there are tons of great options available in the iBookstore, there is a program for MacBooks that let users create their very own interactive books for iPads. This free program gives teachers the ability to create iBooks that can be shared with students by adding them to individual devices or published to the iBookstore to share with the world. 1.

Dumb Laws in Utah. Crazy Utah Laws. We have weird laws, strange laws, and just plain crazy laws! Dumb Laws in Utah It is a felony to persistently tread on the cracks between paving stones on the sidewalk of a state highway. It’s legal for restaurants to serve wine with meals, but only if you ask for the wine list. It is considered an offense to hunt whales. 10 Word Cloud Generators You Have Probably Never Tried A few days back, we looked at five great ways to incorporate word cloud generators into your classroom. There are obviously many more uses out there for them – but that is a discussion for another post. We’ve mentioned most of these before – in a post from way back when – so I won’t go into too much detail about each individual one, but we’ve added a few notable ones to the list. (Of note, the list is in no particular order). The vast majority of them work the same: plug your text into the box, select a few options, and you’ve got yourself a word cloud.

SchoolsWorld Why do children lie? We look at some of the different types of lies children tell, and the possible reasons behind them... Find out how a can-do attitude, a little self-belief, and a willingness to get things wrong sometimes can set a good... Family & Consumer Sciences Student Web Links Child Development & Child Care Child Care Resources Children's Health & Safety Children's Learning Child Advocacy Child Care Resources

Education ThingLink for teachers and schools Create visual experiences for student-centered learning Start now The top 25 Bushisms of all time. I started gathering Bush's verbal slip-ups while covering his first presidential campaign. From the first one we published in Slate in October 1999—"The important question is, how many hands have I shaked?"—adding to the collection has been my main pleasure, perhaps my only pleasure, in watching the man. Since then, I've collected—with help from Slate readers—more than 500 Bushisms. What follows is a list of my 25 favorites.