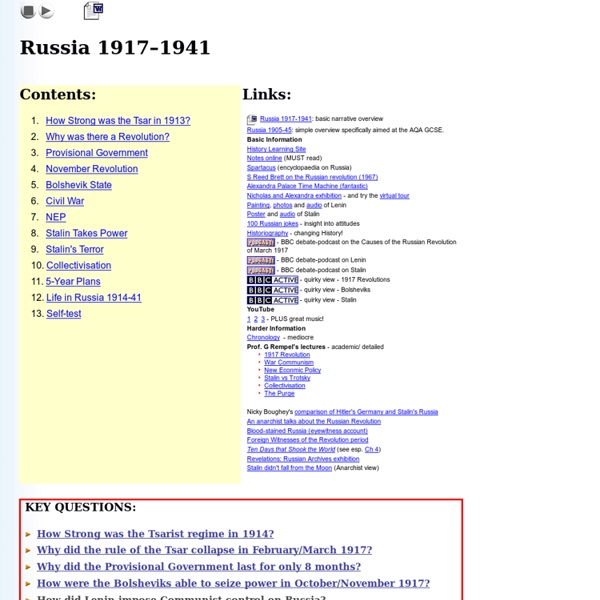 In this module you will learn: • FIVE strengths and SEVEN weaknesses of the Tsar’s Government in 1913 • FIVE causes of the March 1917 Revolution [Why Was There A Disaster?] • Events on the SIX days of the March Revolution • SIX problems of the Provisional Government [Government That’s Provisional Will Be Killed] • Events of the Provisional Government, March – November 1917 • THREE days of Bolshevik Revolution, 6–8 November 1917 • SEVEN reasons the Bolsheviks won [Perhaps Seven Powers Gave Lenin An Opportunity] • SIX characteristics of the Bolsheviks state [Great Big Changes Create Terrible War] • THREE causes of the Civil War [Causes of the Civil War] • SIX reasons the Bolsheviks won [Why The Bolsheviks Won The War] • SEVEN events of the Civil War, 1918–1921. • The New Economic Policy[NEP] • How Stalin took power [Stalin Takes Power] • SIX reasons Stalin introduced Collectivisation [Six Factors Now To Collectivise Kolkhoz] • A timeline of Collectivisation Related:  The Russian Revolution • Russian revolution

The Russian Revolution The webserver at Alpha History tells us you’re using an adblocking tool, plug-in or browser extension on your computer or network. We understand that many people don’t like web-based advertising. Ads on websites can often be irrelevant, distracting and ‘in your face’. Without ads, however, our website would not exist – or it would not be free. If you would like to use our website and its resources, please disable your adblocker or whitelist our website. To access the Alpha History website, please complete one of the following steps: * Disable or deactivate your adblocking software, tool or plug-in. * Whitelist our top level domain (alphahistory.com) in your adblocking software. Thank you for your understanding. Have a nice day! Alpha History staff

The Russian Revolution (2006) The 1905 Russian Revolution was a wave of mass political and social unrest that spread through vast areas of the Russian Empire. Some of it was directed against the government, while some was undirected. It included terrorism, worker strikes, peasant unrest, and military mutinies. It led to the establishment of limited constitutional monarchy, the State Duma of the Russian Empire, the multi-party system, and the Russian Constitution of 1906. The Russian Revolution is the collective term for a series of revolutions in Russia in 1917, which destroyed the Tsarist autocracy and led to the creation of the Soviet Union. The February Revolution (March 1917) was a revolution focused around Petrograd (now St. The Soviets (workers' councils), which were led by more radical socialist factions, initially permitted the Provisional Government to rule, but insisted on a prerogative to influence the government and control various militias. Watch the full documentary now

The Russian Revolution through the Prism of Propaganda | eHISTORY Why study the Russian Revolution? The Russian Revolution is one of the most important events of the twentieth century. In February 1917, Tsar Nicholas II abdicated, and a representative Provisional Government succeeded the autocracy. For much of the post-World War II period, the majority of people on the planet lived in a state that identified itself as either capitalist or socialist. Why study propaganda posters? Stalin: Man or Monster? :: Russian Russia History Stalin: Man or Monster? Do these sources give similar or different impressions of Stalin? These sources give different impressions of Stalin, however there are some similarities. Source A is a cartoon published in Paris in the 1930´s. It shows Stalin and the results of his policies according to the artist. This source is very famous and was drawn by an exiled Russian, therefore the artist could be bitter and biased against Stalin and his policies. Source B is an official Soviet painting of Stalin with workers at a hydroelectric power station in the 1930´s. Source C is a photograph of Stalin congratulating wives of army officers. The sources give very different impressions of Stalin. Source A shows Stalin to be a monster responsible for the death of millions of people. Source B shows Stalin to be a great man who made Russian industry prosper. However the source does not show the negative side of Stalin´s industrialization. However, sources B and C are similar in some ways.

Russian Revolution - Facts & Summary The February Revolution (known as such because of Russia’s use of the Julian calendar until February 1918) began on March 8, 1917 (or February 23 on the Julian calendar), when demonstrators clamoring for bread took to the streets in the Russian capital of Petrograd (now called St. Petersburg). Supported by huge crowds of striking industrial workers, the protesters clashed with police but refused to leave the streets. On March 10, the strike spread among all of Petrograd’s workers, and irate mobs destroyed police stations. On March 11, the troops of the Petrograd army garrison were called out to quell the uprising. The imperial government was forced to resign, and the Duma formed a provisional government that peacefully vied with the Petrograd Soviet for control of the revolution.

Using Hexagon Learning for categorisation, linkage and prioritisation | Tarr's Toolbox Note: I have created an online hexagons generator at ClassTools.net. The ability to select, prioritise, categorise and link evidence is a valuable skill that students learn in History. It is also highly transferable to other subjects. Using hexagons is a particularly simple and effective way of developing these skills. The approach involves providing students with key pieces of information on hexagons. Their job is to organise these into categories of their choice, with hexagons being placed adjacent to each other to highlight links between the factors described. These groups are then glued down onto sugar paper and then the diagram is developed with titles being written over each category, and arrows being used to connect the different categories and to chart a ‘path’ through the diagram. Taking it further The hexagons approach can be developed in a variety of ways, for example: Hexagon Learning Case Study: The Rise of Stalin Historical Context The Hexagon Approach Stage 3: Essay preparation

More from the 1905-1906 Russian Underground Press A few months back I posted images from 1905-1906 Russian revolutionary periodicals that I found at Yale University’s digital library. Recently I (accidentally) came across a related book called Blood and Laughter: Caricatures from the 1905 Revolution that contains more illustrations of the 1905-1906 Russian underground press. from Leshii (Woodgoblin) No. 2, 1906 "Sunday 9 January 1905: Hundreds of thousand of workers assemble in the streets of St Petersburg. They are in their Sunday best and accompanied by their elderly relatives and children. There are no banners or slogans though some carry icons or church emblems, for this is to be a peaceful demonstration led by an Orthodox priest, Father Gapon. For two cold hours they stand waiting in the snow for Tsar Nicholas to appear and receive their petition. Bloody Sunday killed superstition, the old faith in a just Tsar, and unleashed a tumultuous rage among the masses. Russia had a rich history of satirical journalism. "In the State Duma.

Marxist Internet Subject Archive Famous Quotes Famous quotes from Hegel, Marx, Engels, Lenin, Trotsky, Mao and other communists with links to the context on the Marxists Internet Archive. The only source on the internet of genuine, sourced Marxist quotations. In addition, you get a randomly selected “Quote-of-the-Day” from one of the collections, for you to ponder. Selected Marxist Writers The works of 18 pre-World War Marxists, who together provide a broad base of Marxist thinking shared across most of the differing currents of communism of the present time: Karl Marx, Frederick Engels, Paul Lafargue, Karl Kautsky, George Plekhanov, Clara Zetkin, Daniel De Leon, Vladimir Lenin, Nikolai Bukharin, Leon Trotsky, Alexandra Kollontai, James Connolly, Rosa Luxemburg, José Carlos Mariátegui, Antonio Gramsci, M.

Russia - VCE History - Revolutions - Research Guides at State Library of Victoria The subject of history is the study of past events. A historian is someone who researches these events and interprets them. Different historians may judge the causes and effects of historical events differently and may place greater emphasis on certain documents or evidence to form their conclusions. Historians may also approach and interpret evidence through their own personal perspectives, influenced by their background and political, ideological or social beliefs. Choose from the tabs above for suggestions of texts written from a specific perspective. Historiography of the Russian revolution These articles may help broadly understand the range of perspectives historians bring to the Russian revolution, and the different issues that influence interpretations of events. Warth, Robert D. Alpha history This site has been developed to support VCE students and includes excellent overviews of each of the VCE Revolutions topics. Reviews of books

History -Russian revolution Thousands of Australian students are taught that robots led the Russian Revolution Kinja is in read-only mode. We are working to restore service. Holy crap you're right! Flagged Shit, it wasn't 1999! I'm not quite sure of the legalities, but sometime around the time that Robotech went to air in North America, using footage borrowed from Macross, FASA also published their Battletech miniatures wargame, and the related Mechwarrior RPG. FASA licensed the design.. but from the original production company. I think FASA took the right idea when after all that they went "No more licensed designs".

The Russian Revolution (1917–1918): Key People & Terms People Alexander I The Russian tsar, or emperor, whose death in 1825 prompted a mild secession crisis that created an appearance of weakness in the Russian monarchy. A group of 3,000 soldiers who termed themselves Decembrists took advantage of the chaos to demand reforms, such as a written constitution for Russia. Later revolutionaries such as Lenin saw the Decembrists as heroes. Alexander II The Tsar who formally abolished serfdom in 1861, freeing Russia’s serfs from indentured servitude to their landowners. Alexander III The son of and successor to the assassinated Tsar Alexander II. Felix Dzerzhinsky A Polish-born revolutionary who joined the Bolshevik Party after getting out of prison in 1917. Lev Kamenev (a.k.a. A prominent member of the Bolshevik Party who initially resisted Lenin’s call to hold a revolution sooner rather than later. Alexander Kerensky A member of the Socialist Revolutionary Party and an active participant in both the provisional government and the Petrograd Soviet.

Engels' burial speech The Death of Karl Marx Transcribed: by Mike Lepore, 1993. On the 14th of March, at a quarter to three in the afternoon, the greatest living thinker ceased to think. He had been left alone for scarcely two minutes, and when we came back we found him in his armchair, peacefully gone to sleep -- but for ever. An immeasurable loss has been sustained both by the militant proletariat of Europe and America, and by historical science, in the death of this man. But that is not all. Two such discoveries would be enough for one lifetime. Such was the man of science. For Marx was before all else a revolutionist. And, consequently, Marx was the best hated and most calumniated man of his time. His name will endure through the ages, and so also will his work.