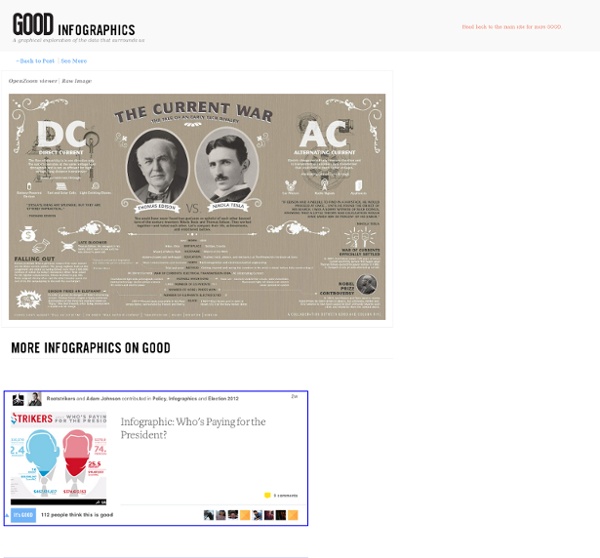 Is College Really Worth It? Is going to college really worth it? Probably so, but it's not that clear cut, and economics have been arguing the point for 30 years. Most studies tend to show that college-educated people end up making far more money in the course of their lifetimes. (The niggle: Usually, it's not worth paying for a private university.) Still, that evidence isn't totally cut and dry: What do you really learn in college? Is what you learned in college really what's producing the value? This graph makes a couple points in that debate: 1. But who in their right mind wouldn't recommend a college degree? If I had a guess, I think it's precisely that attitude that creates all the economic advantages--its the way our society is organized, rather than anything about college itself. [View more Infographics of the Day]

Not a Drop to Drink More Infographics on Good Ancient People Are Still Awesome: Centuries-Old Japanese Tsunami Warning Markers Saved Lives "High dwellings are the peace and harmony of our descendants," reads the centuries-old stone tablet above. "Remember the calamity of the great tsunamis. Do not build any homes below this point." This marker, and several more like it, some more than 600 years old, "dot the coastline" of Japan, according to a report in The Canadian Press. Not all of them were quite as specific: Some acted more as general warnings, lasting reminders of a risk that might only recur every fourth or fifth generation. One, in the coastal town of Kesennuma, gave instructions: "Always be prepared for unexpected tsunamis. But in the tight-knit community of Aneyoshi, where marker pictured above still stands, the wisdom of their ancestors saved the homes and the lives of the tiny village's inhabitants. Everybody here knows about the markers. Image via the Star-Telegram; story via @stevesilberman.

US History Presentation US History Colonial America (1690 - 1754) The Early Republic (1754 - 1837) The Crisis of the Republic (1837 - 1877) Wealth, Innovation, and World Power (1877 - 1913) Into the American Century (1913 - 1945) America as a Superpower (1945 - 2001) Hope, Adversity and Challenges for the New Century (2001 - 2009) Warning: this section of the book should not be used for academic studies because it deals in events that are too recent for "historical perspective". Appendices Keywords (People, events, etc) Related Wikibooks The Annotated Constitution of the United States Related Wikipedia articles External links

10 Historical Myths We Need to Stop Believing | GeeKiez We’ve talked before about a few scientific misconceptions we still have, now let’s look at a few historical ones 1. Napoleon wasn’t short. 2. 3. 4. 5. 300 Spartans fought the Persians. 6. 7. 8. 9. 10. Those are 10 historical misconceptions, but there are plenty more out there. About The Author Radu Hey, there! China vs United States As we discussed in yesterday’s post, whether the United States and China like it or not, the economic futures of both countries are intertwined. Everyone knows that China’s got more people and that its importance as an economic superpower has escalated in recent years. What you might not understand is how the differences between our countries, in economic philosophy, in population, in geography and in how the military is built and paid for ultimately play into the entire economic relationship. For many China remains something of a mystery. For more personal finance visualizations see: WallStats.com

Are the Richest Americans Also the Best Educated? More Infographics on Good A People's History of the United States The Note: This great book should really be read by everyone. It is difficult to describe why it so great because it both teaches and inspires. You really just have to read it. We think it is so good that it demands to be as accessible as possible. Once you've finished it, we're sure you'll agree. In fact, years ago, we would offer people twenty dollars if they read the book and didn't think it was completely worth their time. The disclaimer: This version is made from OCR.

The Incredible Subterranean City of Kish The island of Kish is a resort island located off the coast of Iran. Although it is well known as a tourist destination, it is also steeped in history. One of the most magnificent features of this island is its massive subterranean city covering an area of 10,000 square metres, constructed from its ancient underground aqueduct (or ‘kariz’). The kariz of Kish is said to have been built about 2500 years ago by the inhabitants of Harireh city. This structure was built to collect, purify, and store water for the inhabitants of the island. As the island is situated in a region with an arid climate, this was essential for their survival. Water would have been first collected from interconnected wells in an area of 14 km². The underground city of Kish. The kariz of Kish was abandoned a long time ago, and was forgotten by the inhabitants of the island. Ancient artifacts have been preserved and put on display in the now modernised city. Featured image: Inside the tunnels of the kariz of Kish.

True Colors Infographic - Breakdown of Color Preferences by Gender From the day that babies are brought home and cradled in their pink or blue blankets, implications have been made about gender and color. While there are no concrete rules about what colors are exclusively feminine or masculine, there have been studies conducted over the past seven decades that draw some generalizations. Let’s take a look at what they say about color and gender. Click on the graphic below for an enlarged view: View an enlarged version of this infographic » Click here for a .pdf version of this infographic. Blue is the most popular color for both men and women.The most unpopular color for men is brown.The most unpopular color for women is orange.This data should only be used as an initial starting point if it is going to be used to drive a design. About The Author: Sean Work is the marketing coordinator at KISSmetrics.

Educating the Workforce of the Future More Infographics on Good