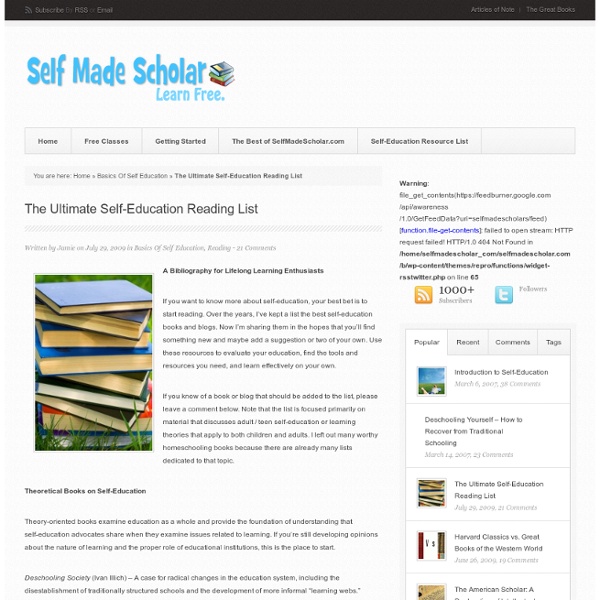 A Bibliography for Lifelong Learning Enthusiasts If you want to know more about self-education, your best bet is to start reading. Over the years, I’ve kept a list the best self-education books and blogs. If you know of a book or blog that should be added to the list, please leave a comment below. Theoretical Books on Self-Education Theory-oriented books examine education as a whole and provide the foundation of understanding that self-education advocates share when they examine issues related to learning. Deschooling Society (Ivan Illich) – A case for radical changes in the education system, including the disestablishment of traditionally structured schools and the development of more informal “learning webs.” Pedagogy of the Oppressed (Paulo Freire) – An education critic argues against the theory of “banking,” claiming that a student is more than an empty vessel waiting to be filled with knowledge from a teacher. Practical Books on Self-Education Self-University (Charles D.

The Art of Self-Education — Information, inspiration and resources for adult self-learners. Free video lectures,Free Animations, Free Lecture Notes, Free Online Tests, Free Lecture Presentations Free eBooks at Planet eBook - Classic Novels and Literature RaceBannon.com — Online Home for Race Bannon and Race Bannon Media Curriculum Offered - Technology Engineering Science Leadership Academy Broadly defined, project based learning integrates many characteristics which include but are not limited to interest driven learning, which is student centered. This kind of learning starts with an essential or driving question, is inquiry based, promotes reflection, is collaborative, promotes critical thinking, promotes communication, is highly engaging and integrates many content areas (BIE, 2003; Boss & Kraus, 2007; Edutopia, 2008; Papert, 2010). Paulo Freire and Seymour Papert defined project based learning as the “pedagogy of the question not the answer” (youtube.com, 2010). On a more structured end of the project based learning continuum, students go through an extended process of inquiry in response to a complex question, problem, or challenge.

Top 10 Mysterious People Mysteries Over the centuries, history is filled with wonderful tales of mysterious people – many of whom are never identified. This list is a selection of the most significant or mysterious people of this variety. As usual, if you know of other fascinating people that would suit a similar follow up list, be sure to tell us in the comments. Monsieur Chouchani (died 1968) is the nickname of an anonymous and mysterious Jewish teacher who taught a number of highly regarded students including Emmanual Levinas (pictured above) and Elie Wiesel in Europe after World War II. There is no known body of work by Chouchani himself, but he left a very strong intellectual legacy via his students. The Poe Toaster is the nickname given to a mysterious man who pays annual tribute to Poe by visiting his grave every year. The Toaster wears a black hat and coat and hides his face with a hood or scarf. During the analysis of the film footage of the assasination of John F. Fulcanelli (1839 – ? D. Jamie Frater

Resources For Self-Education — The Art of Self-Education The web is a boon to self-education. Using the internet you can access a vast array of information, tutorials, classes, elearning, research databases, online magazines and newsletters, blogs, books, videos, audio, and the offerings keep growing. Most are free and if you’re clever you can usually find a free alternative to learn just about anything. But there are plenty of great sites and online classes that charge a fee that might just be worth it. Search Engines – The Primary Research Databases The basic search engines we use every day (and some lesser known ones) are still among the best online research databases available. We all know the big few search engines that have risen to the top in popularity: google.com , yahoo.com and ask.com . For a great list of search engines that includes web search engines, metasearch engines, desktop search tools, web portals, and vertical market websites, visit the List of Search Engines offered by the free online encyclopedia, Wikipedia . Database.

My Father's Dragon.My Father's Dragon. My Father's Dragon by Ruth Stiles Gannett (1923-) Illustrations by Ruth Chrisman Gannett (1896-1979) New York: Random House, 1948. Copyright not renewed. A Newbery Honor Book, 1949. [Cover] [End Papers] [Full Image] [Title Page] Chapter One One cold rainy day when my father was a little boy, he met an old alley cat on his street. This surprised the cat – she had never before met anyone who cared about old alley cats – but she said, "I'd be very much obliged if I could sit by a warm furnace, and perhaps have a saucer of milk." "We have a very nice furnace to sit by," said my father, "and I'm sure my mother has an extra saucer of milk." My father and the cat became good friends but my father's mother was very upset about the cat. This made my father very sad, and he apologized to the cat because his mother had been so rude. "Would you like to fly very, very much?" "I certainly would. "You mean you know where I could get an airplane?" "Well, not exactly an airplane, but something even better.

Aztec Gods and Goddesses Aztec Gods and Goddesses Religion was extremely important in Aztec life. They worshipped many gods and goddesses, each of whom ruled one or more human activities or aspects of nature. The people had many agricultural gods because their culture was based heavily on farming; also they included natural elements and ancestor-heroes. They believed that the balance of the natural world, the processes that make life possible - like the rain or solar energy - and that the destiny of people depended on the will of these gods. The Aztecs thought that the power of the gods should be acknowledged and thanks given to them, in the form of gifts so as to avoid the catastrophes that their rage or indifference could cause. Deity Impersonation An important aspect of Aztec ritual was the impersonation of deities. Aztec Gods Centeotl Corn god. Chalchiuhtlicue In Aztec mythology, Chalchiuhtlicue (also Chalciuhtlicue, or Chalcihuitlicue) ("She of the Jade Skirt") was the goddess of lakes and streams. Chantico