16 Things I Wish They Had Taught Me in School 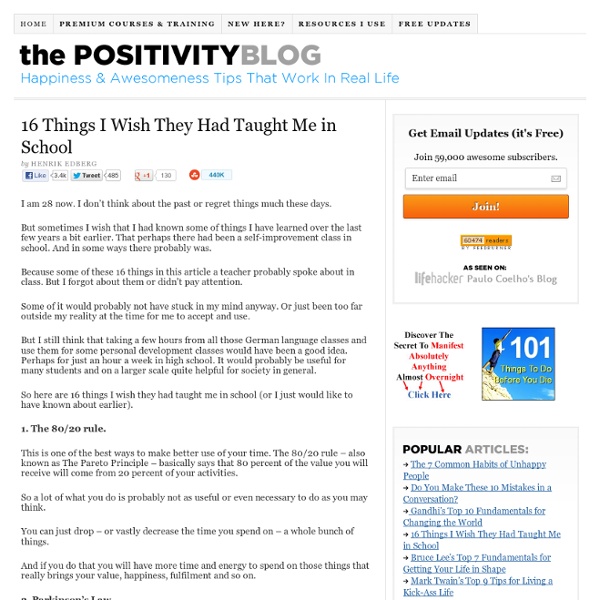 I am 28 now. I don’t think about the past or regret things much these days. But sometimes I wish that I had known some of things I have learned over the last few years a bit earlier. That perhaps there had been a self-improvement class in school. And in some ways there probably was. Because some of these 16 things in this article a teacher probably spoke about in class. Some of it would probably not have stuck in my mind anyway. But I still think that taking a few hours from all those German language classes and use them for some personal development classes would have been a good idea. So here are 16 things I wish they had taught me in school (or I just would like to have known about earlier). 1. This is one of the best ways to make better use of your time. So a lot of what you do is probably not as useful or even necessary to do as you may think. You can just drop – or vastly decrease the time you spend on – a whole bunch of things. 2. You can do things quicker than you think. 3. 4. 5.

Sleep, Learning, and Memory The Learning Process and Sleep Sleep, learning, and memory are complex phenomena that are not entirely understood. However, animal and human studies suggest that the quantity and quality of sleep have a profound impact on learning and memory. Research suggests that sleep helps learning and memory in two distinct ways. First, a sleep-deprived person cannot focus attention optimally and therefore cannot learn efficiently. 7 Smart Ways to Deal with Toxic People Don’t let toxic people rent space in your head. Raise the rent and get them out of there. Surviving the ups, downs, and lightning storms of other people’s moodiness can be quite a challenge. It’s important, though, to remember that some moody, negative people may be going through a difficult stage in their lives. They may be ill, chronically worried, or lacking what they need in terms of love and emotional support.

Dont Ever Let This One Thing Crush You And Your Dreams I’ve tried pretty much everything in the way of increasing productivity… I’ve created to do lists, checklists, and goals for each day. I’ve dedicated special blocks of every day to writing, email, product creation, you name it. I’ve read books about how to maximize productivity, how to get more done in less time, while at a higher quality. Of everything I’ve read and out of everything I’ve tried, the greatest ally, tactic, or tip I’ve come across thus far, was given to me by Steven Pressfield, in his books, The War of Art 25 TED Talks that will change how you see the world Mahatma Gandhi once said, “Live as if you were to die tomorrow. Learn as if you were to live forever.” If this sounds like a philosophy you can relate to, then you’ll love TED talks. These informational 17 minute presentations are given at annual conferences by some of the world’s greatest thinkers. Their aim is simple: To inspire ideas and change attitudes around the world. As of April 2014, there were over 1,700 of these incredible talks available free online to choose from.

Tips For A Better Life - Ham and Heroin Take a 10-30 minutes walk every day. Sit in silence for at least 10 minutes each day. Sleep for 7 hours. Live with the 3 E’s — Energy, Enthusiasm, and Empathy. Play more games. Read more books than you did the previous year. 5 Scientific Ways to Instantly Brighten Your Day  How nice would it be to push a button and instantly feel happy, uplifted, and fun? Turns out you can. Or at least exert the same amount of effort for the same results. Recent studies are upending the age-old belief that emotions just happen to us.

One Woman's Lessons From Living On The Street Susan sits on a park bench in Washington, D.C. She has struggled with homelessness for nearly two decades. Gabrielle Emanuel/NPR hide caption Opinion / Op-Ed : A difficult journey, some difficult decisions My visit to Gujarat One of the pillars of development that I have thought a lot about is that we have to create a nation where poverty has been totally eradicated and illiteracy removed. Alongside, we need to evolve a society where crimes against women and children are absent and none in the society feels alienated. These thoughts were prominent in my mind during my visit to Gujarat in August 2002, which I took up as my first major task immediately after becoming President. The State had been hit by riots a few months earlier, and their impact had left thousands of lives in disarray. It was an important and sensitive task, because it took place under unique circumstances, in a politically charged atmosphere.

Ten Principles To Live By In Fiercely Complex Times If you're like most people I work with in companies, the demands come at you from every angle, all day long, and you have to make difficult decisions without much time to think about them. What enduring principles can you rely on to make choices that reflect openness, integrity and authenticity? Here are ten that work for me: 40 Ways to Feel More Alive “I don’t believe people are looking for the meaning of life as much as they are looking for the experience of being alive.” ~Joseph Campbell As I write this, I am two hours away from my first weekly acting class in Los Angeles. I’ve been here for almost two years now, and though I loved Community Theater as a kid, I never so much as researched acting classes until a couple weeks back. I frequently said I wanted to do it, along with painting classes, which I’m starting next week, but I always made excuses not to start either.

How to Find Your Purpose and Do What You Love “Find something more important than you are,” philosopher Dan Dennett once said in discussing the secret of happiness, “and dedicate your life to it.” But how, exactly, do we find that? Surely, it isn’t by luck. I myself am a firm believer in the power of curiosity and choice as the engine of fulfillment, but precisely how you arrive at your true calling is an intricate and highly individual dance of discovery. Still, there are certain factors — certain choices — that make it easier. Meghamalai – A walk in the clouds By Ramya Sriram If you're looking for a quiet escape to untouched, pristine lands, less of which seem to be remaining every day, then Meghamalai's your answer. Tucked away in the clouds of the Western Ghats, this little-accessible mountain range offers gorgeous views of lush green mountains, dense forests, teal lakes and, above all, peace. Pruning tea at the Woodbriar estate.

Text therapy on rise to help address youth mental health issues Forget the conventional images that come to mind when you think of psychologists, like chaise longues and notepads. Swap in smartphones and tablets — that could be the future of modern psychotherapy, based on the changing ways young people are communicating. Youth-oriented services in Canada, like Kids Help Phone, are adapting to social-media-focused millennials by creating new ways for young people to connect with counsellors. The 25-year-old organization now offers an instant messaging service which can be accessed through the Kids Help Phone app or by computer.