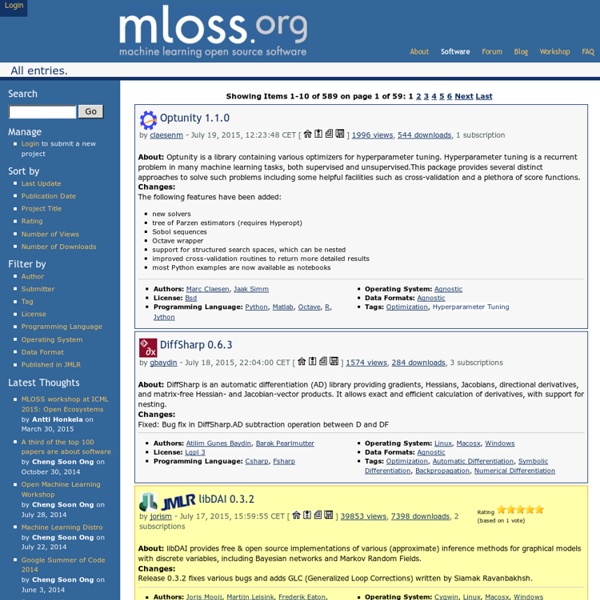 Weka 3 - Data Mining with Open Source Machine Learning Software in Java Weka is tried and tested open source machine learning software that can be accessed through a graphical user interface, standard terminal applications, or a Java API. It is widely used for teaching, research, and industrial applications, contains a plethora of built-in tools for standard machine learning tasks, and additionally gives transparent access to well-known toolboxes such as scikit-learn, R, and Deeplearning4j. DownloadDocsCoursesBook

Projects matching python. About: BayesOpt is an efficient, C++ implementation of the Bayesian optimization methodology for nonlinear-optimization, experimental design and stochastic bandits. In the literature it is also called Sequential Kriging Optimization (SKO) or Efficient Global Optimization (EGO). There are also interfaces for C, Matlab/Octave and Python. Changes: -Complete refactoring of inner parts of the library. -Updated to the latest version of NLOPT (2.4.1). -Error codes replaced with exceptions in C++ interface. -API modified to support new learning methods for kernel hyperparameters (e.g: MCMC). -Added configuration of random numbers (can be fixed for debugging). -Improved numerical results (e.g.: hyperparameter optimization is done in log space) -More examples and tests. -Fixed bugs. -The number of inner iterations have been increased by default, so overall optimization time using default configuration might be slower, but with improved results.

Generalized linear model In statistics, the generalized linear model (GLM) is a flexible generalization of ordinary linear regression that allows for response variables that have error distribution models other than a normal distribution. The GLM generalizes linear regression by allowing the linear model to be related to the response variable via a link function and by allowing the magnitude of the variance of each measurement to be a function of its predicted value. Intuition[edit] Ordinary linear regression predicts the expected value of a given unknown quantity (the response variable, a random variable) as a linear combination of a set of observed values (predictors). However, these assumptions are inappropriate for many types of response variables. Similarly, a model that predicts a probability of making a yes/no choice (a Bernoulli variable) is even less suitable as a linear-response model, since probabilities are bounded on both ends (they must be between 0 and 1). Overview[edit] Model components[edit] 1. as

SourceForge.net: boost your Machine Learning projects - Project Web Hosting - Open Source Software projects:lasvm [Léon Bottou] 1. Introduction LASVM is an approximate SVM solver that uses online approximation. It reaches accuracies similar to that of a real SVM after performing a single sequential pass through the training examples. Further benefits can be achieved using selective sampling techniques to choose which example should be considered next. As show in the graph, LASVM requires considerably less memory than a regular SVM solver. See the LaSVM paper for the details. 2. We provide a complete implementation of LASVM under the well known GNU Public License. This source code contains a small C library implementing the kernel cache and the basic process and reprocess operations. These programs can handle three data file format: LIBSVM/SVMLight files These files represent examples using a simple text format. <line> = <target><feature>:<value> ... The target value and each of the feature/value pairs are separated by a space character. Binary files Binary files take less space and load faster. Split files