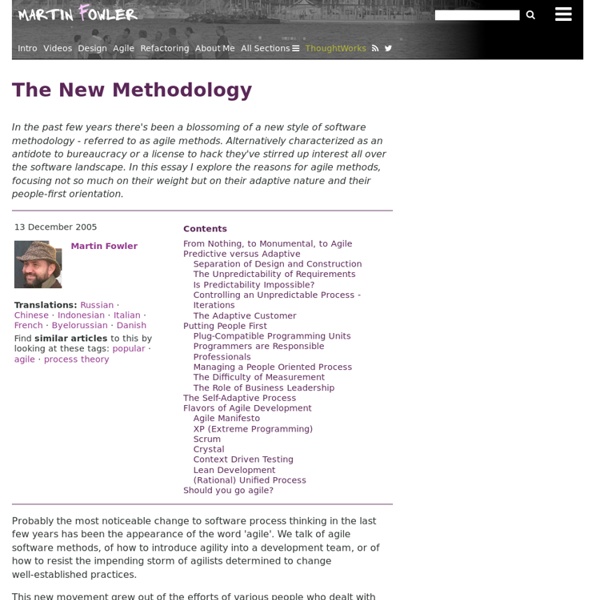 In the past few years there's been a blossoming of a new style of software methodology - referred to as agile methods. Alternatively characterized as an antidote to bureaucracy or a license to hack they've stirred up interest all over the software landscape. In this essay I explore the reasons for agile methods, focusing not so much on their weight but on their adaptive nature and their people-first orientation. Probably the most noticeable change to software process thinking in the last few years has been the appearance of the word 'agile'. We talk of agile software methods, of how to introduce agility into a development team, or of how to resist the impending storm of agilists determined to change well-established practices. This new movement grew out of the efforts of various people who dealt with software process in the 1990s, found them wanting, and looked for a new approach to software process. This essay was originally part of this movement. From Nothing, to Monumental, to Agile . Related:  Teaching

Tracking Movers & Shakers: Tackling Human Resources News Classification A detailed review of CB Insights' HR news classification algorithms using supervised machine learning. Post by Bugra Akyildiz (@bugraa) — Machine Learning Engineer at CB Insights One of the critical inputs in our efforts to assess private company health is the tracking of their human resources activities. hiring activity as evidenced by job postings (you can find these on a company’s profile under Performance Metrics)key hires and departures The focus of this post is on bullet #2 above. Problem Introduction (Technical) Executive moves are a signal of company momentum This news is important for a number of reasons: Hiring of certain key positions can be an indication of company plans & strategy. These are just a few illustrative examples of how this data can be useful to those who invest, acquire, sell to or buy from private companies. We are using supervised machine learning to help tackle this problem and deliver insights into HR health. Supervised Learning – The Basics Still reading? 1. 2.

Learn to Build Modern Web Apps with the AngularJS Tutorial | Thinkster Agile software development Agile software development is a set of principles for software development in which requirements and solutions evolve through collaboration between self-organizing,[1] cross-functional teams. It promotes adaptive planning, evolutionary development, early delivery, and continuous improvement, and it encourages rapid and flexible response to change.[2] Agile itself has never defined any specific methods to achieve this, but many have grown up as a result and have been recognized as being 'Agile'. The Manifesto for Agile Software Development,[3] also known as the Agile Manifesto, was first proclaimed in 2001, after "agile methodology" was originally introduced in the late 1980s and early 1990s. The manifesto came out of the DSDM Consortium in 1994, although its roots go back to the mid 1980s at DuPont and texts by James Martin[4] and James Kerr et al.[5] History[edit] Incremental software development methods trace back to 1957.[6] In 1974, E. The Agile Manifesto[edit] Agile principles[edit]

Building a Raspberry Pi Robot and Controlling it with Scratch Happy New Year everyone! Things have been a bit quiet on this blog due to the Christmas rush, and the fact that we’ve been spending time on product development (more on that in a future post). But here at last is the 3rd and final post in our series on the Raspberry Pi robot we […] Welcome to the second part of our series of posts, describing the workshop we ran at the recent Digimakers event at @Bristol. In the last post we described the outline of the workshop and looked at the hardware of the Raspberry Pi robot that we built for the event. Last weekend we ran a workshop at the Digimakers event at @Bristol where we taught people how to program a Raspberry Pi robot with the Scratch programming language. We had a great response to a recent blog post we wrote, describing how to build a Raspberry Pi robot that you can drive around using a tablet, smartphone or PC. A Raspberry Pi with a camera, gives you a small, low cost, embedded vision system, but it’s not very mobile.

An Introduction to Gradient Descent and Linear Regression Gradient descent is one of those “greatest hits” algorithms that can offer a new perspective for solving problems. Unfortunately, it’s rarely taught in undergraduate computer science programs. In this post I’ll give an introduction to the gradient descent algorithm, and walk through an example that demonstrates how gradient descent can be used to solve machine learning problems such as linear regression. At a theoretical level, gradient descent is an algorithm that minimizes functions. It’s sometimes difficult to see how this mathematical explanation translates into a practical setting, so it’s helpful to look at an example. Code for this example can be found here Linear Regression Example Simply stated, the goal of linear regression is to fit a line to a set of points. Let’s suppose we want to model the above set of points with a line. Formally, this error function looks like: Each point in this two-dimensional space represents a line. Example Code

HTML Tutorial Why Agile Development Fails (Sometimes) “Agile consultants ruined the software group I work in. Making good software is hard, and anyone claiming to have a magical process that guarantees good software is selling snake oil. I can appreciate your wanting to make a buck, but would also seriously appreciate it if you could find some other industry besides software development to go screw up.” – Anonymous Agile Victim I want to start this post by making one thing perfectly clear: Agile development and testing practices have worked wonders for thousands of organizations. Instead, I wanted to take a deeper look at all the times when Agile fails. “This system is bloated with meetings, excel spreadsheets and anemic of any real documentation. Ouch. Old Habits Die Hard Based on my observations and those of several noted experts, Agile seems to “fail” whenever it’s forced on a team or organization that is accustomed to other methods. “While many people assume that Agile is faster, better, and cheaper, actual results vary greatly.

The Parent's Guide To Installing Minecraft Mods • MineMum Are your kids desperate to get into mods but you don't know where to start? Well this is the guide for you. Installing mods can be tricky and frustrating, but hopefully this will make it a little easier to understand. Important safety tips! Before you get started, make sure you understand what mods are and you've read the safety tips for downloading them. And most importantly of all, make a backup copy of any worlds that you already have that you want to keep. How do you install a mod? There's really no standard way to install a Minecraft mod because each is created by a different person using different methods. The easiest way to do all this is by using a mod called Minecraft Forge, but sometimes for whatever reason Forge doesn't load properly or the mods you want to run aren't compatible with it. OPTION A: Installing mods with Forge Mods can often be really difficult to get up and running. Step 1: Download Forge Step 2: Install Forge Step 3: Launch Minecraft Step 4: Download compatible mods

Machine Learning at Quora - Engineering at Quora - Quora Adapted from my original answer to How does Quora use machine learning in 2015? At Quora we have been using machine learning approaches for some time. We are constantly coming up with new approaches and making big improvements to the existing ones. It is important to note that all these improvements are first optimized and tested offline by using many different kinds of offline metrics but are always finally tested online through A/B tests. In the following paragraphs, I will describe some of the most important applications and techniques of ML at Quora as of 2015. Ranking Ranking is arguably one of the most important applications of machine learning on the Web. One interesting example is answer ranking. There are many different features that could go into determining the right order of the answers to a question. We have many other applications of ranking at Quora, some of which might even go unnoticed. Search algorithms Personalized Ranking Recommendations Related Questions Duplicates Models

JUnit - About PM Declaration of Interdependence The PM Declaration of interdependence is a set of six management principles initially intended for project managers of Agile Software Development projects. Later on, the name was changed to "The declaration of interdependence for modern management", as it was realized that the principles might be applicable to other management situations. Origins[edit] The principles[edit] "We ... References[edit] The evolution of the book - Julie Dreyfuss Prior to the release of the Amazon Kindle in November 2007, Stephen Levy commented in his Newsweek article, “Amazon: Reinventing the Book,” on the concept of the book as an invention. Quoting Amazon CEO Jeff Bezos directly, Levy writes that “‘books are the last bastion of analog.” This phrasing suggests the book as a set of definable qualities that can be manipulated, redefined, and commodified. But Levy also issues a warning that eventually “the surge of technology will engulf all media.” In an ever-increasing mass market of iPads, computers, and eBooks, 21st-century technology will redefine the codex of literature and the reading experience in the same way that the codex once revolutionized reading by moving away from the scroll. Watch this comic video, which comments on this anxiety. The idea of a book as a physical object may prove obsolete. If you have an interest in the history of the book and the study of the object itself, then methodology may help to guide your investigation.