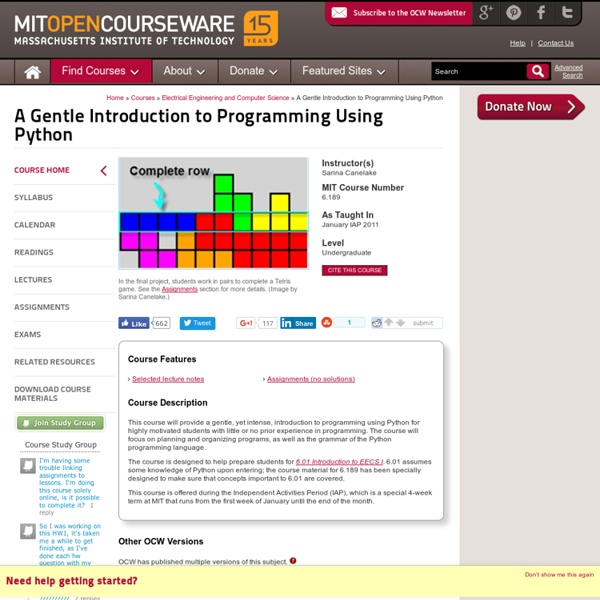 Course Features Course Description This course will provide a gentle, yet intense, introduction to programming using Python for highly motivated students with little or no prior experience in programming. The course will focus on planning and organizing programs, as well as the grammar of the Python programming language. The course is designed to help prepare students for 6.01 Introduction to EECS I. 6.01 assumes some knowledge of Python upon entering; the course material for 6.189 has been specially designed to make sure that concepts important to 6.01 are covered. This course is offered during the Independent Activities Period (IAP), which is a special 4-week term at MIT that runs from the first week of January until the end of the month.

How to Teach Coding in the Classroom: Resources for Teachers You’ve probably heard the buzz about coding in the classroom, and you may even have thought about integrating it into your classroom, but just where do you begin? In this post I will run through a few of the most popular online services that are designed to help you and your students get up and coding in no time at all. 1. Python Tutorial The Python tutorial is constructed to teach you the fundamentals of the Python programming language. Eventually, the Python Tutorial will explain how to construct web applications, but currently, you will learn the basics of Python offline. Python can work on the Server Side (on the server hosting the website) or on your computer. However, Python is not strictly a web programming language. That is to say, a lot of Python programs are never intended to be used online. In this Python tutorial, we will just cover the fundamentals of Python and not the distinction of the two.

Hacking the Random Walk Hypothesis StuartReid | On September 15, 2015 Hackers would make great traders. At a meta level, hackers and traders do the same thing: they find and exploit the weaknesses of a system. The difference is that hackers hack computers, networks, and even people for various good and bad reasons whereas traders hack financial markets to make profits. One type of exploit which has always fascinated me are those on random number generators. You see, random number generators are used everyday to encrypt data and communications but if the random number generators are flawed then they stop being cryptographically secure and hackers can exploit those vulnerabilities to decrypt the encrypted data and communications.

Non-Programmer's Tutorial for Python 3/Print version All example Python source code in this tutorial is granted to the public domain. Therefore you may modify it and relicense it under any license you please. Since you are expected to learn programming, the Creative Commons Attribution-ShareAlike license would require you to keep all programs that are derived from the source code in this tutorial under that license. 20 Best Free Tutorials to Learn Python: Find the Killer Python Tutorial PDF, eBook or Online Python is one of the most elegant and complete programming language and comes packed with tons of features to develop web applications as well as applications that run on your computer. Python is high level language, simple to learn and comes with multiplatform support. The depth of Python makes it specifically useful in education and research sector and that is one reason for Python’s popularity among students. There is no dearth of Python tutorials out there in the wild that train you on fundamentals of coding in Python, but finding the right set of tutorials is crucial to master the concepts fast with lesser effort. One can learn Python basic concepts within an hour by following a good Python tutorial or spend hours struggling with a low quality learning material. In an attempt to make it easier for everyone to find the right Python tutorials, I have listed down various Python tutorials and learning resources, each labelled by complexity and delivery media.

Stop Making Sprites (Compass, Sass, and PNG Sprite Generation) Update 01/11/12: new code at the bottom of this post. Sass has been kicking around for a while, but I hadn’t given it a try until just recently. Sass usually goes hand-in-hand with Rails, Compass makes it so easy to run Sass on standalone projects that I’ve started using it on nearly everything. The result is faster, DRYer, more enjoyable coding. The biggest benefit for me has been Compass’s sprite generation, which — if done right — can cut down your coding time and filesize. Sprites are an optimization best practice, but they’re no fun to work with.

Teaching with Python by John M. Zelle, Ph.D. I have written an introductory CS textbook using Python. Certified Python Professional Vskills certification for Python Developers assesses the candidate for developing Python based applications. The certification tests the candidates on various areas in developing Python based software which includes knowledge of installation, usage, syntax and semantics of Python programming language. Knowledge of OO (Object Oriented) programming principles is pre-requisite for certification. Why should one take this certification? This certification is intended for professionals and graduates wanting to excel in their chosen areas.

Teach Coding in the Classroom: Resources from ISTE '14 I was super excited to attend Hack Education (originally called “EdubloggerCon”), an all-day unconference held the Friday before the formal start of ISTE 2014. This interactive day of learning, now in its eighth year, was touted to me as the event to attend in Atlanta, and it did not disappoint. The informal, small-group conversations were inclusive and welcoming. 10 Engaging Python projects 10 Engaging Python Projects is a series of worksheets I have produced to introduce Key Stage 2 and 3 students to the world of the Raspberry Pi and programming in Python. I started creating some worksheets for my own school Pi club and then thought - why not make it into a free iBook. The iBook is free and will also be available as a PDF if requested by schools. The projects are available in an iBook format for Mac and iPad from the Apple iBook Store here The projects are based around the Traffic Light Kit available from CPC for £4.79 including VAT and can be bought here

Python tutorial This is Python tutorial. In this tutorial, you will learn the basics and more advanced topics of the Python language. Table of contents Python View Materials These short, hour-long activities allow you to try out CS First and introduce your students to computer science without committing to a complete 8-activity theme. They're perfect for special events such as Hour of Code or CSEdWeek, or as practice to help you familiarize yourself with CS First before starting a normal theme. High Seas Activity Sample CS First with "High Seas," an introductory activity designed for use in a classroom setting or at a conference, hackathon, or other event like Hour of Code. "High Seas" is a one-time, standalone activity and not part of a regular CS First theme, so it does not use or provide printed materials.