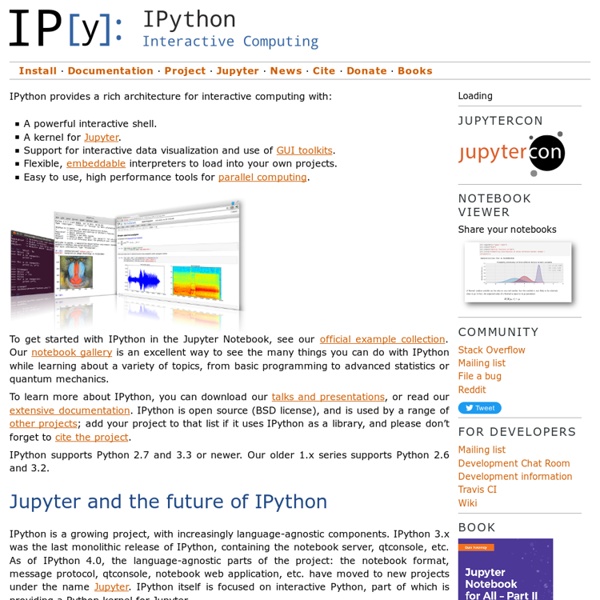 IPython provides a rich architecture for interactive computing with: Powerful interactive shells (terminal and Qt-based).A browser-based notebook with support for code, text, mathematical expressions, inline plots and other rich media.Support for interactive data visualization and use of GUI toolkits.Flexible, embeddable interpreters to load into your own projects.Easy to use, high performance tools for parallel computing. While the focus of the project is Python, our architecture is designed in a language-agnostic way to facilitate interactive computing in any language. An interactive kernel speaks to clients such as the terminal or web notebook via a well-specified protocol, and all features of a kernel are available to all clients. We ship the official IPython kernel, but kernels for other languages such as Julia and Haskell are actively developed and used.

The Tkinter Canvas Widget The Canvas widget provides structured graphics facilities for Tkinter. This is a highly versatile widget which can be used to draw graphs and plots, create graphics editors, and implement various kinds of custom widgets. When to use the Canvas Widget The canvas is a general purpose widget, which is typically used to display and edit graphs and other drawings. Another common use for this widget is to implement various kinds of custom widgets. Programmer automates his job There's a hilarious project that's popular on GitHub, the website that hosts all kinds of software that programmers want to share with each other. The project was shared by a programmer named Nihad Abbasov, known as "Narkoz" on GitHub. It consists of a bunch of software scripts with some funny but NSFW names. Narkoz says that the scripts came from a another programmer. He tells the story like this: there was a programmer who left for another company, the type of guy that "if something — anything — requires more than 90 seconds of his time, he writes a script to automate that."

Books — IPython Install · Docs · Videos · News · Cite · Sponsors · Donate Versions Stable » Python Web Frameworks: Are Template Languages Worth using, or is Python enough? - DevChix - Blog Archive Last year I was tasked with the job of evaluating web frameworks and template languages, picking a set of tools, and using them to rewrite chunks of our web framework, one chunk at a time. It was a fun project (thanks be to Bill). I had months to try out various frameworks, content servers and template languages before we committed to anything and moved forward. University of Washington fusion reactor promises "cheaper than coal" energy In the 21st century, the world lives with two futures ahead of it – one of looming energy shortages, and another of godlike energy abundance. The key to this whether it’s possible to turn fusion reactor technology from a laboratory exercise into a real-world application. Engineers that the University of Washington (UW) are working on a fusion reactor that, when scaled up, could produce energy on a practical scale, yet at a cost rivaling that of a conventional coal-powered plant. Nuclear fusion, as the name implies, is based on fusing hydrogen atoms to form helium; a process that releases tremendous amounts of energy.

The 2015 Opensource.com Reading List A decade of good books It's 2004. Google files its IPO. IPython Books - IPython Cookbook IPython Interactive Computing and Visualization Cookbook This advanced-level book covers a wide range of methods for data science with Python: Interactive computing in the IPython notebook High-performance computing with Python Statistics, machine learning, data mining Signal processing and mathematical modeling Highlights 500+ pages100+ recipes15 chaptersEach recipe illustrates one method on one real-world exampleCode for Python 3 (but works fine on Python 2.7)All of the code freely available on GitHubContribute with issues and pull requests on GitHub This is an advanced-level book: basic knowledge of IPython, NumPy, pandas, matplotlib is required.