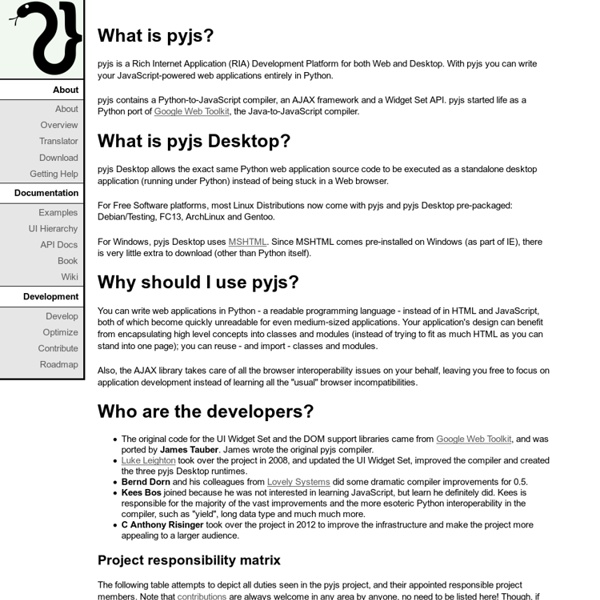 Skulpt Pyjeon Software Pyjamas 0.8.1 Pyjamas Widget API for Web applications, in Python Current Release: 0.8.1~+alpha1--------------- This is the 0.8.1~+alpha1 release of Pyjamas. Features and enhancements of the stand-alone 0.8 series javascriptcompiler and associated modules include: * more behaviour closer to python, thanks to several contributions including from Daniel Kluev * improvements and additions to the standard modules, including renaming JSONParser to json and changing its interface to match standard python, and a new python-compliant logging module. In the User-Interface suite, which is separate from the Pyjamasstand-alone python-to-javascript compiler, the features andenhancements include: * a new platform override system that puts source files for both browsers and desktop pyjamas applications in the same directory as the module being overridden * Gradient and Text functions for the 2D Canvas module * Fix to long-standing issue with Focus.py Pyjamas------- For more information, see: Pyjamas-Desktop---------------

No, Seriously, Why Should I Learn to Code? | The “Invent with Python” Blog The geeks have inherited the earth. A couple decades ago if you talked with friends in a chat room, you were cast as a socially-awkward nerd. Doing the same today just means you're a typical Facebook user. Broadband Internet connections and smartphones have taken the Information Age that technically started in the 1970s with PCs and pushed it into daily mainstream life. Along with this culture change is a social anxiety: Should I learn to code? Like with all panics, entrepreneurs and pundits (including myself) come out of the woodwork to offer their opinions or push their products. Don't get me wrong: You should learn to program. Here are bogus reason you should learn to code that you'll find in most everyone-should-learn-to-code rhetoric: To become a software engineer and make six-figures. Before I go into the real reasons you, your friends, your neighbors, your cat, and everyone should indeed learn to code, consider this anecdote: "But," the teacher continued, "let me ask you this.

Automate the Boring Stuff with Python | Practical Programming for Total Beginners Ruby vs Python: Choosing Your First Programming Language: Course Report (updated August 2016) So you've decided to switch careers and jump into tech. Congrats! Now, you're probably wondering which programming language you should learn first! Join Course Report and Bloc as we tackle all of your questions about two of the most popular languages taught at coding bootcamps: Ruby vs Python. With Bloc mentor Ben Neely, we learn which language is best for beginners, which will help you land your first developer job, and what makes Ruby and Python unique. A quick intro to Ruby and Python: history, rise in popularity & syntax. Follow along with the presentation deck below (transcript coming soon!) Everyone who watches this video is probably in different stages of a career change. Helping us today is Ben Neely, who is a curriculum developer at Bloc, which is an online coding bootcamp. Remember: Course Report has an exclusive $100 scholarship with Bloc, live right now! About Ben Neely - 3:18 Ben, why don’t you introduce yourself? Glossary of Tech Terms - 5:30 Language: ex.