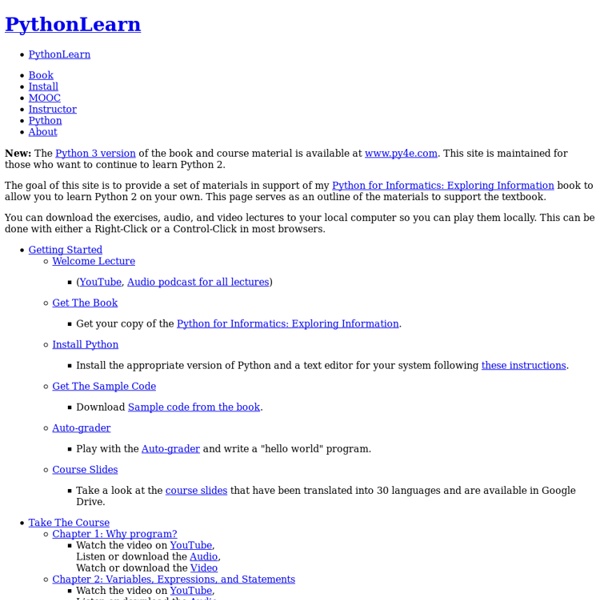 The goal of this site is to provide a set of materials in support of my Python for Informatics: Exploring Information book to allow you to learn Python on your own. This page serves as an outline of the materials to support the textbook. You can download the exercises, audio, and video lectures to your local computer so you can play them locally. This can be done with either a Right-Click or a Control-Click in most browsers. Welcome Lecture - (YouTube, Download MP4, Audio podcast for all lectures) Get your copy of the Python for Informatics: Exploring Information. Install the appropriate version of Python and a text editor for your system following these instructions.

Hackasaurus Look ahead Learn all about Firefox OS » Welcome to Webmaker! That username is taken You must choose a username Invalid username. All usernames must be between 1-20 characters, and only include "-", "_" and alphanumeric characters Benefits of this Interactive Textbook — How to Think like a Computer Scientist: Interactive Edition This interactive book is a product of the Runestone Interactive Project at Luther College, led by Brad Miller and David Ranum. There have been many contributors to the project. Our thanks especially to the following: This book is based on the Original work by: Jeffrey Elkner, Allen B. Downey, and Chris MeyersActivecode based on SkulptCodelens based on Online Python TutorMany contributions from the CSLearning4U research group at Georgia Tech.ACM-SIGCSE for the special projects grant that funded our student Isaac Dontje Lindell for the summer of 2013.NSF

Python Tutorial The Python tutorial explains how to program using Python. The Python tutorial is constructed to teach you the fundamentals of the Python programming language. Eventually, the Python Tutorial will explain how to construct web applications, but currently, you will learn the basics of Python offline. Python can work on the Server Side (on the server hosting the website) or on your computer. However, Python is not strictly a web programming language.

Google Developers Welcome to Google's Python Class -- this is a free class for people with a little bit of programming experience who want to learn Python. The class includes written materials, lecture videos, and lots of code exercises to practice Python coding. These materials are used within Google to introduce Python to people who have just a little programming experience. The first exercises work on basic Python concepts like strings and lists, building up to the later exercises which are full programs dealing with text files, processes, and http connections. The class is geared for people who have a little bit of programming experience in some language, enough to know what a "variable" or "if statement" is. Beyond that, you do not need to be an expert programmer to use this material.

untitled Python is an interpreted language, this means that your computer does not run Python code natively, but instead we run our code using the Python interpreter. There are two ways in which you can run Python code: Directly typing commands into the interpreterGood for experimenting with the language, and for some interactive workTyping code into a file and then telling the interpreter to run the code from this fileGood for larger programs, and when you want to run the same code repeatedly While we are initially exploring the language we will use the interpreter interactively. How you start the interpreter will depend on which operating system you are using, but on a Mac or Linux machine you should start a terminal and then just type the command python. This will print out some information about your installation of python and then leave you with a command prompt which looks like ">>>".

Popular Python recipes Welcome, guest | Sign In | My Account | Store | Cart ActiveState Code » Recipes Languages Tags Authors Sets Python Examples On these pages, I have collected a bit of information about the Python programming language, along with a bunch of examples. These might be useful if you want to see some of the features without actually learning the language itself. You don't have to read through all of this in order. Just pick the pages which look most interesting to you.

Code Like a Pythonista: Idiomatic Python In this interactive tutorial, we'll cover many essential Python idioms and techniques in depth, adding immediately useful tools to your belt. There are 3 versions of this presentation: ©2006-2008, licensed under a Creative Commons Attribution/Share-Alike (BY-SA) license. Solving Every Sudoku Puzzle by Peter Norvig In this essay I tackle the problem of solving every Sudoku puzzle. It turns out to be quite easy (about one page of code for the main idea and two pages for embellishments) using two ideas: constraint propagation and search. Sudoku Notation and Preliminary Notions First we have to agree on some notation. The Python Tutorial Python is an easy to learn, powerful programming language. It has efficient high-level data structures and a simple but effective approach to object-oriented programming. Python’s elegant syntax and dynamic typing, together with its interpreted nature, make it an ideal language for scripting and rapid application development in many areas on most platforms. The Python interpreter and the extensive standard library are freely available in source or binary form for all major platforms from the Python Web site, and may be freely distributed. The same site also contains distributions of and pointers to many free third party Python modules, programs and tools, and additional documentation. The Python interpreter is easily extended with new functions and data types implemented in C or C++ (or other languages callable from C).