The world's most difficult books: how many have you read? 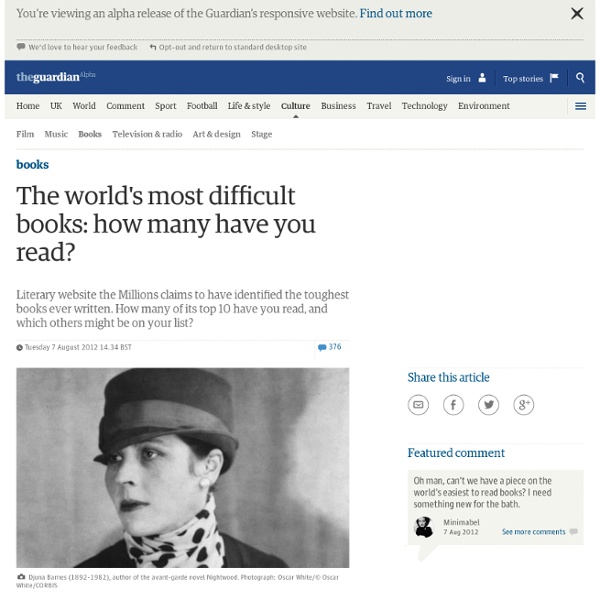 'Fantastically convoluted' … Nightwood by Djuna Barnes. Photograph: Oscar White/Corbis Two and a half. I have read two and a half of the 10 most difficult books ever written, as selected by Emily Colette Wilkinson and Garth Risk Hallberg of the Millions after three years' research. The pair started their quest to identify the toughest books out there back in 2009, looking for "books that are hard to read for their length, or their syntax and style, or their structural and generic strangeness, or their odd experimental techniques, or their abstraction". Anyway, they've now picked the most difficult of the most difficult – the 10 "literary Mount Everests waiting out there for you to climb, should you be so bold" – and have laid them out for discussion at Publishers Weekly. The titles? There are a few other books I might include in the list – Thomas Pynchon's Gravity's Rainbow, David Foster Wallace's Infinite Jest, and if I was going to choose Woolf, I'd go for The Waves. How about you? Related:  eBooks • Read, Write, Reflect

Unusual, Neglected and/or Lost Literature [ home ] Major update during Aug.-Oct. 2014. Major update during Nov. 2008 including reformatting (e.g. what was I thinking using all those HTML lists?) Contained herein are links and books in my personal collection (well, a few aren't...yet) in the general category of unusual literature, for which the best definition I can come up with at the moment is: stuff I like that's a little or a lot different than most of the stuff you'll find down at the local Books'R'Us. I guess the ultimate goal is to provide somewhere for myself and others of my particular bent (and I use that word very deliberately) to go to find something to read during those times when the usual fodder just isn't satisfying the need, as well as to provide a web presence for the writings of obscure/unusual authors who deserve wider recognition. Suggestions and commentary are more than welcome and will be fully credited unless otherwise desired. Enjoy. Meta, i.e. Books About BooksRich, creamery metabookage. Meta-Books Authors

Why Readers, Scientifically, Are The Best People To Fall In Love With Ever finished a book? I mean, truly finished one? Cover to cover. Closed the spine with that slow awakening that comes with reentering consciousness? You take a breath, deep from the bottom of your lungs and sit there. Book in both hands, your head staring down at the cover, back page or wall in front of you. You’re grateful, thoughtful, pensive. Like falling in love with a stranger you will never see again, you ache with the yearning and sadness of an ended affair, but at the same time, feel satisfied. This type of reading, according to TIME magazine’s Annie Murphy Paul, is called “deep reading,” a practice that is soon to be extinct now that people are skimming more and reading less. Readers, like voicemail leavers and card writers, are now a dying breed, their numbers decreasing with every GIF list and online tabloid. They can entertain other ideas, without rejecting them and still retain their own. Did you ever see your ex with a book? It’s no surprise that readers are better people.

One Sentence - True stories, told in one sentence. Virtual Domicile of Steven K. Baum Umberto Eco’s Antilibrary: Why Unread Books Are More Valuable to Our Lives than Read Ones by Maria Popova How to become an “antischolar” in a culture that treats knowledge as “an ornament that allows us to rise in the pecking order.” “It is our knowledge — the things we are sure of — that makes the world go wrong and keeps us from seeing and learning,” Lincoln Steffens wrote in his beautiful 1925 essay. And yet the contour of what we know is a mere silhouette cast by the infinite light of the unknown against the screen of the knowable. That’s what Lebanese-American scholar, statistician, and essayist Nassim Nicholas Taleb explores in a section of his modern classic The Black Swan: The Impact of the Highly Improbable (public library) — an illuminating inquiry into the unknowable and unpredictable outlier-events that precipitate profound change, and our tendency to manufacture facile post-factum explanations for them based on our limited knowledge. The writer Umberto Eco belongs to that small class of scholars who are encyclopedic, insightful, and nondull. HT Bobulate

The Dictionary of Obscure Sorrows The Greatest Books of All Time, As Voted by 125 Famous Authors “Reading is the nourishment that lets you do interesting work,” Jennifer Egan once said. This intersection of reading and writing is both a necessary bi-directional life skill for us mere mortals and a secret of iconic writers’ success, as bespoken by their personal libraries. The Top Ten: Writers Pick Their Favorite Books asks 125 of modernity’s greatest British and American writers — including Norman Mailer, Ann Patchett, Jonathan Franzen, Claire Messud, and Joyce Carol Oates — “to provide a list, ranked, in order, of what [they] consider the ten greatest works of fiction of all time– novels, story collections, plays, or poems.” Of the 544 separate titles selected, each is assigned a reverse-order point value based on the number position at which it appears on any list — so, a book that tops a list at number one receives 10 points, and a book that graces the bottom, at number ten, receives 1 point. In introducing the lists, David Orr offers a litmus test for greatness:

Josiah Bounderby in Hard Times Bounderby is a successful capitalist who owns a factory and a bank in Coketown. He brags about having grown up an orphan, and marries Louisa Gradgrind hoping to make her a trophy wife. In the end, she leaves him, his stories about his childhood turn out to be lies, and he dies of a fit in the street. The novel doesn't really beat around the bush with this one. Bounderby is awful. He is loud, obnoxious, completely self-centered, and the novel's most snobby and status-obsessed character. And yet, Bounderby is actually just one giant contradiction. Yes, it turns out that Bounderby actually grew up in a normal, loving, probably over-indulgent family that helped him get a start in life. Josiah Bounderby Timeline Neuroscientist Sam Harris Selects 12 Books Everyone Should Read By Maria Popova On an excellent recent episode of The Tim Ferriss Show — one of these nine podcasts for a fuller life — neuroscientist Sam Harris answered a listener’s question inquiring what books everyone should read. As a lover of notable reading lists and an ardent admirer of Harris’s mind and work, I was thrilled to hear his recommendations — but as each one rolled by, it brought with it an ebbing anticipatory anxiety that he too might fall prey to male intellectuals’ tendency to extoll almost exclusively the work of other male intellectuals. (Look no further than Neil deGrasse Tyson’s reading list for evidence.) And indeed Harris did — the books he recommended on the show, however outstanding, were all by men. Complement with the reading lists of Joan Didion, Susan Sontag, Carl Sagan, and Alan Turing, then revisit Harris on the paradox of meditation and subscribe to The Tim Ferriss Show here. Top illustration by Marc Johns