How to build a fictional world - Kate Messner 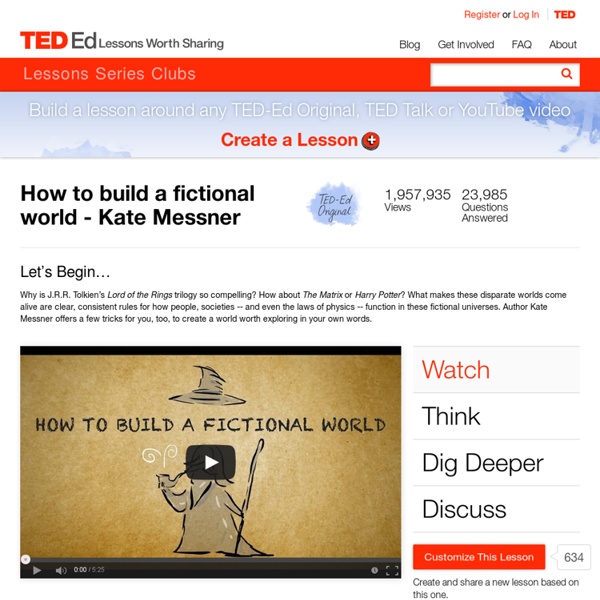 The world building strategies of popular books like Lord of the Rings and Harry Potter have been analyzed in great detail by writers and critics alike. The NPR piece “At Home in Fantasy’s Nerd-Built World” continues the conversation, taking a look at the magical creation of George R. R. Martin’s world in Game of Thrones. If you’re ready to create your very own fictional world, it’s great to start by reading lots of examples – and read like a writer, studying the craft of world building. Pay attention to the details and ask yourself why the author might have made the choices he or she did. When you’re ready to move forward, you may want to use author Kate Messner’s world building worksheet as a guide. Author/educator Kate Messner’s science thrillers Eye of the Storm and Wake Up Missing may serve as additional mentor texts for writers who want to build their own futuristic worlds.

45 ways to avoid using the word 'very' Writers Write is your one-stop resource for writers. Use these 45 ways to avoid using the word ‘very’ to improve your writing. Good writers avoid peppering their writing with qualifiers like ‘very’ and ‘really’. They are known as padding or filler words and generally add little to your writing. According to Collins Dictionary: ‘Padding is unnecessary words or information used to make a piece of writing or a speech longer. Synonyms include: waffle, hot air, verbiage, wordiness.’

These Scientists Studied Why Internet Stories Go Viral. You Won't Believe What They Found A few weeks ago, the Wall Street Journal profiled Gawker editor Neetzan Zimmerman, whose job is to post content that's poised to go viral. Zimmerman does his job quite well. His posts generate about 30 million pageviews a month--tops at the site by far, six times what the second-leading staffer generates. Nerd Paradise - How to Write A Research Paper Posted on: 10 Cado 7:0 - 5.27.29 So you've procrastinated again. You told yourself you wouldn't do this 2 months ago when your professor assigned you this. Write Better: 3 Ways To Introduce Your Main CharacterWritersDigest.com One of the biggest bugaboos in manuscript submissions is when the author doesn’t properly introduce the protagonist within the first chapter. Readers want to know quickly the protagonist’s sex, age and level of sophistication in the world of the story, and they want to relate to the character on an emotional level. Readers’ interest in the protagonist has to be earned, in other words. If we like a character, then we want to see her do well and we’re willing to follow her around and invest our time and interest in rooting her on in her struggle. But it’s important we know some essentials about the character so we can get to like her.

20 Common Grammar Mistakes I’ve edited a monthly magazine for more than six years, and it’s a job that’s come with more frustration than reward. If there’s one thing I am grateful for — and it sure isn’t the pay — it’s that my work has allowed endless time to hone my craft to Louis Skolnick levels of grammar geekery. As someone who slings red ink for a living, let me tell you: grammar is an ultra-micro component in the larger picture; it lies somewhere in the final steps of the editing trail; and as such it’s an overrated quasi-irrelevancy in the creative process, perpetuated into importance primarily by bitter nerds who accumulate tweed jackets and crippling inferiority complexes. But experience has also taught me that readers, for better or worse, will approach your work with a jaundiced eye and an itch to judge. While your grammar shouldn’t be a reflection of your creative powers or writing abilities, let’s face it — it usually is.

Dream Dictionary The significance of dreams has probably been debated since people first developed the ability to communicate. Despite this, there's still no agreement on why we dream. It's hard to believe that dreams have no meaning at all, though, especially when it's so much fun to try to figure out what they're trying to tell us. To help you interpret your dreams, we've developed a dictionary you can use to look up some of the images and feelings commonly found in these night time visions. Another good thing to try when interpreting dreams is just to trust your instincts!

How to mount Google Drive on Linux As I speak, more than 22,000 people signed up for a petition, desperately wanting to have an official native Linux client for Google Drive, and yet their voice is still being ignored by Google. Perhaps when it comes to boosting their bottom line, Linux desktop market is not a priority for Google. They can ignore Linux desktop market all they want, but they cannot ignore the power of FOSS. Faced with the frustration, the open-source community responded, producing unofficial Google Drive clients such as Grive or SyncDrive.

20 Obsolete English Words Photo: Katherine Hodgson If we all start using them, these words can be resurrected. DURING MY UNDERGRADUATE studies as a Linguistics major, one of the things that struck me most is the amazing fluidity of language. 10,000-Year Calendar! Get out the nice paper for these photo calendars! Monthly and yearly calendars available! 100's of artworks and photos available! Print a monthly or a yearly calendar using your own photo for any month or year. Free demo or only $1 if you like your printed calendar.

Sites - Improve Your Writing Skills Advertisement Today, too many websites are still inaccessible. In our new book Inclusive Design Patterns, we explore how to craft flexible front-end design patterns and make future-proof and accessible interfaces without extra effort. Hardcover, 312 pages. Get the book now! Effective writing skills are to a writer what petrol is to a car. Cheat Sheets For Writing Body Language Translate emotions into written body language We are always told to use body language in our writing. Sometimes, it's easier said than written. I decided to create these cheat sheets to help you show a character's state of mind. Obviously, a character may exhibit a number of these behaviours.

Installation guide — Scrapy 0.18.2 documentation Installing Scrapy¶ Scrapy runs on Python 2.7 and Python 3.3 or above (except on Windows where Python 3 is not supported yet). If you’re already familiar with installation of Python packages, you can install Scrapy and its dependencies from PyPI with: