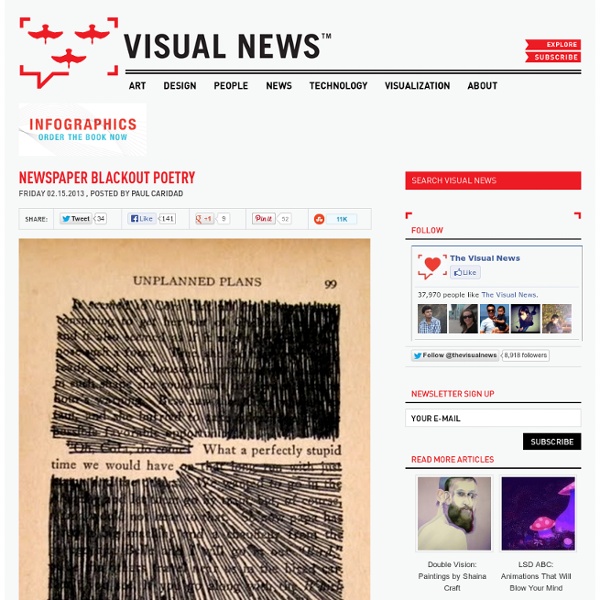 Sometimes in life you can only grasp the true beauty of things when you read between the lines. That is exactly what Austin Kleon has been doing to old newspapers. Using a black marker, he takes away the words he doesn’t need, creating new poetic verses. He has compiled his poetry into a book called Newspaper Blackout and invites others to upload their own blackout poetry on his Tumblr page. It’s like a new twist on magnetic poetry that will leave you unable to look at a newspaper in the same way again! Check out some of the amazing poetry in the archives of newspaperblackout.com. See Also WORD ANIMALS: CREATURES MADE OF TYPOGRAPHY Above image by leahmackin and below image by Austin Kleon Image by Austin Kleon @fleurterhorst Noah Lewis missxx salix lucida

HUMOR:Pronunciation Poem I take it you already know of tough and bough and cough and dough? Others may stumble, but not you, on hiccough, thorough, laugh and through. Well done! Watch A Student Totally Nail Something About Women That I've Been Trying To Articulate For 37 Years Lily Myers: Across from me at the kitchen table, my mother smiles over red wine that she drinks out of a measuring glass. She says she doesn't deprive herself, but I've learned to find nuance in every movement of her fork. In every crinkle in her brow as she offers me the uneaten pieces on her plate. Birthstones By Month Infographic, Birth Gem Stones Over the past two decades, Brilliance has built a reputation as one of the leading retailers of diamonds, engagement rings, and fine jewelry. Each of our diamonds is hand-picked by gemologists and our jewelry is manufactured in the United States by master jewelers. As you shop for the perfect jewelry item, we'll guide you through the process with clear, honest advice, ensuring that your choice reflects your personal style and preferences.

The Awakening A time comes in your life when you finally get…when, in the midst of all your fears and insanity, you stop dead in your tracks and somewhere the voice inside your head cries out…ENOUGH1 Enough fighting and crying and blaming and struggling to hold on. Then, like a child quieting down after a tantrum, you blink back your tears and begin to look at the world through new eyes. This is your awakening.

5 Writing Exercises That Will Make You More Creative An Example: ... will mean nothing to you here, because it would be a tangential spin-off of a supporting character from a project that you don't know even know that I'm working on. That's like four different ways for you to not give a shit, so let's just fill this space with a man trying to kill the ground with an explosive sledgehammer. 9 Out Of 10 Americans Are Completely Wrong About This Mind-Blowing Fact There's a chart I saw recently that I can't get out of my head. A Harvard business professor and economist asked more than 5,000 Americans how they thought wealth was distributed in the United States. This is what they said they thought it was. Dividing the country into five rough groups of the top, bottom, and middle three 20% groups, they asked people how they thought the wealth in this country was divided. Then he asked them what they thought was the ideal distribution, and 92%, that's at least 9 out of 10 of them, said it should be more like this, in other words more equitable than they think it is. Now that fact is telling, admittedly, the notion that most Americans know that the system is already skewed unfairly.

A to X Writing Advice, Courtesy of Copy Chief Benjamin Dreyer There’s no such word as moreso.Mucus is a noun; mucous is an adjective.Nerve-racking, not -wracking; racked with guilt, not wracked with guilt.One buys a newspaper at a newsstand, not a newstand. An ordinance is a law; ordnance is ammo.Palette has to do with color; palate has to do with taste; a pallet is, among other things, something you sleep on. Eugene Pallette was a character actor; he’s particularly good in the 1943 film Heaven Can Wait.Nounwise, a premier is a diplomat; a premiere is something one attends. 10 Animals You Probably Didn't Know Existed - Knowledge Salad We’ve all heard about the flying squirrel, vampire bats, and naked mole rat, but I bet you haven’t heard of Markhor, Lamprey, and Gerenuk! Here are ten animals that you probably haven’t heard of! (Too lazy to write a good introduction!) Related: 1.