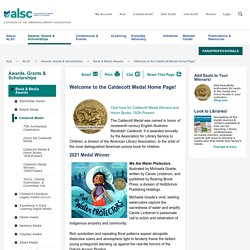 It is awarded annually by the Association for Library Service to Children, a division of the American Library Association, to the artist of the most distinguished American picture book for children. Hello Lighthouse, illustrated and written by Sophie Blackall, published by Little, Brown and Company, a division of Hachette Book Group, Inc. Masterful ink and watercolor illustrations illuminate the story of a lighthouse and the family inside. Stunning images of the lighthouse in all kinds of weather alternate with views of intimate interior detail and circular motifs. Blackall’s skill with composition, line and close attention to detail have created an exquisite book. “Children will delight in immersing themselves in the captivating discoveries each new look at Hello Lighthouse will bring,” said Caldecott Medal Committee Chair Mary Fellows. 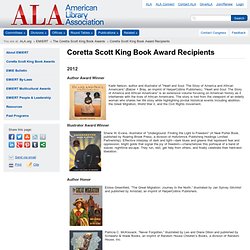 “Heart and Soul: The Story of America and African Americans” is an extensive volume focusing on American history as it intertwines with the lives of African Americans. The story is told from the viewpoint of an elderly woman who shares her life story while highlighting pivotal historical events including abolition, the Great Migration, World War II, and the Civil Rights movement. Illustrator Award Winner Shane W. Author Honor Eloise Greenfield, “The Great Migration: Journey to the North,” illustrated by Jan Spivey Gilchrist and published by Amistad, an imprint of HarperCollins Publishers. Patricia C. Illustrator Honor. Geisel (Dr. Seuss) Award. The Geisel Award is given annually to the author(s) and illustrator(s) of the most distinguished American book for beginning readers published in English in the United States during the preceding year. 2019 Medal Winner Fox the Tiger, written and illustrated by Corey R.

Tabor, and published by Balzer + Bray, an imprint of HarperCollins Publishers Tigers are the best, or so thinks Fox. With a big imagination (and a little bit of paint), he transforms into a growling, prowling tiger. Pencil, watercolor, and crayon illustrations capture the beguiling humor of this entertaining story. “Featuring Tabor’s hip art and quirky, surprising twists, ‘Fox the Tiger’ is an inviting tale of the power of transformation and friendship. 2019 Honor Books The Adventures of Otto: See Pip Flap, written and illustrated by David Milgrim, and published by Simon Spotlight, an imprint of Simon & Schuster Children’s Publishing Division Pip wants to fly! GUYS READ. Newbery Medal. 2010s | 2000s | 1990s | 1980s | 1970s | 1960s | 1950s | 1940s | 1930s | 1920s 2016 Medal Winner: Last Stop on Market Street by Matt de la Peña (G.P. 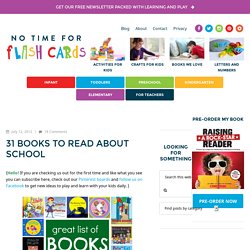 If you are checking us out for the first time and like what you see you can subscribe here, check out our Pinterest boards and follow us on Facebook to get new ideas to play and learn with your kids daily. } School is less than a month away for some of my readers while others still have a while before the alarm clocks get set, lunches get packed and they get on the school bus. These books are all about going to school and are a great way to ease the transition from summer to the school year with young kids. Some are about preschool, some are about that big first day at kindergarten and some are more general.

Many handle the topic of school anxiety and I think those are the great tools for kids that are not eager to separate or are natural worriers. I Don’t Want to Go To School! By Stephanie Blake is a funny little book that deals with the big issue of not wanting to go to school. Maisy Goes to Preschool: A Maisy First Experiences Book First Day Jitters First Year Letters My Preschool.