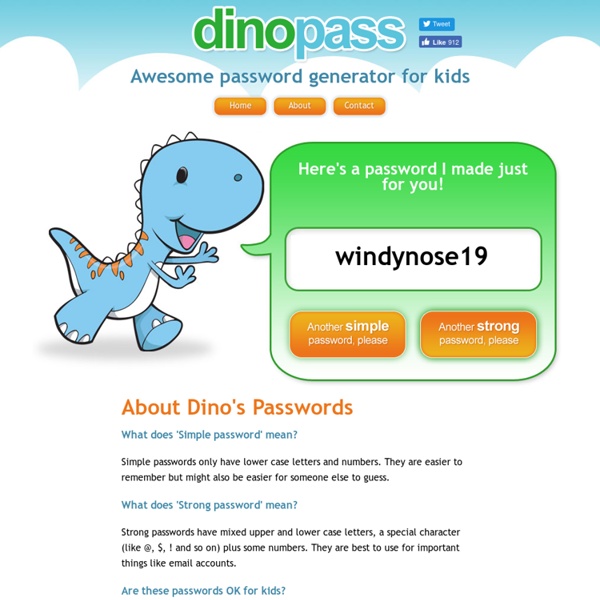 Popplet 7 Password Mistakes That Will Likely Get You Hacked You’ve heard it all before and you’re probably sick of it. Password safety is an oft-drilled topic that easily enters one ear and oozes out the other, but we can’t emphasize this enough: settling for a weak password is like leaving all of your doors unlocked. Just because you’ve never been robbed before doesn’t mean it’s safe to leave your doors unlocked, does it? Maybe one day we’ll move beyond usernames and passwords, but for now, it’s absolutely critical to strengthen your weak passwords. The Worst Passwords of Last Year It isn’t easy to determine the “worst passwords” being used because passwords are (hopefully) kept secret and hidden. 123456password12345678qwerty12345123456789football12341234567baseballwelcome1234567890abc1231111111qaz2wsxdragonmastermonkeyletmeinloginprincessqwertyuiopsolopassw0rdstarwars As you can see, these really are the worst of the worst. So let’s take a look at why these are so terrible and what you can do to make sure your accounts are truly safe and sound.

SlidePlayer - Upload and Share your PowerPoint presentations 6 Tips For Creating An Unbreakable Password That You Can Remember You can lock every door and window of your house, but if you use a skeleton key the odds are pretty good someone is probably going to end up robbing you blind. The same is true of your passwords. If your passwords are not unique and unbreakable, you might as well open the front door and invite the robbers in for lunch. A few years ago, Damien described a few ways to come up with strong passwords, like making sure you use special characters and that the password is at least 8 characters long. Still, creating a complex password is only half the job, the other half is actually remembering it. And, is any password truly unbreakable? This sounds like a simple concept, but even coming up with a sentence that you’ll remember can be as difficult as coming up with a password itself. 1. One preferred method of coming up with complex passwords that pass every IT security policy out there – even those that require 15 character passwords – is the nursery rhyme technique. “7bbcbyhT5itmTcinc!” 2. 3. 4.

Interactive Learning Sites for Education - Home How to Generate Strong Passwords That Match Your Personality A secure password is one of the most important parts of keeping yourself safe while browsing the web. Most people now have so many online accounts that without a strong password they could quickly find themselves on the receiving end of a cyber-crime. The problem is that it’s no longer suitable to merely use your pet’s name with “123” tagged on the end (though at least that’s not as bad as “password”, “baseball”, and “dragon” – all of which were in the top ten most common passwords in 2014). On the flipside, it’s nigh-on impossible to remember a random series of numbers, letters, and special characters, especially for every site that you have an account with. You have to have some kind of system in order to keep your sanity. Perhaps the solution is to use a password generator that creates credentials to match who you are? For Kids: DinoPass Childhood isn’t so innocent anymore; kids have online accounts for almost as many services as adults. DinoPass comes to the rescue. What Have We Missed?

ExploreLearning Gizmos: Math & Science Simulations Powering Inquiry and Understanding CNETs guide to keeping your information private online Much of modern life is now spent online and in the cloud. We share our vacations on Facebook, we text and email instead of making a call, and we order things on Amazon instead of going to a store. Whether you do just one or all of these things, you're giving a lot of information about yourself and what you do over to people you've never met. What happens to that information, and who gets to see it, isn't an easy to question to answer. Browsers, email and authentication Spot a phishing e-mail: Even if you have security software, phishing is a serious threat. Two-factor authentication: What you need to know (FAQ):Twitter's got it. How to delete your Amazon browsing history: Want to remove your embarrassing searches from Amazon? Google Stop Google from tracking your voice: Here's how to listen to and delete recordings on your Google account, and how to stop them from being saved to begin with. Apple Microsoft Backing up

How to print multiple Google Docs at once | Iserotope Here’s a Google Docs tip that has eluded me. It’s pretty neat. Most of the time, there’s no need to print out Google Docs. In fact, one of the best features of Google Docs is that it decreases printing and paper waste. But sometimes, I have to print out my students’ documents. All you have to do is click on the documents you want to print and then download them from Google Docs as a zip file. Here’s the YouTube video (@epsbtips) that explains the tip. I hope you find this tip helpful. Related Google Cloud Print is very confusing, not ready for students Several months ago, Google announced Google Cloud Print. September 11, 2011 In "technology" PrinterShare is a winner for teachers Before Google Docs, the No. 1 thing excuse my students gave me on due dates was, "My printer didn't work." July 7, 2009 3 tips to organize your students' Google Docs Google Docs (now Google Drive) is great.

Should you stalk your child's smartphone? Teens and texting - what do parents need to know? Photo: iStock With smartphones, handhelds and wi-fi hotspots everywhere, keeping an eye over your child's shoulder on the home computer is so last century. Why you might want to Kids these days don't just have the world at their feet, they carry it around in their pockets on their smartphones. A survey found half of teenagers have sexted sexually explicit images of themselves. The best of it, and the worst of it, and that's the scary part. The biggest survey of sexting in Australia by the Australian Institute of Criminology found that one in two out of 1200 teenage girls and boys had sent a sexually explicit image of themselves. In a recent poll of Australian teenagers, nearly half (48 per cent) said they had lied to a parent about what they do online or on an app. In a survey, 58 per cent of teenagers said they hid stuff from their parents on their phones or devices. The academic research is worrying too. Why you probably shouldn't