100 Little Ways You Can Dramatically Improve Your Writing 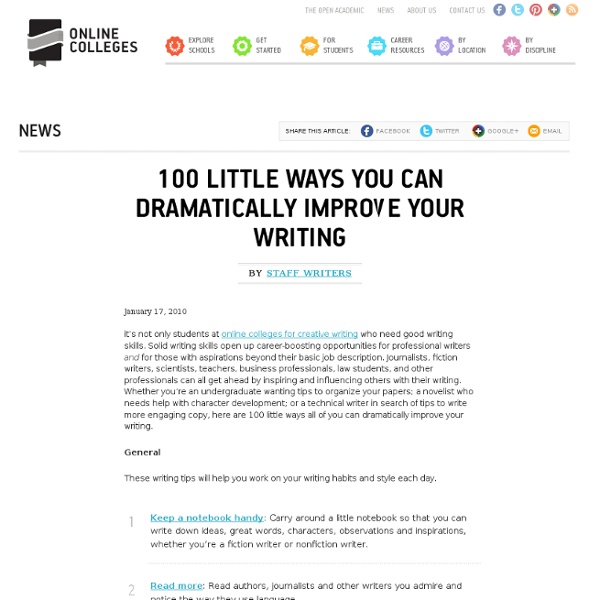 it’s not only students at online colleges for creative writing who need good writing skills. Solid writing skills open up career-boosting opportunities for professional writers and for those with aspirations beyond their basic job description. Journalists, fiction writers, scientists, teachers, business professionals, law students, and other professionals can all get ahead by inspiring and influencing others with their writing. Whether you’re an undergraduate wanting tips to organize your papers; a novelist who needs help with character development; or a technical writer in search of tips to write more engaging copy, here are 100 little ways all of you can dramatically improve your writing. General These writing tips will help you work on your writing habits and style each day. Grammar and Spelling Tighten up your writing by paying careful attention to grammatical nuances, spelling errors and word usage. Creative Writing Business and Technical Writing Journalism Writer’s Block and Inspiration

Setting: Using Scene To Enrich Your Writing In both fiction and nonfiction, the setting is the general background against which your story takes place—the physical location and time period, both of which influence your characters and plot. So how can a creative writer use setting and scenery to further offset, augment, or reflect the action of the plot? Although we’re going to be exploring this issue in terms of fiction, these techniques work for nonfiction as well. These craft techniques work in all genres: poetry, stories, personal essays, memoir, and books. Suppose you’re writing a novel that is set in the Deep South in 1955 and your protagonist is an immigrant facing prejudice and roadblocks at every turn.

The Wicker Man (1973 Edit Storyline Sgt. Howie travels to Summerisle to investigate the disappearance of a young girl. Elements of Suspense in Writing: 6 Secret to Creating and Sustaining Suspense Thriller writing? Mystery writing? Literary fiction? It’s all the same: Building apprehension in the minds of your readers is one of the most effective keys to engaging them early in your novel and keeping them flipping pages late into the night. World-building I’ve been busy worldbuilding this week. It’s one of my favorite things to do in the process of writing sci-fi, and it makes me all giddy and drooly like a kid that’s been dropped into a toybox. Since I revisited my collected materials for the worlds I’m writing in, and have overhauled one of these entirely, I grabbed the opportunity to put together a list of important worldbuilding questions to share with you.

HomeschoolScientist Upload TheHomeschoolScientist.com Subscription preferences 50 Portrait Retouching Tutorials To Take Your Photoshop Skills To A New Level Email Is it something that often happens to you? You just sit and keep on looking through your photos on the computer screen trying to take a closer look at your full-size pictures. And then it occurs to you that they didn’t really suck that much during the actual shoot? Of course, what you see during the shoot with your eyes and what you get after the photo session is not the same thing. Using Pictures as Writing Prompts Choose one of these images to use as a writing prompt for a freewriting session. Ideally, you'll develop one of the ideas generated by your freewriting session into a short story. A reader named Adam C. described how this played out for him in a creative writing class in which each student was given a different photo to write about. Adam writes, "The picture I was given portrayed an elderly couple, holding hands, looking off to the left of the camera lens. There was a large boat in the background.

drawstuffrealeasy Upload ShooRaynerDrawing Channel Subscription preferences Loading... How to Break the Rules of Writing (& More) According to Bestselling YA author Ransom Riggs Like most first conversations and bad first drafts, my (WD’s Managing Editor Adrienne Crezo) interview with Ransom Riggs begins with a discussion about the weather. And not just any weather, either, but peculiar versions of standard precipitation: dust storms, cloudbursts, thundersnow and tornadoes. Of course, Riggs is experiencing none of those phenomena as he sits in the warmth of the never-ending summer of Los Angeles. “I hate to tell you what it’s like here right now,” he says.

Plagiarism Checker Check For Plagiarism To use this plagiarism checker, please copy and paste your content in the box below, and then click on the big green button that says “Check for plagiarism!” then sit back and watch as your article is scanned for duplicated content. Old School Television Upload Subscription preferences Loading... Working... Old School Television Al's Writing Block: Writing: How to Describe a Room I've noticed lately in the stats that people have been actively searching for "how to describe a room." Even though I had done a writing prompt that called for using the description of a room, I never did go over the particulars of describing locations. So for anybody looking for some specific answers, here are my thoughts on describing interior settings, for fiction and prose. First and foremost, you got to ask yourself, what importance is the room or setting to the story or characters? If the room is only there for a brief passing scene, it may just suffice to say "so-and-so went into the broom closet.

100 Useful Web Tools for Writers All kinds of writers, including poets, biographers, journalists, biz tech writers, students, bloggers and technical writers, take a unique approach to their jobs, mixing creativity with sustainability. Whether you’re a freelance writer just scraping by or someone with a solid job and more regular hours, the Internet can provide you with unending support for your practical duties like billing, scheduling appointments, and of course getting paid; as well as for your more creative pursuits, like developing a plot, finding inspiration and playing around with words. Turn to this list for 100 useful Web tools that will help you with your career, your sanity and your creativity whenever your write. Getting Organized Thanks to the Internet, disorganized writers are no longer a cliche.

Physics Community Afire With Rumors of Higgs Boson Discovery | Wired Science One of the biggest debuts in the science world could happen in a matter of weeks: The Higgs boson may finally, really have been discovered. Ever since tantalizing hints of the Higgs turned up in December at the Large Hadron Collider, scientists there have been busily analyzing the results of their energetic particle collisions to further refine their search. “The bottom line though is now clear: There’s something there which looks like a Higgs is supposed to look,” wrote mathematician Peter Woit on his blog, Not Even Wrong. According to Woit, there are rumors of new data that would be the most compelling evidence yet for the long-sought Higgs. The possible news has a number of physics bloggers speculating that LHC scientists will announce the discovery of the Higgs during the International Conference on High Energy Physics, which takes place in Melbourne, Australia, July 4 to 11.