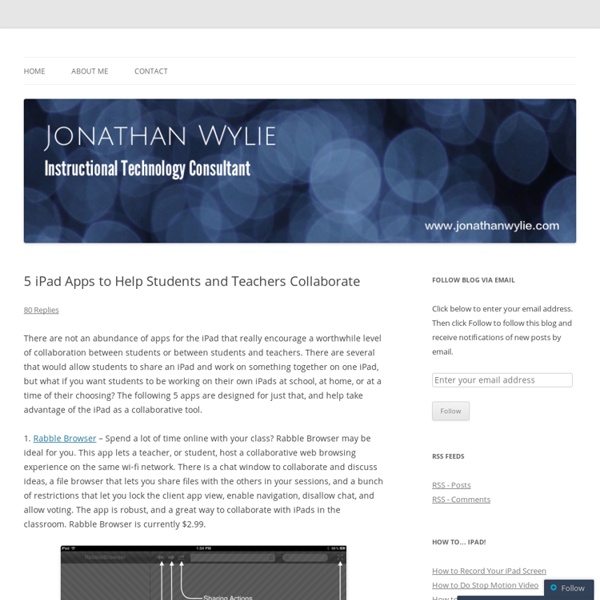 There are not an abundance of apps for the iPad that really encourage a worthwhile level of collaboration between students or between students and teachers. There are several that would allow students to share an iPad and work on something together on one iPad, but what if you want students to be working on their own iPads at school, at home, or at a time of their choosing? The following 5 apps are designed for just that, and help take advantage of the iPad as a collaborative tool. 1. Rabble Browser – Spend a lot of time online with your class? 2. iBrainstorm – In days gone by, sticky yellow notes would litter a desk or whiteboard to record a brainstorming session. 3. 4. 5. Do you have favorite apps for collaborating across iPads? Like this: Like Loading... Related 15 Engaging and Creative Ways to Use iPads in a K-12 Classroom If you are looking for unique and innovative ways to use the iPad in your classroom, then you have come to the right place. In "Apple" In "iPad"

6 Ways Students Can Collaborate With iPads The following post is written by Greg Kulowiec of EdTechTeacher . Join EdTechTeacher at the iPad Summit in Atlanta on April 10-12. The app store is loaded with options that allow students to create content on their iPads. From comic strip creators to mind maps, video editing and publishing, screencasting & digital books, the options for individual student creation are expanding. However, collaboration between students is often a critical component of any classroom activity or project and increasingly there are options available that allow for collaborative efforts across iPads. Below are six ways to support collaboration between student iPads that cover the spectrum of creation options that range from text to digital storytelling to video creation. Explain Everything ($2.99) Currently, .XPL (Explain Everything) files can be exported via Dropbox, Evernote, Box, WebDAV and email and the next update of Explain Everything will support .XPL exports to Google Drive. Google Drive (Free) Diigo

40 Wonderfully Creative iPad Apps We all have the capacity to be creative, it’s in our very nature. The iPad is a wonderful tool for creation is almost every sphere you can imagine, from expressing poetry to capturing artistic ideas, from exploring musical invention to manipulating captured light. Whether you consider yourself a creative professional, or are simply a person who loves to dream and imagine, there are hundreds of awesome iPad apps to help you do just that. Exercise your mind, make something new today! Artistic Apps Procreate Procreate touts itself as possibly the most exciting digital painting app on a mobile device, I think it lives up to that claim. It features a great deal of functionality that’s packaged in an effortlessly intuitive interface, it can’t fail to appeal to the artistic among you! Zen Brush Zen Brush is a beautiful way to get involved and make your own art! Rather than being a fully fledged painting app like Procreate or Brushes, the beauty of Zen Brush lies in the simplicity of the concept. djay

Schools are Switching Textbooks for iPads: Good for Education or Unnecessary Expense? Approximately 600 school districts have transitioned from traditional textbooks to the iPad—and the change may soon be coming to college campuses. Proponents of the iPad in schools claim a range of benefits—from lowered costs to less strain on students’ backs. But is the iPad really a good replacement for a textbook? Here’s a look at the pros and cons. The iPad Advantage They’re more portable The issue with strain on students’ backs isn’t a joke. You don’t have to charge an iPad during the day When comparing the iPad to a laptop, battery life offers a clear advantage for iPad users. Access to a wide range of learning resources Where the iPad really excels is in its role as a device for information consumption. More room in schools With iPads for every student, oinli colleges and universites won’t have to maintain distinct computer labs—freeing up space in many crowded schools. It makes students more computer-literate Drawbacks of iPads in a Classroom Setting Cost There’s a learning curve