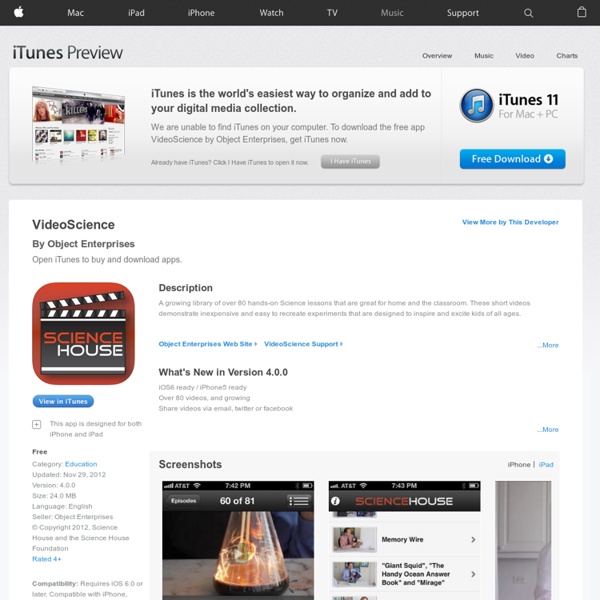 Description A growing library of over 80 hands-on Science lessons that are great for home and the classroom. These short videos demonstrate inexpensive and easy to recreate experiments that are designed to inspire and excite kids of all ages. VideoScience is hosted by Dan Menelly, a Science Teacher at the UN International School and a 2010 Einstein Fellow with the National Science Foundation in the Office of Cyberinfrastructure. VideoScience is proudly brought to you by Science House and the Science House Foundation. ...More Customer Reviews Amazing! by Log is hard... Though I'm a only one korean student in my school, it helps me to study more about science. Informative & Fun by Wonko41 I find this app to be a lot of fun and quite informational. Sometimes the guy is a little hard to understand. By by Room 33 Careful here!

Top 12 Education Technology Blogs The top twelve education technology blogs are packed full of thoughts from educators, health professionals, and technology experts dedicated to sharing information. These must-read blogs contain valuable insight into the tools and processes for technology in education. Yes Tech! Web: Yes Tech! Adobe Edge Animate proves HTML5 is no substitute for Flash For more than 15 years, professionals wishing to push the web envelope beyond the capabilities of HTML turned to Adobe Flash (or, more recently, Silverlight). Now, though, the future of web browsing is moving to mobile browsers that no longer support these plugins, so what’s the modern alternative? Without a plugin, the only way to do it is in the browser. Both Adobe and the web design community must follow Steve Jobs’ advice from 2010, when he announced Flash wouldn’t be allowed onto iOS: use open browser standards instead. As Jobs put it then, "HTML5, the new web standard... lets web developers create advanced graphics, typography, animations and transitions without relying on third-party browser plugins (like Flash)... Perhaps Adobe should focus more on creating great HTML5 tools for the future, and less on criticising Apple for leaving the past behind."

The Honor Roll: 50 Must-Read K–12 Education IT Blogs There’s no question that technology has transformed the classroom. Thanks to the proliferation of mobile-computing devices, social media and online-learning resources, and classroom-based tools such as interactive whiteboards and document cameras, digital literacy has become increasingly important for today’s students. But developing strong technological skills is only half the battle; mastering the subject matter using these tools is equally important. The technologies that give the so-called 21st century classroom its power have been the subject of many K–12 blogs, with teachers, administrators, IT leaders, vendors and even parents weighing in on everything from how to fund these tools to how to effectively integrate them into the curriculum.

Aeroplane Shooting Game Tutorial – Player Movement This is the first part from the aeroplane shooting game tutorial. Here are the other sections: 1. Fred Rogers Center - Purpose The Fred Rogers Archive preserves and organizes in a single location all the materials related to Fred Rogers personally and to the public person that became the iconic Mister Rogers. Archival materials are an essential resource for the work of the Fred Rogers Center for Early Learning and Children’s Media, but they are also intended to be a source for other scholarly and applied research into children’s television, early childhood development, and Fred Rogers’ unique role in bridging both fields. Fred’s creativity and imagination were expressed in music and stories. Before he became known as the host of Mister Rogers’ Neighborhood, he enjoyed composing songs and writing stories, often combining these into “operas.”

Photoshop Tutorial: Creating a Comic style image We’ve been busy with our email marketing chores here at Wired HQ, so it has been a while since I last did a Photoshop tutorial. The powers above have set aside some time for me to write another, so I trawled the internet for inspiration. With so many comic superheroes hitting the big screen in the past few months I thought it would be a cool idea to show you how to turn any photo into a comic style cell. So grab your coffee and take 15 minutes to have a go yourself. Step 1 Find a photo you want to give a comic book style effect to. Technology in Early Childhood: Advice For Parents and Teachers From A Trusted Source 3.28.12 | It seems like everyone has weighed in on the how-young-is-too-young debate around children and technology. Doctors, parents, researchers, software developers, media producers—the list goes on. But this month we finally heard from respected experts with direct experience: early childhood educators. The Fred Rogers Center partnered with the National Association for the Education of Young Children (NAEYC) on the release of a major new position statement, “Technology and Interactive Media as Tools in Early Childhood Programs Servicing Children from Birth through Age 8.” Some of the authors involved have devoted their lives to understanding how young children think and learn—and how the needs of, say, a 2-and-a-half-year-old are different from the needs of a 4-year-old. They spend their days interacting with and observing little kids through a developmental lens.