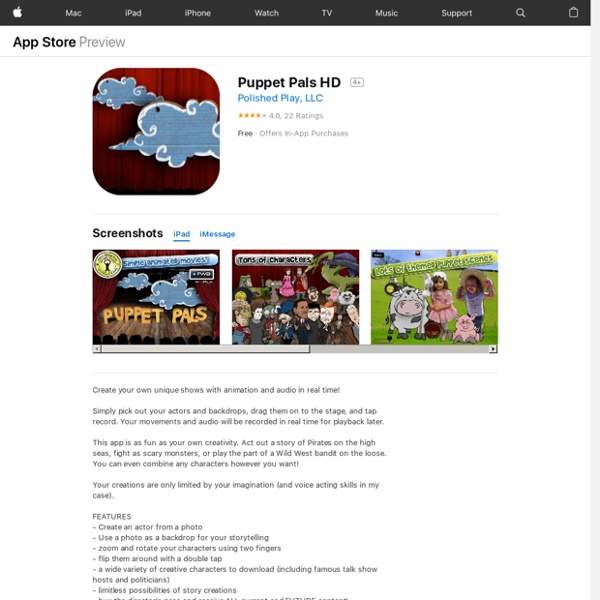 Description Spring/Summer SALE 20% off "Purchase Entire Catalog"! Create your own unique shows with animation and audio in real time! Simply pick out your actors and backdrops, drag them on to the stage, and tap record. Your movements and audio will be recorded in real time for playback later. This app is as fun as your own creativity. Your creations are only limited by your imagination (and voice acting skills in my case). FEATURES - Create an actor from a photo- Use a photo as a backdrop for your storytelling- zoom and rotate your characters using two fingers- flip them around with a double tap- a wide variety of creative characters to download (including famous talk show hosts and politicians)- limitless possibilities of story creations- buy the director's pass and receive ALL current and FUTURE content! ...More Customer Reviews Fantastic - above and beyond by jmaybe Let me start by saying that this app has allowed my child and I to create some priceless (to me and my wife) content. by A17B

MASH Game for iPhone, iPod touch and iPad - What's Your MASH Story? - iPhone Apps - Magnate Interactive This is the original MASH app for iOS, a digital update to the timeless pen and paper classic game. If you have an iPhone, iPod touch, iPad, or Android device (and even a Mac or Windows PC), you can discover your future with MASH! (Some spell it M.A.S.H. but we spell it without the dots. We figure you know what those letters mean - Mansion Apartment Shack House!) Watch this two-minute video to find out what MASH is all about.

The iPad 2 and Apple TV … Ed Tech Industry Killer? What would you rather get for your classroom, an iPad 2 and Apple TV or an Interactive Whiteboard? Are your teachers asking for Interactive Whiteboards? Hold on to that discussion and don’t answer until you know all of the possibilities! I think we now have the ability to put together a very highly effective digital classroom with the combination of iPad 2′s, a digital projector, and an Apple TV. MASH Pro - Apps on Android Market "Get ready for an exciting underwater adventure with Mermaid Doll House! Help mermaid & her fish friends design the mermaid dollhouse. Furnish your own Doll House with huge variety of antique furniture, beautiful mermaids, fishes and exciting underwater creatures.

10 Resources for Safer Internet Day 2012 Safer Internet Day takes place this week on the 7th February. The aim of the day is ‘ to promote safer and more responsible use of online technology and mobile phones, especially amongst children and young people across the world.’ Here’s a video which gives more information about the day: Here are some of my favourite resources that you can use to support your work on the day:

The Digital Learning Farm and iPad Apps  21st Century Learning Socratic Seminar and The Backchannel Humanities teacher, Shannon Hancock, at Graded, the American School of São Paulo, read and worked through The Alchemist by Paulo Coehlo with her 8th grade students. Not only did they read the text, learn about literary elements, but also learned to articulate and discuss in a professional manner the text … Visible Thinking in Math- Part 1 Create A Comic ★ Best comic and meme creation app on Android ★ Better than Rage, Troll, Emoji and Smiley apps. This is the only app which allows you to create Comics, Memes, Bitstrips and Funny pictures all from a single app ! And share them with your friends on Facebook, Twitter and by Email. Word Ladders Another word for choose A color between red and white. Change the third letter. Where you wash your hands. Change the first letter. “We ____ in our music class.”

The Very First App You Should Load on Your New iPad I am often asked by new iPad owners which apps they should install first. That’s a tough question as it all depends on each individual and how they want to use their new device. There are literally hundreds of lists out there about the best iPad apps — especially since a lot of those are year-end lists. But even if you send these lists to the new user they have to wade through these lists and make decisions based on limited information — after all, they just got the iPad and may not realize how much they can do with this great device. So, instead of sending all these lists — I’m not going to mention any of them here — simply because all you have to do is search for “Best iPad Apps” on your favorite search engine — try an app called AppStart!

mlearning Video Recording of the Presentation Presentation brought to you by American TESOL! Check out their other video presentations! Visit my blog, Teacher Reboot Camp, for more tips on effective technology integration! Presentation brought to you by American TESOL! Every Friday join us for a free webinar on language teaching! Classroom Displays Courses The Classroom Display Course Update: the next course starts January 2013 The course is ideal for anyone who wants to know more about designing effective classroom displays. There are usually a mix of teachers and teaching assistants, both primary and secondary, from the UK and elsewhere on the course. We will cover all the basic topics to help you become more confident about making displays in your classroom.

107 Favorite iPad Apps for K-8–Plus 1 Click for more information OK–I left one app off the list of 107 Favorite iPad Apps published earlier this week. It’s called Murky Reef. It’s advertised as ‘a series of thematic educational apps that encourages critical thinking through contextual game play’ and includes specific apps for language, science, and different grade levels. Best Talking Animal Android Apps - Free Talking Animal Android Applications In the today's fast-paced generation, people don't have time to get single smile a day in their modern life. Keep yourself entertained and engrossed by playing with some funny & amusing characters through refreshing & engaging Talking Animal Android Apps at AndroidApp101. All the available applications bring almost unlimited entertainment power on your portable smartphone. Some advanced features, functionality and real excitement make the users even more addicted. Talking to some known cutest creatures lets you actually feel the difference in your daily schedules. All these creatures will repeat each & everything that you say in adorable voices and make your life fun-filled as well as entertaining with new energy through these talking animal apps android.

Hallway Display We have a big inspection team coming to one of the school's I go between at the end of February and that got me thinking about hallway displays. I wanted a hallway display that could be left up all year and simply added to as the year progressed. I originally thought of doing what I did in the pictures above but labeling it 1st quarter, 2nd quarter, 3rd quarter, and 4th quarter (which I still think is a good idea). I approached the fourth grade science teacher and she was game to let me put it up outside of her room (my old classroom) and pull children to put together the display for the first two units in science. The idea is that then the children would add items to the next unit they are moving into.