The 50 most important English proverbs 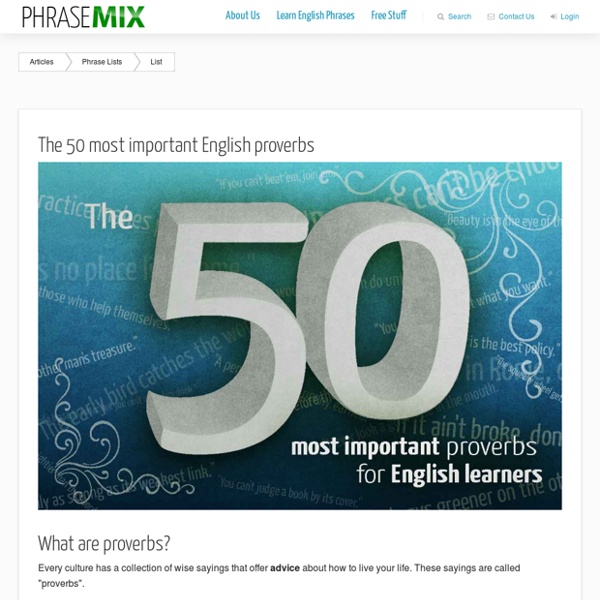 The 50 most important English proverbs What are proverbs? Every culture has a collection of wise sayings that offer advice about how to live your life. These sayings are called "proverbs". How can you use proverbs to learn English? It's good to know the really common English proverbs because you hear them come up in conversation all the time. You know what they say: when the going gets tough... (Read #5 below to learn the rest of this proverb and what it means.) Learning proverbs can also help you to understand the way that people in English-speaking cultures think about the world. Proverbs can also give you good example sentences which you can memorize and use as models for building your own sentences. The most important English Proverbs This is a list of some of the most important and well-known English proverbs. The meanings of some of these phrases have shifted over the years, so a proverb might have originally had a different meaning than the one I explain. Print this List

English Proverbs and Proverb Humor English Proverbs and Proverb Humor (revised 6 June 2003) Proverbs A stumble may prevent a fall All good things come to those who wait Everyone must row with the oars he has Every path has its puddle God tempers the wind to the shorn lamb One of these days is none of these days Revenge is a dish best served cold Worry often gives a small thing a big shadow See also Weather Proverbs (external) Beauty without grace is like a hook without bait. Contributed by Charon Muck, 26 Jan 2000

5 of My Favorite English Games for ESL Students I saved the best for last. My students requested this game more often than any other game we ever played. It's based on the old drinking game "Ring of Fire," modified for the classroom. Materials needed:A standard deck of playing cards, a whiteboard, 20-30 small slips of blank paper, and a bowl. 75 Simple British Slang Phrases You Should Probably Start Using Oh, the Brits. No-one can snark quite like they do, and there are certain turns of phrase that are so utterly delightful, the rest of the world really should sit up and take note. Below are just a few common British phrases that you might like to work into your daily vernacular, as they can pepper any conversation with a little extra something.

US State Department Creates Illustrations Depicting Differences Between British And American English People in America and the UK both speak English, and while most words remain the same there are a few differences that could potentially create a misunderstanding. To help English speakers from all over the world better communicate, the US State Department created these useful illustrations that highlight key differences between British and American English. English originated as early as the mid-5th century, and has since been brought to a number of countries. Over the years many changes and adaptations have taken place, creating unique discrepancies in the English language all around the world. Here are some of the main differences between British and American English, we bet you find at least a few that truly surprise you! 1.

864 FREE Speaking Worksheets Learning to speak a new language is definitely a challenge. It’s very difficult for your students to do if they don’t practice on a regular basis. Luckily, you need to look no further because BusyTeacher.org has the tools to help your students practice their speaking - and want to do it, too! Let’s face it, students aren’t always jumping for joy at the opportunity to speak a language they aren’t 100 percent comfortable with. Vocabulary Exercises Teaching Matters WebEnglish.se has compiled a list of 20 vocabulary exercises to practise or rehearse new words without bilingual translations. The aim is to provide the teacher with a variation of vocabulary practices and to reduce the use of translations in class. WebEnglish.se complies with the research that promotes learning new vocabulary in context and through various activities, diminishing the use of the students’ first language.

How to Learn English Words Learn English words quickly and easily with these tips and resources. We all know we must learn English words—and lots of them—to speak the language well. A native English speaker knows approximately 12,000 to 20,000 words according to experts. Mother tongue English speakers learn these words over a lifetime of informal daily life and in formal schooling. There are anywhere from 450,000 to one million English words depending on whether you count words separately (e.g., sit, sitting, sat, sitter) or as part of a word family (e.g., sit). We also learn words as part of idiomatic phrases (a set group of words that together have a meaning that's different than the separate words. e.g, sitting on top of the world). English Vocabulary Word Lists with Games, Puzzles and Quizzes This is a collection of English vocabulary word lists with online activities that use these word lists. Instead of studying the word list first, you can choose which game you want to play, then choose the set of words. Any Device - No Special Requirements Every Other Letter Game See a word with every other letter missing, guess what the word is, then see the answer. First & Last Game See a word with only its first and last letters, guess what the word is, then see the answer.

Native American Proverbs and Wisdom by Liz Olson With a long history, rich culture, and more than 300 spoken languages, the wisdom of Native American tribes has been passed down through the centuries. Don't be afraid to cry. It will free your mind of sorrowful thoughts. - Hopi Day and night cannot dwell together. - Duwamish It is better to have less thunder in the mouth and more lightning in the hand. - Apache