100 Most beautiful words in the English language* 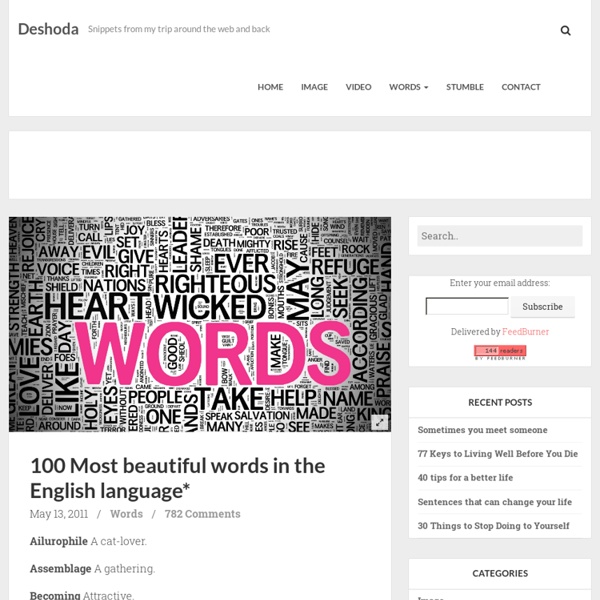 Related:  Articles That Caught My Eyes • ARTS - TO Orgensie • verbatim

Relief delayed for prisoners deemed wrongfully convicted - latimes.com Justice delayed was justice denied for Omer Harland Gallion. He died in prison in his sixth year of waiting for U.S. District Judge Percy Anderson to act on a decision that he had been wrongfully convicted and should be released or retried.

Types of Reasoning Disciplines > Argument > Types of Reasoning Reasoning within an argument gives the rationale behind why one choice, for example should be selected over another. Types of reasoning include: Abduction: the process of creating explanatory hypotheses. » New York Times 50 Most Challenging Words (defined and used) - Currently Obsessed The New York Times recently published a list of 50 fancy words that most frequently stump their readership. They are able to measure this data thanks to a nifty in-page lookup mechanism, which you can try here. Try double-clicking the word “epicenter”. Since the NYT didn’t include definitions of these words, I decided to post a job to MediaPiston to produce an article defining and using each word in the list. Voila!

101-year-old Detroit woman evicted in foreclosure DETROIT (AP) — A 101-year-old woman was evicted from the southwest Detroit home where she lived for nearly six decades after her 65-year-old son failed to pay the mortgage. Texana Hollis was evicted Monday and her belongings were placed outside the home. Her son, Warren Hollis, said he didn't pay the bill for several years and disregarded eviction notices. "I kept it from her because I didn't want to worry her," Warren Hollis told WXYZ-TV for a report that aired Monday night.

Hey, Facebook: Are You Really Censoring Political Free Speech in America? Either Facebook’s spam filters are completely out of whack or political free speech is being actively censored on the social network. What’s happening: On Sun. Aug. 14, liberal page administrators and bloggers in my network started spreading the word that they had been blocked from posting ANY content on ANY other wall for 15 days. No prior warning was given. CALLIHOO Writing Helps Character Feelings You can describe your character's feelings in more exact terms than just "happy" or "sad." Check these lists for the exact nuance to describe your character's intensity of feelings. SF Characters | SF Items | SF Descriptors | SF Places | SF EventsSF Jobs/Occupations | Random Emotions | Emotions List | Intensity of Feelings

There’s a Word for That: 25 Expressions You Should Have in Your Vocabulary Recently I came across this amazing little Tumblr named ‘OtherWordly‘ – itself a play on words. It consists of a collection of strange and lovely words from different languages through different times. What I like most about this selection of consonants and vowels – little meaning-carrying packages of vibration – is that they all try to point to the unspeakable, the transient or the neglected.