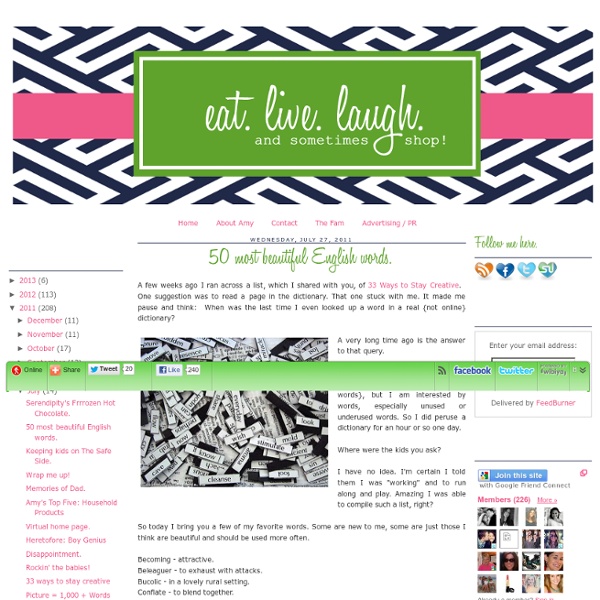 A few weeks ago I ran across a list, which I shared with you, of 33 Ways to Stay Creative. One suggestion was to read a page in the dictionary. That one stuck with me. It made me pause and think: When was the last time I even looked up a word in a real {not online} dictionary? A very long time ago is the answer to that query. I certainly do not fancy myself a wordsmith {an expert in the use of words}, but I am interested by words, especially unused or underused words. Where were the kids you ask? I have no idea. So today I bring you a few of my favorite words. Becoming - attractive. I'm off to gambol around with my children as we enjoy the halcyon days of summer! Cheers!

The joy of slang 25 October 2013Last updated at 20:19 ET Slang such as ain't, innit and coz has been banned from a school in south London. Author Charles Nevin celebrates modern slang and revisits phrases that have fallen out of fashion. Cor lummy! Please do not misunderstand me. The other banned words are equally interesting. Continue reading the main story “Start Quote Cockney rhyming slang survives well beyond its original inspiration, as in the currently popular marvin for starving hungry” End Quote And who would not admire rinsed for something worn out or overused - chirpsing for flirting, bennin for doubled-up with laughter, or wi-five for an electronically delivered high-five? Mouse potato for those who spend too much time on PCs is as striking as salmon and aisle salmon for people who will insist on going against the flow in crowds or supermarket aisles. Nor is tradition ignored. Ruby Murray Your family must have some similar sayings handed down. Brush up your Shakespeare?

Rare words and their meanings so after a bit of a dissapointment with the "Great words" thread, i decided to dedicate a thread to rather rare and mystique and rarely used words and their meanings. This time, its like Great words, but posting a meaning is a MUST DO. i will start you off with the list of words i have defined in the other thread, also i will add definitions to words i have posted today, and lastly i will add a few more words just to tickle the linguists Oh, these are all real words, to my best belief i have not come up with any (in this list) but feel free to call me on that epeolatry - worship of words acquiesce - satisfy fen - swamp atrabilious - bad-tempered or irritable absquatulate - depart copacetic - good or even excellent alexipharmic - having a nature of an antidote (i like this one cuz it has my name in it esculent - edible empasm - a powder-like ancient medicine used to take the smell away... pinguescence - the process of becoming fat kerfuffle - commotion nychthemeron - period of one day (24 hrs)

"Rappaccini's Daughter" (Hawthorne) A young man, named Giovanni Guasconti, came, very long ago, from the more southern region of Italy, to pursue his studies at the University of Padua. Giovanni, who had but a scanty supply of gold ducats in his pocket, took lodgings in a high and gloomy chamber of an old edifice, which looked not unworthy to have been the palace of a Paduan noble, and which, in fact, exhibited over its entrance the armorial bearings of a family long since extinct. The young stranger, who was not unstudied in the great poem of his country, recollected that one of the ancestors of this family, and perhaps an occupant of this very mansion, had been pictured by Dante as a partaker of the immortal agonies of his Inferno. These reminiscences and associations, together with the tendency to heart-break natural to a young man for the first time out of his native sphere, caused Giovanni to sigh heavily, as he looked around the desolate and ill-furnished apartment. "Does this garden belong to the house?" "Aha!"

Classic Russian Writers: For teh Internets: Vsevolod M. Garshin's "The Signal." In Garshin’s original story, written in the 1880s, Semyon is a veteran of the Russo-Turkish War who takes a job as a railroad track-walker, which means he lives with his family in a hut near railroad tracks and is responsible for maintaining a certain portion of the rails, including such things as clearing away snow in winter. His neighboring track-walker, Vasily, likewise lives in a hut, some six or seven miles away. In my revision, the job and its duties are brought up to date in terms of modern technology, and put in an urban setting: Vasily and Semyon, a veteran of Afghanistan, are now Metro track-walkers in Washington, D.C. Semyon Ivanonv was a track-walker. Semyon Ivanov’s health had been completely shattered. Semyon’s unit once been on the firing line. He returned from the campaign with limbs unbroken but crippled with PTSD. Then the wife went to work at Walmart, and Semyon continued to apply for jobs all over DC. “You are Ivanov?” “Yes, sir.” “What are you doing here?” “Idiot!

11 Lessons That 'Jane Eyre' Can Teach Every 21st Century Woman About How To Live Well Charlotte Brontë's "Jane Eyre" was published on this day in 1847. While I'm a very big fan of most Victorian literature, "Jane Eyre" made an impression on me that other novels formerly hadn't. "Jane Eyre" is not just a gothic romance novel. It's a bildungsroman, a coming-of-age story. It is the first of its kind in some ways, as it's written by a woman about the interior life of a woman. I love that Jane Eyre is an unconventional heroine. The novel was very shocking for its time. Every time I encounter a woman who hasn't read this book, I advise reading it immediately. This is not to suggest that Jane Eyre didn't have flaws. Still, there's much to be learned from the way she chooses to live. 1. 2. 3. 4. 5. 6. 7. 8. 9. 10. 11.

1001 Books You Must Read Before You Die You are using the new servers! | About | Privacy/Terms | Help/FAQs | Blog | Store | APIs | TinyCat | Legacy Libraries | Early Reviewers | Common Knowledge | 112,473,649 books! | Top bar: Always visible Copyright LibraryThing and/or members of LibraryThing, authors, publishers, libraries, cover designers, Amazon, Bol, Bruna, etc. Why Kafka Matters In the July/August issue of the Atlantic, Joseph Epstein uses the release of Saul Friedlander’s book “Franz Kafka: The Poet of Shame and Guilt" to pose the larger question of whether Kafka is still relevant. “Great writers are impressed by the mysteries of life; poor Franz Kafka was crushed by them,” he observes, noting that “Kafka’s small body of work, which includes three uncompleted novels, some two dozen substantial short stories, an assemblage of parables and fragment-like shorter works, diaries, collections of letters (many to lovers whom he never married), and the famous ‘Letter to His Father,’” represents an achievement so insular that it “cannot be either explained or judged in the same way as other literary artists.” What this means, Epstein goes on, is that, in Kafka’s universe, “illogic becomes plausible, guilt goes unexplained, and brutal punishment is doled out for no known offense.” What do we make of such an image?

Part I: England Your England As I write, highly civilized human beings are flying overhead, trying to kill me. They do not feel any enmity against me as an individual, nor I against them. They are ‘only doing their duty’, as the saying goes. Most of them, I have no doubt, are kind-hearted law-abiding men who would never dream of committing murder in private life. On the other hand, if one of them succeeds in blowing me to pieces with a well-placed bomb, he will never sleep any the worse for it. He is serving his country, which has the power to absolve him from evil. One cannot see the modern world as it is unless one recognizes the overwhelming strength of patriotism, national loyalty. Also, one must admit that the divisions between nation and nation are founded on real differences of outlook. When you come back to England from any foreign country, you have immediately the sensation of breathing a different air. But talk to foreigners, read foreign books or newspapers, and you are brought back to the same thought.

Top 10 Most Beautiful Places to Read Books Mark Twain said ““In a good bookroom you feel in some mysterious way that you are absorbing the wisdom contained in all the books through your skin, without even opening them.” I am sure Mark Twain will be more than amazed with look of those beautiful libraries around the world. Today’s article combine the top 10 most beautiful old, rustic and vintage looking libraries around the world. Every one of us will be more than happy to spend just few moments reading books at those beautiful libraries… The Libreria Acqua Alta in Venice Shakespeare and Company in Paris House on the Rock in Wisconsin New York Public Library The Royal Portuguese Reading Room The Bodleian Libraries at Oxford University The Biltmore House Library The Hearst Castle Library The University of Coimbra General Library The Library of Congress

Why do we abandon books halfway through? When it comes to finishing books, there are two camps of readers – those who push themselves to complete even the most trying of tomes, and those who think life is “too short for bad books.” Skip to next paragraph Recent posts Subscribe Today to the Monitor Click Here for your FREE 30 DAYS ofThe Christian Science MonitorWeekly Digital Edition Still, for most readers, there is an almost inexplicable guilt associated with abandoning a book halfway, an intriguing phenomenon explored in a recent Wall Street Journal article entitled “Why Leaving a Book Half-Read is So Hard.” "[C]hoosing to terminate a relationship with a book prematurely remains strangely agonizing, a decision fraught with guilt,” writes the WSJ’s Heidi Mitchell. What’s behind that guilt? Finishing tasks – or books, or even meals – is a virtue ingrained in us from a young age. So why do we abandon books? “In the age of the e-reader, dropping a book has never been easier,” writes the Journal. "Catch-22," by Joseph Heller

Your mega summer reading list: 180+ books recommended by TEDsters A look at the famous TED Bookstore at TED2013. Photo: Michael Brands Books can entertain, sucking you like a tornado into incredible new worlds. Books can teach, giving you a richer understanding of time periods, people and ideas you’ve never been exposed to. Lisa Bu: How books can open your mind In today’s talk, TED’s own Lisa Bu introduces us to the concept of “comparative reading,” the practice of reading books in pairs, to give deeper context and reveal new insights. Every year at TED, we set up a bookstore filled with books recommended by TEDsters of note. Jane Eyre by Charlotte Bronte. Cheaper by the Dozen by Frank B. The Good Earth by Pearl S. Benjamin Franklin: An American Life by Walter Isaacson. John Adams by David McCullough. Personal History by Katharine Graham. The Snowball: Warren Buffett and the Business of Life by Alice Schroeder. Lamb: The Gospel According to Biff, Christ’s Childhood Pal by Christopher Moore. The Power of Myth by Joseph Campbell.