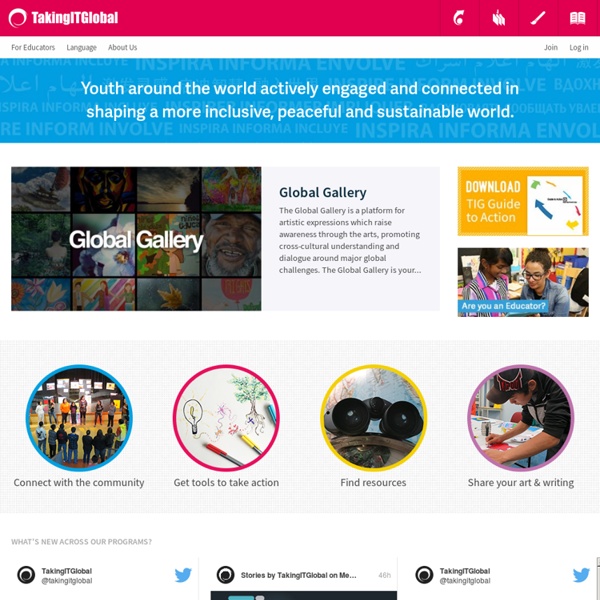 iPad students learn the most important skill There’s something in the air and like the best of things, it’s exciting and scary at the same time. More and more articles like this one and this one and even this one proclaim the death of so many jobs over the next 20 years and magazines like this one explain why people not learning to adapt will be disastrous for everyone, especially current school kids. The major problem for school children is that traditionally, the classroom doesn’t demand they practice adapting to a situation or problem solve open-ended enough scenarios. It’s always been mostly a matter of fitting in and following the guidelines laid out by the teacher. It’s heartening to read stories like this one that show things are changing but these examples still exist as a minority in education.

A New Tool for Turning Webpages Into Whiteboards July, 2015 Here is a new interesting tool for teachers. Whiteboard , we discovered via Stephen Gale, is a Chrome app that enables you to draw on top of webpages using things such as a stylus, trackpad, mouse…etc. The app is particularly useful for annotating and illustrating content on a webpage. Whiteboard is still in beta phase and as such several useful features are still in the making. These include the ability to save your work in image file, add different shapes and lines to your annotations and many more. For now, you can only change the background settings of a webpage, change its colour and customize its opacity, add lines and draw using different colours, add and customize layers.

Global Students- Global Perspectives Projects I am pleased to share with you an opportunity for Middle School Students to collaborate on a global perspectives project. Mark Engstrom, the Assistant Principal and Middle School Geography teacher at my new school in São Paulo, Brazil, and his collaboration partner, Laurie Clement, a MS teacher in Windsor, Canada, have put together various projects to connect middle school geography students from around the world and to facilitate collaboration among them. This past school year, our students in Brazil worked together with students from Canada, USA and Sweden. They are expanding this opportunity to more schools and countries. Teaching Students to Reflect in Steps Self-assessment and reflection is key to the forward movement of a student’s learning and potential achievement. The more able a student is to talk about his/her learning in a cognizant way, the better chance he/she has in achieving his/her goals. This is why it is imperative for us to teach students how to do this effectively. We can’t merely assume that by saying to a student, “go reflect on this last assignment,” that he/she will know what we mean.

iPad classes are affecting our children's learning: parents Last updated 21:57, July 5 2015 istock Schools across the Waikato are adopting the use of devices, such as iPads, in school. Fears for children's reading and writing skills are becoming more prevalent as schools replace text-books with iPads. Some parents have noticed their kids' spelling and handwriting skills have deteriorated since they were submerged into separate bring-your-own-device (BYOD) classes, where tablets are heavily used.

» 9 Mindfulness Rituals to Make Your Day Better :zenhabits “Smile, breathe and go slowly.” - Thich Nhat Hanh, Zen Buddhist monk Post written by Leo Babauta. Are you simply moving through your day, without fully living? I did this for many years. It was as if life were just passing by, and I was waiting for something to happen. 10 Online Tools to Engage Students in Studying Process - Fedena Blog When a teacher manages to engage his students in the learning process through interactive techniques, they are able to increase their focus and improve their critical thinking skills. Active participation is important for students to gain meaningful learning experiences in the classroom. How do you motivate your students to get engaged, when most of them don’t give you a chance to show how fun learning can be?

Classroom Technology Is Not a Substitute for Teaching Home » Articles » Classroom Technology Is Not a Substitute for Teaching Teaching is one of the most difficult jobs in the world but those who are involved in it'll say that it's very rewarding. After all, being able to influence the minds of the future can give any teacher a great deal of satisfaction and pride, which will hopefully help make up for some of the rougher moments. Of course, all jobs will have positive and negative moments around it, not just teaching but it's fair to say that teaching is a role that many people hold in high regard.

Students want better digital credentials by Ron Bethke, eCampus News Assistant Editor, @eCN_RonBRead more by Ronald Bethke April 23rd, 2015 Innovation in online credentialing can help students better display learning outcomes and the value of their education to employers on social sites. According to a new whitepaper revealed by ed-tech company Parchment at Baltimore’s AACRAO conference on April 13th, a majority of students believe it would be useful to display official credentials on a social site. However, the report suggests their is a lot of room for innovation on the part of institutions. The ideas generated in Parchment’s whitepaper, titled “Extending the Credential; Empowering the Learner,” stem from the results of two surveys which polled over 500 recent college graduates and 100 registrars. Credentialing is also a rising issue in higher education.