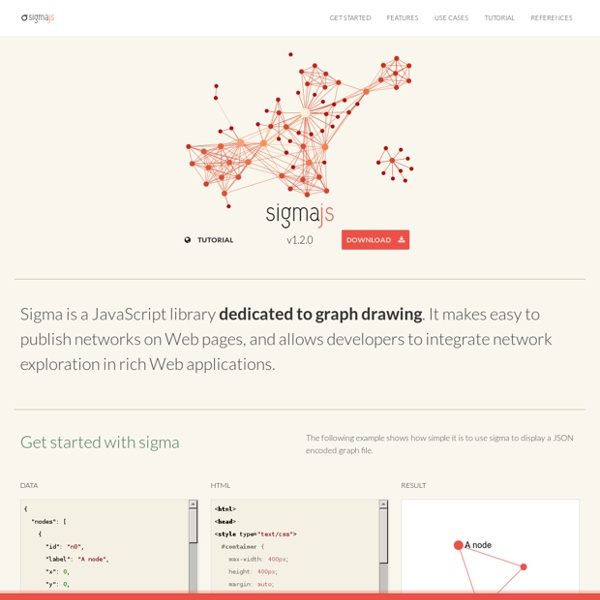 Here, let's just assume that in our web page, we have an HTML element with the id sigma-container to display our graph. This element's width and height can be whatever we want, and sigma will adapt the elements it adds into it by itself. Also, we must import sigma and add a script tag that will contain the JavaScript code. Then, it's pretty easy: since sigma provides a plugin dedicated to load and parse GEXF graph files. So, all we have to do is to load the plugin and use it, as described in the plugin's documentation. At this point, the graph should already be displayed, and manipulated with the mouse or touch:

ForceAtlas2, the new version of our home-brew Layout The new version of the build-in layout ForceAtlas is now released. It is scaled for small to medium-size graphs, and is adapted to qualitative interpretation of graphs. The equations are the same as ForceAtlas 1, but there are more options and innovative optimizations that make it a very fast layout algorithm. It is good enough to deal with very small graphs (10 nodes) and fast enough to spatialize 10,000 nodes graphs in few minutes, with the same quality.

Gantt dhtmlxGantt is an open source JavaScript Gantt chart that helps you visualize a project schedule in a nice-looking chart. It can show the dependencies between tasks as lines and allows you to set up different relationships between tasks (finish-to-start, start-to-start, end-to-end). dhtmlxGantt provides flexible API and a large number of event handles, which gives you the freedom to customize it for your needs. Projects and tasks are comfortably organized into a hierarchical structure displayed in the left pane of the chart.

JavaScript Image ASCIIfier Utilizing magic and the <canvas> element to turn internet images into sexy ASCII art Download : jsascii.js Example usage: Original image: ASCII image: jsAscii grabs the image from the page and paints it on a hidden canvas element. The pixel data can then be retrieved from the canvas and converted into ASCII code. Tree diagrams in d3.js The following post is a portion of the D3 Tips and Tricks book which is free to download. To use this post in context, consider it with the others in the blog or just download the the book as a pdf / epub or mobi . What is a Tree Diagram? The ‘Tree layout’ is not a distinct type of diagram per se. Instead, it’s representative of D3’s family of hierarchical layouts. It’s designed to produce a ‘node-link’ diagram that lays out the connection between nodes in a method that displays the relationship of one node to another in a parent-child fashion.

Notification Styles Inspiration Some simple ideas and effects for unobtrusive website notifications. A little script is employed for showcasing some styles and CSS animations are used for the effects. View demo Download source Using Sigma.js with Neo4j I’ve done a few posts recently using D3.js and now I want to show you how to use two other great Javascript libraries to visualize your graphs. We’ll start with Sigma.js and soon I’ll do another post with Three.js. We’re going to create our graph and group our nodes into five clusters. You’ll notice later on that we’re going to give our clustered nodes colors using rgb values so we’ll be able to see them move around until they find their right place in our layout. We’ll be using two Sigma.js plugins, the GEFX (Graph Exchange XML Format) parser and the ForceAtlas2 layout.

Gliffy Gliffy’s friendly editor, vast symbol libraries, and handy templates make it easy to communicate your thoughts and plans visually. You’re just minutes away from all the diagrams you need: Flow Charts SWOT Analysis UML Charts Venn Diagrams Getting Started with Three.js ## Introduction I have used Three.js for some of my experiments, and it does a really great job of abstracting away the headaches of getting going with 3D in the browser. With it you can create cameras, objects, lights, materials and more, and you have a choice of renderer, which means you can decide if you want your scene to be drawn using HTML 5’s canvas, WebGL or SVG. And since it’s open source you could even get involved with the project. But right now I’ll focus on what I’ve learned by playing with it as an engine, and talk you through some of the basics.

The 14 Best Data Visualization Tools Nishith Sharma is the co-founder of frrole, a social intelligence startup. Raw data is boring and it’s difficult to make sense of it in its natural form. Add visualization to it and you get something that everybody can easily digest. Not only you can make sense of it faster, but you can also observe interesting patterns that wouldn’t be apparent from looking only at stats. All Killer, No Filler This one’s different, trust us.

17 jQuery Plugins For Form Functionality & Validation Here is another beautiful and useful collection of some of the best jQuery plugins to help you with form functionality and validation. We have previously discussed how much jQuery has contributed to the world of web development. In this round up, we are presenting jQuery plugins for form functionality and validation. Validation can be a real mess for some developers, and these plugins will be of great assistance for them. With these plugins, they can easily build and customize forms in an attractive way and help them to sort out form validation related problems. We hope that you will like this collection.

How to Use Sigma.js with Neo4j I’ve done a few posts recently using D3.js and now I want to show you how to use two other great Javascript libraries to visualize your graphs. We’ll start with Sigma.js and soon I’ll do another post with Three.js. We’re going to create our graph and group our nodes into five clusters. yEd - Graph Editor yEd is a powerful desktop application that can be used to quickly and effectively generate high-quality diagrams. Create diagrams manually, or import your external data for analysis. Our automatic layout algorithms arrange even large data sets with just the press of a button. yEd is freely available and runs on all major platforms: Windows, Unix/Linux, and Mac OS X. The latest release is version 3.12.2 colony Colony is a neat little visualisation tool for exploring Node projects and their dependencies using d3.js. Each file is represented as a node in the graph. If one file depends on another, a link is made between the two files.