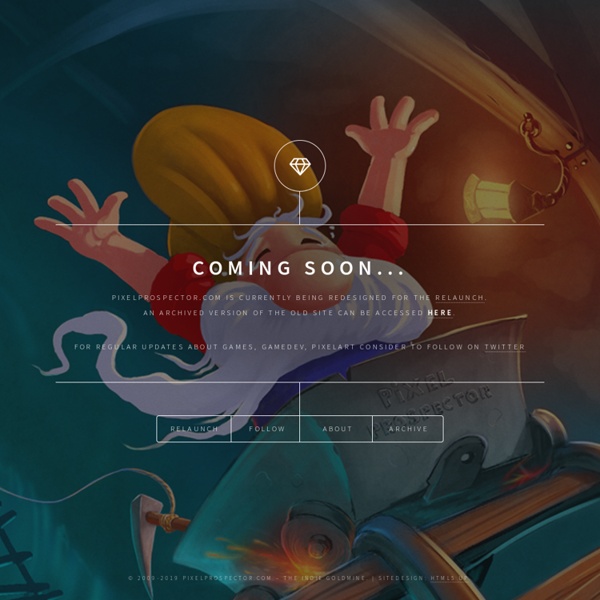 Godot Engine – Features Use Your Eyes: Work inside a simple, yet flexible and feature rich editor, with tools popping up to aid you when needed. Uncluttered UI, where most tools are context-sensitive.Huge amount of tools to aid you and your team in content creation.Editor designed not only for programmers, but for artists,animators, level designers, graphic designers, game designers, etc.Built-In documentation browser and code editor to avoid distractions. Multi-Platform Editor: Develop games using your favorite operating system: Godot works on Windows, OSX and Linux.Editor runs in 32 and 64 bits, in all platforms.Small download (around 20mb), and you are ready to go.Easy to compile yourself (no dependency hell).

Game Design Secrets of the Greggman Like most people in this industry I think I know what makes a good game. Of course also like most people I’ve never released a game that is actually considered good. Something always conspires to get in the way. As Mark Cerny once said, "Everything has to go right to have a hit, but only one thing has to go wrong.". I do strongly believe that if all the rules below are followed a good game will come out if it. Actually that’s not true.

Lars Doucet's Blog - Flash is dead, long live OpenFL! I've been a stalwart Flash developer for 15 years, so nothing bothers me more than greatly exaggerated reports of Flash's premature demise. Even today, Flash remains a very viable platform with a large install base and a relatively healthy commercial ecosystem. Many awesome games have been written in Flash and/or Adobe AIR, including our own Defender's Quest, which to date has sold over 125,000 copies.

Subtractive Design: Making Platforming Games Making Platforming Games I’ve had quite a bit of interest from people wanting to hear some advice on making side scrolling platforming games... So I’ve taken some time to write up some of my thoughts on making a solid, traditional, 2D or 3D side scrolling platformer. It takes a lot of time and effort to make something look and feel great. Epic Announces Dramatic Changes To Unreal Engine 4 By John Walker on March 19th, 2014 at 4:30 pm. Update: Now with trailer. Epic has announced today that Unreal Engine 4 is to dramatically change its licensing model. From now on anyone can subscribe to Unreal Engine 4 for $19 a month, and then release those games commercially for a 5% gross revenue share with the developer.

Hyperloop - UW-Physics Garage This project is a Garage home for the UW-Madison student collective BadgerLoop participating in Elon Musk's design challenge. On June 15, 2015 SpaceX announced plans to build a one mile, sub-scale test track of the Hyperloop concept. This is a conceptual, futuristic mode of transportation proposed by Elon Musk in 2013 via a white paper: In addition to building this test track, SpaceX is hosting a design-build-test competition for the pod for this track, targeting university and non-university teams alike from across the world, for the 2015-2016 school year. The 2nd half of this CNN video provides some background.

List of game engines Many tools called game engines are available for game designers to code a game quickly and easily without building from the ground up. Free/libre and open source software[edit] Note: The following list is not exhaustive. It mixes game engines with rendering engines as well as API bindings without any distinctions. Proprietary[edit] Commercial[edit] The ultimate guide to startup pre-launch marketing in 5 simple steps Successful CMOs achieve growth by leveraging technology. Join us for GrowthBeat Summit on June 1-2 in Boston, where we'll discuss how to merge creativity with technology to drive growth. Space is limited. Request your personal invitation here! How to Make a Platform Game Like Super Mario Brothers - Part 1 This post is also available in: Chinese (Simplified) Learn how to make a game like Super Mario! This is a blog post by iOS Tutorial Team member Jacob Gundersen, an indie game developer who runs the Indie Ambitions blog.