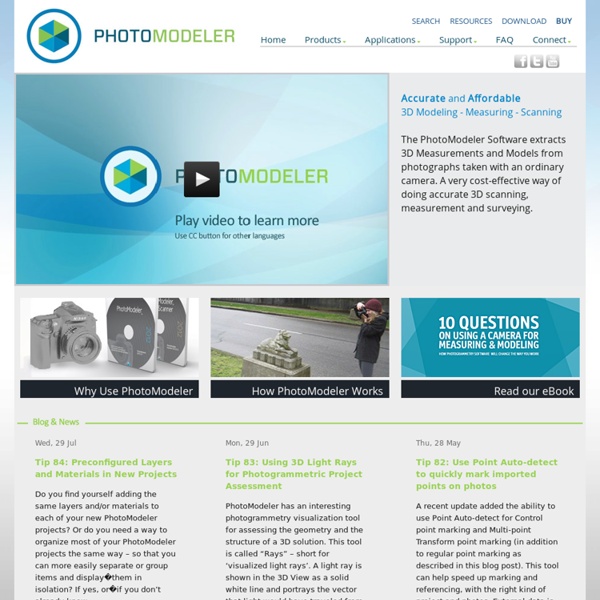 Neo-Geography Toolkit - Stereo Pipeline Examples The following HiRISE 3D surface models were built using the Stereo Pipeline. We provide them here as examples of the data products that can be generated using the software. For more information about these examples, refer to the "Data Processing Examples" Appendix in the Stereo Pipeline User's Guide. HiRISE Columbia Hills (Crop) HiRISE observations PSP_001513_1655 and PSP_001777_1650 are on the foor of Gusev Crater and cover the area where the MER Spirit landed and has roved, including the Columbia Hills. [ KML | 3D Mesh | Orthoimage | DEM | stereo.default ] StereoScan Agisoft StereoScan is an easy to use 3D modeling tool for automatic generation of textured 3D models from individual stereo pairs. The stereo pairs are not required to be calibrated or aligned, and can be captured by hand from any generic positions. Based on the close-range photogrammetry methods, StereoScan automatically calibrates the images, including camera positions and lens distortions. Both image alignment and 3D model reconstruction is fully automated. Supported formats Input formats: JPEG, TIFF, PNG, BMP, JPEG Multi-Picture Format (MPO).

Internet Archaeol. 25. Review of ImageMaster. Anthony Masinton Dept. Archaeology, University of York. Email: awm106@york.ac.uk Photogrammetry Photogrammetry is an estimative scientific method that aims at recovering the exact positions and motion pathways of designated reference points located on any moving object, on its components and in the immediately adjacent environment. Photogrammetry employs high-speed imaging and the accurate methods of remote sensing in order to detect, measure and record complex 2-D and 3-D motion fields (see also SONAR, RADAR, LiDAR etc.). Photogrammetry feeds the measurements from remote sensing and the results of imagery analysis into computational models in an attempt to successively estimate, with increasing accuracy, the actual, 3-D relative motions within the researched field. Its applications include satellite tracking of the relative positioning alterations in all Earth environments (e.g. tectonic motions etc), the research on the swimming of fish, of bird or insect flight, other relative motion processes (International Society for Photogrammetry and Remote Sensing). Integration[edit]

Match Photo: Modeling from photos Creating a 3D model to match a photo Use the matching process to create a 3D model to match one or more photos of a building or structure. This process is best suited for making models of images of structures containing features representing parallel lines, such as the top and bottom of a square window. Note: There are several You Tube videos on the Match Photo feature, including two videos that use the same example found in this article. These videos might use an different version of SketchUp, but the process and Match Photo tools are exactly the same. To create a 3D model to match photos of a building or structure:

Capturing reality with automatic 3D photogrammetry software Smart3DCapture™ applies to a variety of application areas where it dramatically enhances productivity or even opens new business opportunities. Image courtesy of InterAtlas 3D Cartography geographic portalstopographic databases Image courtesy of Idaho Airships Architecture, engineering & construction Architectural applications « Punchcard: VideoTrace VideoTrace allows a user to create models of object from video sequences. There are a number of applications which require models of buildings, including those in architecture and defence. VideoTrace thus enables a user to generate a model of a building or a set of buildings from a video sequence. These sequences can be captured from street level, or from above.VideoTrace uses image data to interpret the user interactions, but exploits 3D point clouds when available, to guide the fitting process.

Open Source Photogrammetry: Ditching 123D Catch – We Did Stuff This is part one in a series on open source photogrammetry. In part two, I’ll flesh out more VFX-centric application of this workflow. Before I start, big thanks to: Dan Short: for showing me his awesome 123d models that sparked this whole ideaHannah Davis: debugging + emotional support + snacks So a few weeks ago, Dan Short showed me 123D Catch. It was awesome.