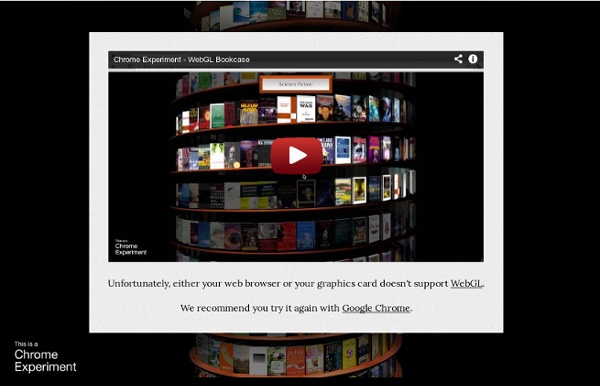 Unfortunately, either your web browser or your graphics card doesn't support WebGL. We recommend you try it again with Google Chrome.

.htaccess Files for the Rest of Us .htaccess files are used to configure Apache, as well a range of other web servers. Despite the .htaccess file type extension, they are simply text files that can be edited using any text-editor. In this article, we'll review what they are, and how you can use them in your projects. Please note that .htaccess files don't work on Windows-based systems, although they can be edited and uploaded to a compatible web server, and on Linux-based systems they are hidden by default.

Processing.js Basic Syntax A brief look at the structure of a Processing sketch reveals how easy it is to program interactive visualizations. As with any language, you begin by defining your global variables. Machine learning is way easier than it looks It’s easy to believe that machine learning is hard. An arcane craft known only to a select few academics. After all, you’re teaching machines that work in ones and zeros to reach their own conclusions about the world. You’re teaching them how to think! CSS Buttons with Pseudo-elements In this tutorial, I'll show you how to create buttons with a twist, using just one anchor tag per button and the great power of CSS. View demo Download source Hola, amigos. Expanding Text Areas Made Elegant An expanding text area is a multi-line text input field that expands in height to fit its contents. This UI element is commonly found in both desktop and mobile applications, such as the SMS composition field on the iPhone. Examples can also be found on the web, including on Facebook, where it’s used extensively. It’s a good choice wherever you don’t know how much text the user will write and you want to keep the layout compact; as such, it’s especially useful on interfaces targeted at smartphones. Issue № 338 Despite the ubiquity of this control, there’s no way to create it using only HTML and CSS.

ZUI Site Riot Tutorial info Knowledge needed: CSS, Intermediate JavaScript Requires: text editor, browser that supports CSS3 transforms Project time: 4 hours With CSS3 transforms now supported in most major browsers, we have the delightful opportunity to experiment creating innovative layouts and interfaces. While the paradigm of the vertical website will continue to prosper, there’s a world of possibilities out there to explore.

Heroku Breaks Through with Facebook Cloud Integration Following hot on the heels of its recent announcement that it would add support for Java to the support already given to apps written in Ruby, Node.js and Clojure, Platform-as-a-service provider Heroku this morning announced a breakthrough partnership with Facebook that effectively allows anyone with a Heroku account to become an adept, cloud-based Facebook app developer. To give SitePoint readers a head start, we’ve obtained permission to publish the following tutorial, drawing on functionality in Facebook that is only available from today. Let me hand you over to Adam Wiggins of Heroku. Getting Started with Your Facebook App on Heroku This guide is for Facebook developers who are creating apps on Heroku via the Facebook Cloud Services integration. It assumes no previous knowledge of Heroku.

CSS Selectors and Pseudo Selectors and browser support This page has not been updated for some time and some of the browser versions are obsolete - I'm working on a better format for the page, so check back every now and then :) The following is a range of CSS tests of the most common browsers' support for selectors and pseudo selectors. The tests includes basic stuff from the good old days of CSS1 and funky stuff from the future (CSS3). If you feel like reading more about the selectors and which attributes they support, the W3C is the place to go! The internet is our social network. What if social networks were more like email? What if they were all inter-connected, and you could choose which software (and even which provider) to use based purely on what they offered you? Now they are!

Font sizing with rem Determining a unit of measurement to size our text can be a topic of heated debate, even in this day and age. Unfortunately, there are still various pros and cons that make the various techniques less desirable. It's just a matter of which less-desirable is most desirable. There are two main techniques that are extolled: Size with pxSize with em Let's review these two approaches before I reveal the magical third.