HTML5 and The Future of the Web - Smashing Coding 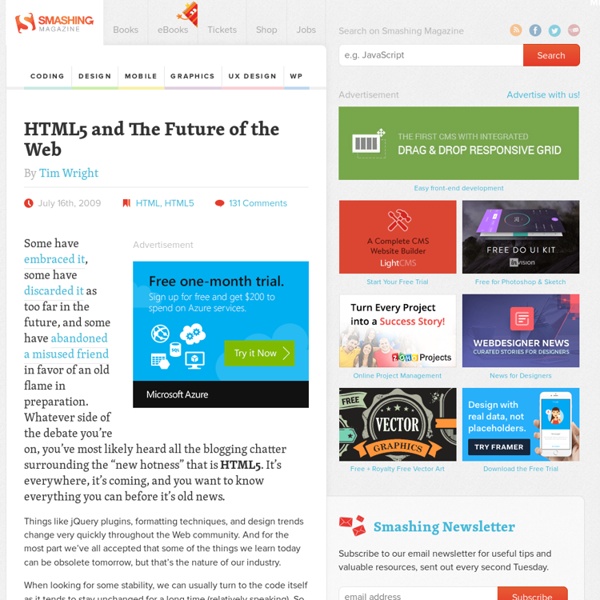 Advertisement Some have embraced it1, some have discarded it2 as too far in the future, and some have abandoned a misused friend3 in favor of an old flame in preparation. Whatever side of the debate you’re on, you’ve most likely heard all the blogging chatter surrounding the “new hotness” that is HTML5. It’s everywhere, it’s coming, and you want to know everything you can before it’s old news. Things like jQuery plugins, formatting techniques, and design trends change very quickly throughout the Web community. When looking for some stability, we can usually turn to the code itself as it tends to stay unchanged for a long time (relatively speaking). In this article, I’m hoping to give you some tips and insight into HTML5 to help ease the inevitable pain that comes with transitioning to a slightly different syntax. Welcome to HTML5. What are the basics? The DOCTYPE When I first started researching HTML5 a few months ago, one of the main things I struggled to find was the doctype. Conclusion

HTML5 enabling script 7 Jan Since HTML5 is getting more attention by way of marking up our new pages, and the only way to get IE to acknowledge the new elements, such as <article>, is to use the HTML5 shiv, I’ve quickly put together a mini script that enables all the new elements. Download html5shiv.js and must be inserted in the head element (this is because IE needs to know about the element before it comes to render them – so it can’t sit in the footer of the page, i.e. below the elements in question). I’ve updated this post to link to Alexander Farkas’s version of the shiv – it’s the very latest and my simple one line script. The one I originally released was (I thought) beautifully small, but didn’t support print styles nor dynamic injection of HTML5 elements. Good thing there are smarter folk than I!

HTML 5 Latest Published Version: Latest Editor's Draft: Previous Versions: Editors: Robin Berjon, W3C Steve Faulkner, The Paciello Group Travis Leithead, Microsoft Erika Doyle Navara, Microsoft Edward O'Connor, Apple Inc. Silvia Pfeiffer Ian Hickson, Google, Inc. This specification is also available as a single page HTML document. Copyright © 2013 W3C® (MIT, ERCIM, Keio, Beihang), All Rights Reserved. This specification defines the 5th major version, first minor revision of the core language of the World Wide Web: the Hypertext Markup Language (HTML). This section describes the status of this document at the time of its publication. If you wish to make comments regarding this document in a manner that is tracked by the W3C, please submit them via using our public bug database. Implementors should be aware that this specification is not stable.

putting the &quot;new&quot; in &quot;new media literacies&quot;: a helpful visual aid Here's a Prezi project I've been working on to visualize some key features of what Kress, Lankshear & Knobel, Scribner & Cole, and others find salient in emerging new media literacy practices. This visualization emphasizes Lankshear & Knobel's characterization of two distinct approaches to the "new" in "new media literacy." As they explain, the use of 'new' in the paradigmatic sense is a sociocultural approach to literacy practices: the New Literacy Studies comprise a new paradigm for looking at literacy as opposed to the paradigm that already existed that was based on psychology. Okay, that's the paradigmatic sense of 'new.' refers to the idea that changes have occurred in the character and substance of literacies associated with changes in technology, institutions, media, the economy, and the rapid movement toward global scale in manufacture, finance, communications and so on. Gunther Kress, in "Literacy and Multimodality," emphasizes design, perhaps above all else.

Understanding aside Please note aside has been redefined since this post was written, please read the updated article. HTML 5 offers a new element to mark additional information that can enhance an article but isn’t necessarily key to understanding it. However, in the interpretation of <aside> there lies confusion as to how it can be used, and with that there is demand for the Doctor to step up and clear the air. In this article I will look at what <aside> was created for, including sample uses and how not to use this useful, misunderstood element. First, a look at how the HTML 5 specification defines <aside>: The aside element represents a section of a page that consists of content that is tangentially related to the content around the aside element, and which could be considered separate from that content. What can often trip-up someone reading the specification is the use of the word “sidebar”. How strict should this relationship be? Example Uses Incorrect use of <aside> Closing Thoughts

HTML 5 This specification defines the 5th major version, second minor revision of the core language of the World Wide Web: the Hypertext Markup Language (HTML). In this version, new features continue to be introduced to help Web application authors, new elements continue to be introduced based on research into prevailing authoring practices, and special attention continues to be given to defining clear conformance criteria for user agents in an effort to improve interoperability. This section describes the status of this document at the time of its publication. Other documents may supersede this document. A list of current W3C publications and the latest revision of this technical report can be found in the W3C technical reports index at This document was published by the Web Platform Working Group as a W3C Recommendation for HTML 5.2 that would obsolete the HTML 5.1 Recommendation. This document was produced by a group operating under the W3C Patent Policy.

Second Life objects to become HTTP-aware - Massively While Second Life users wait with 'bated breath for the SLS 1.27 deployment that will sort out a large number of crippling group communications failures, there's an extra bonus lurking in the code. SLS1.27 will be adding an HTTP-in feature which will allow HTTP requests to be sent to Second Life objects. At present, Second Life objects can only 'dial out' to external Web-servers and services, but with few practical methods of communicating that external data and resources have changed, many object creators have had to settle for frequent polling of Web-services for data. The HTTP-in method, will allow external services to push data to in-world objects and receive simple responses, saving significant quantities of bandwidth and server resources. Documentation for the new communications subsystem is available, and the feature can already be trialled live on Aditi, the beta/preview grid.

Coding An HTML 5 Layout From Scratch - Smashing Coding HTML5 and CSS3 have just arrived (kinda), and with them a whole new battle for the ‘best markup’ trophy has begun. Truth to be told, all these technologies are mere tools waiting for a skilled developer to work on the right project. As developers we shouldn’t get into pointless discussions of which markup is the best. They all lead to nowhere. Rather, we must get a brand new ideology and modify our coding habits to keep the web accessible. While it is true HTML5 and CSS3 are both a work in progress and is going to stay that way for some time, there’s no reason not to start using it right now. So today we’re going to experiment a little with these new technologies. It’d be a good idea to have a read at some of these articles first: I’ll also assume you know the basics of HTML and CSS. Before we begin… Link There’s a couple of things you have to bear in mind before adventuring on the new markup boat. A word on Progressive Enhancement and Graceful Degradation Link 1. 2. <! A few highlights: <!

Coding A HTML 5 Layout From Scratch | How-To, Tutorials | Smashi Advertisement HTML5 and CSS3 have just arrived (kinda), and with them a whole new battle for the ‘best markup’ trophy has begun. Truth to be told, all these technologies are mere tools waiting for a skilled developer to work on the right project. As developers we shouldn’t get into pointless discussions of which markup is the best. They all lead to nowhere. While it is true HTML5 and CSS3 are both a work in progress and is going to stay that way for some time, there’s no reason not to start using it right now. So today we’re going to experiment a little with these new technologies. Use Graceful Degradation techniques and technologies to keep things in place for legacy browsers.Use Progressive Enhancement techniques and technologies to be up to date with the latest trends.Use HTML5 alongside a rising technology: Microformats.Have a clear vision of some of the most exciting new features HTML5 and CSS3 will bring. It’d be a good idea to have a read at some of these articles first: 1. 2. <! <!