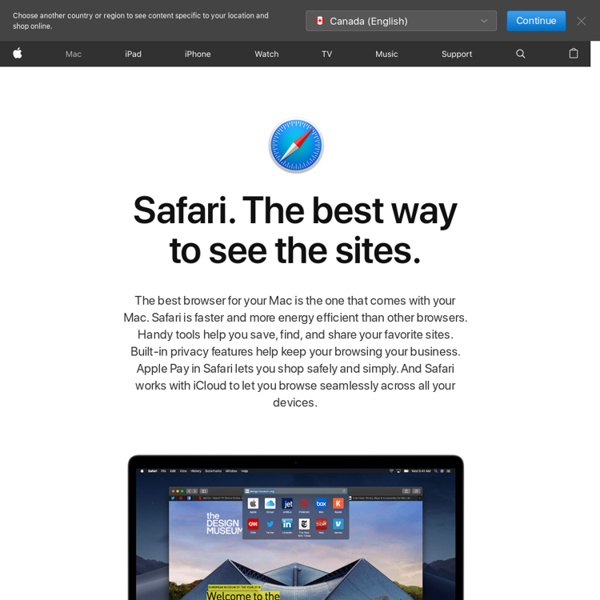 Shared Links is the best way to see what’s up on the web. When you’re in the mood to read something new, quirky, or cool, open Shared Links in the Safari Sidebar, where you can view links from people you follow on Twitter and LinkedIn. You can scroll seamlessly from one story to the next, no clicking required. So they’re quick and easy to read. Share anything you come across on the web without leaving Safari. Just click the Share button, then choose how you want to send it off. Safari has advanced power-saving technologies built in. Safari takes advantage of power-saving technologies such as App Nap, which puts background Safari tabs into a low-power state until you start using them again. Power-saving technologies let you browse longer compared with Chrome and Firefox.1 Memory management technologies help Safari — and the rest of your system — stay responsive.2 Safari Baseline Firefox 1.29x more memory usage Chrome 1.35x more memory usage 1 2 Third-party data and cookie blocking.

HTML5 Studio ⧉ Info WebGL Globe A WebGL sphere of news stories. HTML5 A vocabulary and associated APIs for HTML and XHTML W3C Working Draft 4 March 2010 This Version: Latest Published Version: Latest Editor's Draft: Previous Versions: Chrome Frame Google Chrome Frame is a free plug-in for Internet Explorer. Some advanced web apps use Google Chrome Frame to provide you with additional features and better performance. We are sorry. Google Chrome Frame is only available for Internet Explorer 6, 7, 8 and 9 on Windows 7 / Vista / XP SP2 or greater. Download Google Chrome Frame to: Speed up your web experience Sites that utilize Google Chrome Frame become more responsive. HTML5 in the browser: Canvas, video, audio, and graphics December 08, 2010 Follow @peterwayner The five characters HTML5 are now an established buzzword, found everywhere on the Web and often given top billing in slides, feature lists, and other places where terms du jour congregate. Nonprogrammers who must either manage or work with programmers are even beginning to pick up the term. Just two days ago, someone who can't manage a TV remote explained that he was sure his company's Web presence would be much better because they were using HTML5. The five characters are in reality just the name of a document that isn't even finished.

18 Reasons To Love HTML5 and Start Pinning in IE9: the Winners of Dev Unplugged When we launched Dev Unplugged on March 1st of this year, we knew what we were hoping for: amazing web experiences that pushed the limits of modern browsers, particularly in the genre of gaming and music. We set the bar extremely high and challenged developers to show everyone where they thought the web was going. It has been a daunting process working our way first to 40 finalists and now to 18 winners and runner-ups.

How HTML5 will change the Web Many folks who are just tuning into the HTML5 saga because of the battle between Adobe and Apple are surprised to learn that the push to create a fifth official version of the HTML specification began six years ago. And that's just the first half of the story because the latest implementations, while nice, are far from standards. The HTML5 demos from Apple, for instance, are impressive, but they only run well on Safari. HTML5 in the browser: Local data storage Of all the changes bundled in the HTML5 drafts, few are as radical or subversive as the options for storing data locally. From the very beginning, the Web browser was intended to be a client in the purest sense of the word. It would display information it downloaded from a distant server, and it would do everything the distant server would tell it to do. Programmers discovered the limitations to this fairly soon, and before long browsers started offering website developers the chance to leave a little piece of data behind. The creators tried giving this 4,096-byte text string a cute name, "cookie," but that didn't stop the controversy. Cookies became the focus as the greater public started to wonder just how the inscrutable gnomes at the central office were tracking their every move.

HTML 5 and CSS 3: The Techniques You’ll Soon Be Using - Nettuts+ In this tutorial, we are going to build a blog page using next-generation techniques from HTML 5 and CSS 3. The tutorial aims to demonstrate how we will be building websites when the specifications are finalized and the browser vendors have implemented them. If you already know HTML and CSS, it should be easy to follow along. HTML5 in the browser: HTML5 data communications From the beginning, Web users have had mixed feelings about the way their browser communicates. On one hand, the idea of a tightly controlled sandbox is appealing because it limits the damage a website may do to our personal data and to the Web as a whole. Without these controls, just clicking on a link could unleash viruses, worms, and worse. On the other hand, programmers have always complained about the browser's restrictions, pointing out the ways they limit the services that might be made available.

12 resources for getting a jump on HTML 5 Recently I’ve seen a considerable amount of press on blogs and such regarding HTML 5, “the 5th major revision of the core language of the World Wide Web” (W3C). I have virtually no experience (yet) with HTML 5, so as I jump on the bandwagon and begin familiarizing myself with it, I thought I’d share some of the resources I’m reading along the way. So far from what I’m learning, the consensus among several of these articles seems to be this: The world isn’t ready for HTML 5 at large just yet, but we can begin preparing for it by using common, semantic selector names (header, nav, section, etc.) — or even new attribute names — derived from HTML 5 within our HTML 4.01 or XHTML 1.x documents.

HTML5 in the Web browser: HTML5 forms March 09, 2011 Follow @peterwayner The changes and enhancements to the form tags are some of the most extensive amendments to the HTML5 standard, offering a wide variety of options that once required add-on libraries and a fair amount of tweaking. All of the hard work that went into building self-checking widgets and the libraries that ensure the data is of the correct format is now being poured into the browser itself. The libraries won't be necessary -- in theory -- because the work will be done seamlessly by all browsers that follow the standard.