The HTML5 test - How well does your browser support HTML5? 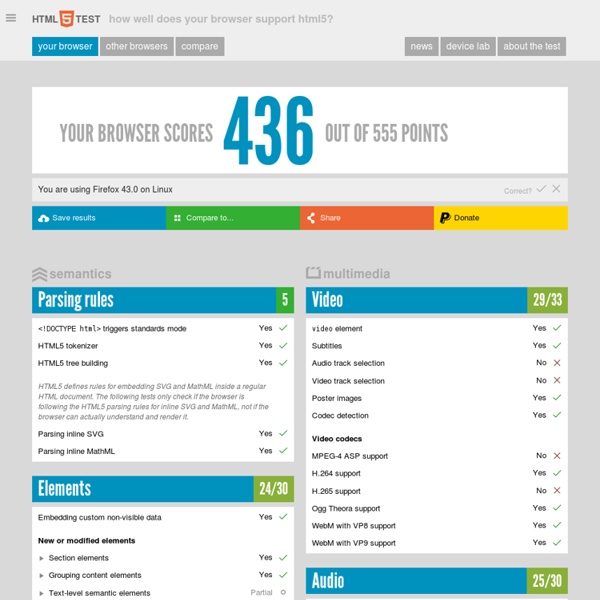 The HTML5 test score is an indication of how well your browser supports the upcoming HTML5 standard and related specifications. Even though the specification isn't finalized yet, many features are already supported and all major browser manufacturers are making sure their browser is ready for the future. Find out which parts of HTML5 are already supported by your browser today and compare the results with other browsers. The HTML5 test does not try to test all of the new features offered by HTML5, nor does it try to test the functionality of each feature it does detect. Despite these shortcomings we hope that by quantifying the level of support users and web developers will get an idea of how hard the browser manufacturers work on improving their browsers and the web as a development platform. The score is calculated by testing for the many new features of HTML5.

HTML 5 - What's New in HTML 5 HTML 5 adds a lot of new features to the HTML specification. And what's even better, there is already some limited browser support for these new features. If there is a feature you're interested in, watch the WHATWG Wiki Implementations page for information on browsers that support various parts of the specification.

20+ Useful CSS3 and HTML5 Frameworks, Tools and Templates I hope you have heard a little about CSS3 and HTML5. And I’m sure you’ve used at least one of the cool features they offer. But now it is time to use them at their full (or almost full) power. You may be asking yourself “It is time to change? HTML 5.1 Nightly This section describes the status of this document at the time of its publication. Other documents may supersede this document. A list of current W3C publications and the latest revision of this technical report can be found in the W3C technical reports index at

jQuery NiceScroll plugin - scrolling for desktop, mobile and touch devices In number theory, Fermat's Last Theorem states that no three positive integers a, b, and c can satisfy the equation an + bn = cn for any integer value of n greater than two. This theorem was first conjectured by Pierre de Fermat in 1637, famously in the margin of a copy of Arithmetica where he claimed he had a proof that was too large to fit in the margin. No successful proof was published until 1995 despite the efforts of countless mathematicians during the 358 intervening years. The unsolved problem stimulated the development of algebraic number theory in the 19th century and the proof of the modularity theorem in the 20th. It is among the most famous theorems in the history of mathematics and prior to its 1995 proof was in the Guinness Book of World Records for "most difficult math problems". Contents [hide]

Reading local files in JavaScript Introduction HTML5 finally provides a standard way to interact with local files, via the File API specification. As example of its capabilities, the File API could be used to create a thumbnail preview of images as they're being sent to the server, or allow an app to save a file reference while the user is offline. What's New in HTML5 Forms: The Datalist Control As mentioned in my article entitled What's New in HTML5 Forms: New Email, URL, and Telephone Input Types, the HTML5 spec introduces a number of updated form elements that promise to make web developers' lives easier. Although browser support is still far from universal, there is little downside to using the new form controls--at least as far as input elements go. The topic of today's article, the Datalist control, is a little more complex than a simple input, and thus requires more care if you decide to use it.

8 Cheat Sheet Wallpapers for Designers and Developers Web designers and developers have a lot to remember, from keyboard shortcuts to function names. That’s why it’s handy to have cheat sheets near by for a quick reference. Most people like to print out there cheat sheets on paper and have them sitting on their desk, but another convenient place for a cheat sheet is right on your computers desktop in the form of a wallpaper. Here we’ve rounded up a few very useful cheat sheets for web designers and developers that can be used as desktop wallpapers. HTML5 differences from HTML4 Abstract HTML is the core language of the World Wide Web. The W3C publishes HTML5 and HTML5.1. The WHATWG publishes HTML, which is a rough superset of W3C HTML5.1.