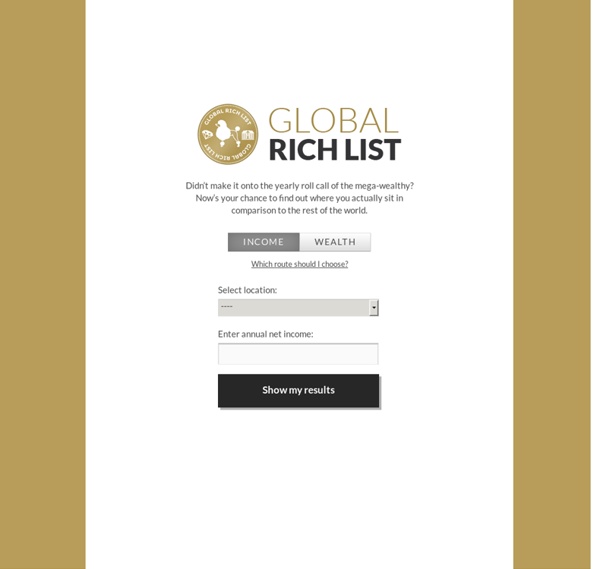 Binary - it's digitalicious! How binary works: The binary number system (aka base 2) represents values using two symbols, typically 0 and 1. Computers call these bits. A bit is either off (0) or on (1). BREAKFAST FASHION In Japan, the land of eye widening surgery and belly button removal, bagelheads have been a part of the body modification scene for years. Usually young urban clubgoers, bagelheads sport abnormally swollen foreheads, created by a technician inserting 400 grams of saline solution directly into the forehead, and creating an indentation with their thumb to make the bagel shape. The technique was reportedly pioneered by Canadian photographer Jerome Abramovitch, who started saline infusions at an extreme body modification conference in 1999.

The 100 Best, Most Interesting Blogs and Websites of 2012 (Categorized) Editor’s note: 2015’s list of the best, most interesting websites has arrived! I don’t know about you, but I’m constantly running into so many cool websites I want to remember or recommend to people but I don’t always have time to make a note of them, add them to Evernote, bookmark them in Delicious, etc. So this is a good example of a post I created as a personal (and completely unscientific) resource that other people will probably benefit from as well. The Tunnel People That Live Under The Streets Of America Did you know that there are thousands upon thousands of homeless people that are living underground beneath the streets of major U.S. cities? It is happening in Las Vegas, it is happening in New York City and it is even happening in Kansas City. As the economy crumbles, poverty in the United States is absolutely exploding and so is homelessness.

Making Connections: Why is the news so bad? What can progressives do to fix it? Download Charts How do the progressive and conservative media landscapes compare? Download pdfs of our infographics that map out the current systems. In March, conservative uber-strategist Grover Norquist of Americans for Tax Reform launched the Media Freedom Project. This new group is the latest entry in a three-decade-long contest between the progressives who want to protect and extend First Amendment rights to freedom of speech and those on the right who view unfettered expression as a danger to the established corporate order.

Minimal Boolean Formulas 28. That's the minimum number of AND or OR operators you need in order to write any Boolean function of five variables. Alex Healy and I computed that in April 2010. Until then, I believe no one had ever known that little fact. This post describes how we computed it and how we almost got scooped by Knuth's Volume 4A which considers the problem for AND, OR, and XOR. A Naive Brute Force Approach

Forget Peak Oil, We're At Peak Everything Peak oil is the concept that new discoveries of commercially exploitable oil resources do not keep pace with growing demand. By extrapolating the data, you can estimate when we will run out of it for all practical purposes. There are a lot of disagreements about whether we have reached peak oil or when the downhill slope will hit a point that brings a significant percentage of our vehicles to a grinding halt, but the concept has made scientists and policy makers ask the question: What other critical resources may be peaking? Weekly Intelligence Notes WINs are commentaries on intelligence-related news items. WINs are produced by Editor Roy Jonkers for AFIO members and subscribers. WINs are protected by copyright laws and may not be disseminated without consent by the Editor. WINs are now sent to over 1,040 AFIO members and subscribers.