Welcome to the microformats wiki! 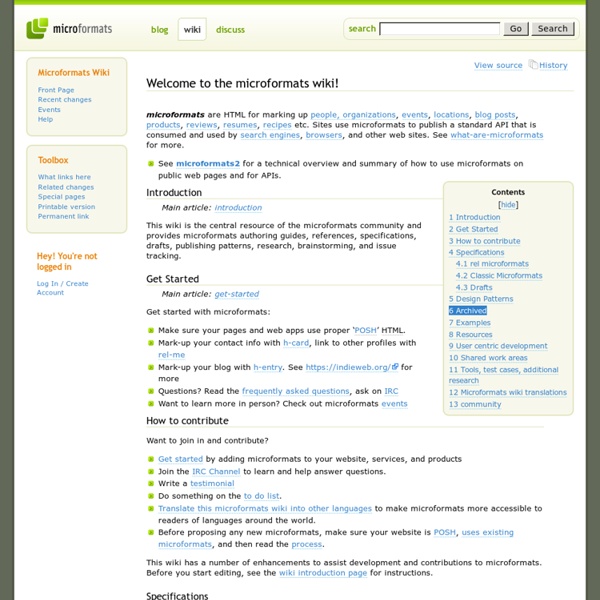 Make Your Products 'POP!' On Social Media & SERPs with Microdata! Get More Visits from Social Media when Someone Shares Your Products The biggest validation for your store is when a customer shares your products on social media. What they’re saying is: “Hey, I had a great experience buying from these guys. I want you guys to check it out as well.” However, most online stores end up wasting these opportunities. Their social media links fail to stand out in the blizzard of information that social feeds throw at an average user, everyday.

Microdata You are here: Home Dive Into HTML5 Diving In There are over 100 elements in HTML5. XMDP: Introduction and Format Description Author(s) Tantek Çelik Introduction HTML4 has several mechanisms for describing meta data, the most well known being the <meta> element. Meaningful Markup: POSH and Beyond Back in 1998, I was working as a Marketing Coordinator for an accounting firm. I was responsible for designing and writing content for our client newsletters, amongst a myriad of other print-focused activities. One day, my boss asked me to take a look at our corporate web site and rework the content. As I went through the editing and re-writing process, I became increasingly interested in what was behind the scenes on the site. A few searches on the internet and I learned of something called HTML.

RDF Schema 1.1 Abstract RDF Schema provides a data-modelling vocabulary for RDF data. RDF Schema is an extension of the basic RDF vocabulary. Status of This Document Accessible Rich Internet Applications (WAI-ARIA) 1.0 An element whose implicit native role semantics will not be mapped to the accessibility API. The intended use is when an element is used to change the look of the page but does not have all the functional, interactive, or structural relevance implied by the element type, or may be used to provide for an accessible fallback in older browsers that do not support WAI-ARIA. Example use cases: An element whose content is completely presentational (like a spacer image, decorative graphic, or clearing element);An image that is in a container with the img role and where the full text alternative is available and is marked up with aria-labelledby and (if needed) aria-describedby;An element used as an additional markup "hook" for CSS; orA layout table and/or any of its associated rows, cells, etc. For example, according to an accessibility API, the following markup elements would appear to have identical role semantics (no role) and identical content.

About microdata - Webmaster Tools Help The HTML5 microdata specification is a way to label content to describe a specific type of information—for example, reviews, person information, or events. Each information type describes a specific type of item, such as a person, and event, or a review. For example, an event has the properties venue, starting time, name, and category. Microdata uses simple attributes in HTML tags (often <span> or <div>) to assign brief and descriptive names to items and properties. a blog about microformats and “data at the edges” : Semantics in HTML part I - Traditional HTML Semantics This is the first in a series of articles which aims to survey the issue of semantics in current web design and development (for the HTML based web, not the “Semantic Web”). The goals are to further understand the way in which semantics are currently added to today’s web, either “formally” (through the use of “semantic” HTML, or microformats) or less formally, though the use of commonly used design patterns. In this article, I focus a little on precisely what the term “semantics” means, and then turn my attention to the nature of the “built in” semantics in HTML.

Accessible Rich Internet Applications (WAI-ARIA) 1.0 This version: Latest version: Previous version: Editors: microdata microdata is part of WHATWG's HTML living specification that provides another way to embed microformats and poshformats vocabularies, and has been superseded by microformats2. microdata was explicitly dropped by the W3C (and therefore not part of W3C HTML5) due to a lack of interest by anyone to edit the spec and keep it up to date.[1] summary Using microformats - MDC Microformats allow web sites to provide semantic data to the browser in order to make it possible to present summaries of the information on a page without having to know how to parse the document itself. Firefox 3 implements a global Microformats object that provides access to microformats. This object and its API make finding and reading microformats easy to do.

Oomph: A Microformats Toolkit - Lab - MIX Online Go Microformats! The crew here at Mix Online believe in Microformats. But don't just believe us: look at the adoption of Microformats in the wild. There are over a billion web pages with content formatted to the hCard specification and nearly 100 million formatted to the hCalendar specification. Top web properties including Yahoo, LinkedIn, Eventful, Twitter and YouTube are using Microformats. MDR - European Legislation Identifier (ELI) - Main page MDR > European Legislation Identifier (ELI) Given the disparities between legal data at regional, national and European Union levels, it is necessary to ensure that citizens have easy and efficient access to information on national and European legislation. For this reason the Council conclusions invite the introduction of a European Legislation Identifier (ELI) on a voluntary basis. ELI enables simple and fast access to this information by providing a unique identifier which is recognizable, readable and understandable by both humans and computers: "The process of cooperation within the European Union has increased the need to identify and exchange legal information originating from regional and national authorities at the European level. [...]