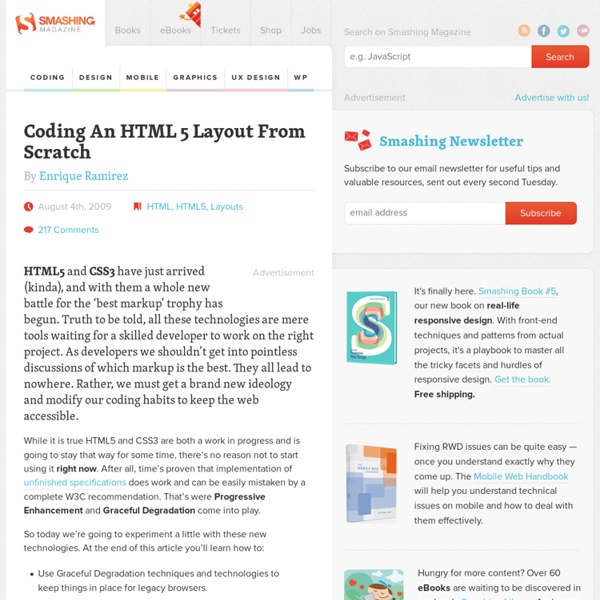 Advertisement HTML5 and CSS3 have just arrived (kinda), and with them a whole new battle for the ‘best markup’ trophy has begun. Truth to be told, all these technologies are mere tools waiting for a skilled developer to work on the right project. As developers we shouldn’t get into pointless discussions of which markup is the best. They all lead to nowhere. Rather, we must get a brand new ideology and modify our coding habits to keep the web accessible. While it is true HTML5 and CSS3 are both a work in progress and is going to stay that way for some time, there’s no reason not to start using it right now. So today we’re going to experiment a little with these new technologies. It’d be a good idea to have a read at some of these articles first: I’ll also assume you know the basics of HTML and CSS. Before we begin… There’s a couple of things you have to bear in mind before adventuring on the new markup boat. A word on Progressive Enhancement and Graceful Degradation 1. 2. <! A few highlights:

CSS Techniques I Wish I Knew When I Started Designing Websites - Dec 18 2009 By Tim Wright and TJ Kelly CSS is the best thing to happen to the web since Tim Berners-Lee. It’s simple, powerful, and easy to use. Touch The Future: Create An Elegant Website With HTML 5 And CSS3 I’m sure that who chooses to work as web designer makes a choice of heart, a choice of love. He/she decides to bet any given day on his creativity and his ability of producing an idea and of making it tangible, visible and perceptible for all. These crazy men have my respect. But, also when the creative side is very important for a work, there exists a logical (and technical) part in all creative process. There are some moments and situations in which the creative mind needs an analytical method to achieve the objective, that is, for us, the creation of a well-done website.

HTML5 Presentation In March 1936, an unusual confluence of forces occurred in Santa Clara County. A long cold winter delayed the blossoming of the millions of cherry, apricot, peach, and prune plum trees covering hundreds of square miles of the Valley floor. Then, unlike many years, the rains that followed were light and too early to knock the blossoms from their branches. Coding a CSS3 &amp; HTML5 One-Page Website Template – Tutorialzine Web development is an area in which you have to keep up with the latest technologies and techniques, so that you are at the top of your game. And no wonder - this is an area which changes with an amazing pace. What is the standard now will be obsolete in just a couple of years. But changes do not come from nowhere.

Learn CSS Positioning in Ten Steps: position static relative abs 1. position:static The default positioning for all elements is position:static, which means the element is not positioned and occurs where it normally would in the document. Normally you wouldn't specify this unless you needed to override a positioning that had been previously set. 2. position:relative If you specify position:relative, then you can use top or bottom, and left or right to move the element relative to where it would normally occur in the document.

HTML 5 <ruby> Tag The HTML <ruby> tag is used for specifying Ruby annotations, which is used in East Asian typography. Ruby (also spelt rubi) characters are small, annotative glosses that can be placed above or to the right of a Chinese character when writing logographic languages such as Chinese or Japanese to show the pronunciation. Ruby annotations, are usually used as a pronunciation guide for relatively obscure characters. The <ruby> tag was introduced in HTML 5. Example 10 examples of futuristic CSS3 techniques Pure CSS speech bubbles In a design, bubbles can be great to illustrate a quote. In this article, talented designer Nicolas Gallagher will show you what he built with CSS3: Text bubbles, with no Javascript or images.

CSS in Depth: Floats and Positions Last week, in the first of our CSS In Depth post, we discussed the difference between paddings and margins, and what the box model is. This week we’ll be discussing positions and floats as well as what the differences are and when it’s best to use them. Both floats and positions deal with the relationship of elements between each other.

22 Excellent HTML5 Tutorials HTML5 is giving web designers and developers new capabilities in the world of web development. With the presence of HTML5, web application development will be more fun. HTML5 introduces a number of new elements and attributes that reflect typical usage on modern websites. Some of them are semantic replacements for common uses of generic block (<div>) and inline (<span>) elements, for example <nav> (website navigation block) and <footer> (usually referring to bottom of web page or to last lines of html code). HTML 5 features like Canvas, local storage, and Web Workers let us do more in the browser than ever before. Even though HTML5 is not fully supported in major browsers, there are those that are pushing forward and experimenting with its new features.

HTML5 Website Layout Tutorials and Inspiration HTML5 Website Layout Tutorials and Inspiration Posted by Vikas Ghodke on March 21st in Tutorials. In webdevelopment you have to be in touch with latest technologies, if you really want to be on top. Now HTML5 is new its the fundamental language for web, so we all need to learn it thats why we have collected some tutorials on coding a layout with HTML5 and CSS3. We will come up with HTML5 Layout tutorial in upcoming days, Subscribe to our RSS feed to be in touch. Don’t hesitate in trying testking 642-631 dumps, E20-001 dumps, 642-642 exam guide, 642-654 dumps, and 640-816 certification material.

Have a Field Day with HTML5 Forms Forms are usually seen as that obnoxious thing we have to markup and style. I respectfully disagree: forms (on a par with tables) are the most exciting thing we have to work with. Here we’re going to take a look at how to style a beautiful HTML5 form using some advanced CSS and latest CSS3 techniques. I promise you will want to style your own forms after you’ve read this article. Here’s what we’ll be creating:

50 Excellent Tutorials for Web Development Using CSS3 In this modern web world we offering CSS3 techniques in these really useful tutorials with many exciting features and latest practice, after an detail research session about CSS3 (Cascade Style Sheet) make an roundup where amazing ideas about Web Developments. CSS3 have more exciting features which are most compatible for cross browser usability as we using famous internet browsers: Internet Explorer 7 & 8, Firefox, Safari and chrome, they all very supporting of new CSS3 properties. In this emerging roundup we emphasis on some latest techniques which were not supporting before in older versions, but now in this latest language techniques CSS3 you can follow all of these following techniques: text-shadow, rounded box, box sizing, opacity handlers, multiple backgrounds, border images and also supporting for multi column web layouts.

CSS Specificity And Inheritance - Smashing Magazine - StumbleUpo Advertisement CSS’ barrier to entry is extremely low, mainly due to the nature of its syntax. Being clear and easy to understand, the syntax makes sense even to the inexperienced Web designer. It’s so simple, in fact, that you could style a simple CSS-based website within a few hours of learning it. But this apparent simplicity is deceitful.

15 Useful HTML5 Tutorials and Cheat Sheets 1911 shares 8 Must-have Cheat Sheets for Web Designers and Developers As a web designer or developer, it’s nearly impossible to remember multiple programming languages, frameworks, and keyboard shortcuts to various applications. This is where cheat sheets can be a life saver. Most cheat sheets are designed to be printer friendly, so you can have them laying around on your desk as quick reference cards. So…