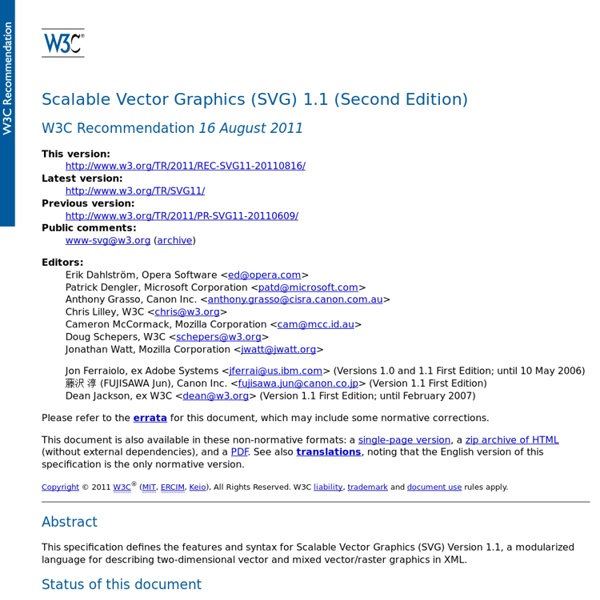 WOFF File Format 1.0 1. Introduction This document specifies a simple compressed file format for fonts, designed primarily for use on the Web and known as WOFF (Web Open Font Format). Despite this name, WOFF should be regarded as a container format or "wrapper" for font data in already-existing formats rather than an actual font format in its own right. The WOFF format is a container for the table-based sfnt structure used in e.g. The structure and contents of decoded font data exactly match those of a well-formed input font file. Notational Conventions The all-uppercase key words "MUST", "MUST NOT", "REQUIRED", "SHALL", "SHALL NOT", "SHOULD", "SHOULD NOT", "RECOMMENDED", "MAY", and "OPTIONAL" in this document are to be interpreted as described in RFC 2119 [RFC-2119]. This document includes sections of text that are called out as "Notes" and set off from the main text of the specification. 2. The primary purpose of the WOFF format is to package fonts linked to Web documents by means of CSS @font-face rules.

XMLHttpRequest Level 1 Abstract The XMLHttpRequest specification defines an API that provides scripted client functionality for transferring data between a client and a server. Status of this Document This section describes the status of this document at the time of its publication. This document is published as a snapshot of the XMLHttpRequest Living Specification. If you wish to make comments regarding this document in a manner that is tracked by the W3C, please submit them via using our public bug database, or please send comments to public-webapps@w3.org (archived) with [XHR] at the start of the subject line. The W3C Web Applications Working Group is the W3C working group responsible for this specification's progress along the W3C Recommendation track. Publication as a Working Draft does not imply endorsement by the W3C Membership. Work on this specification is also done at the WHATWG. This document was produced by a group operating under the 5 February 2004 W3C Patent Policy. Table of Contents 1 Introduction

Geolocation API Specification Abstract This specification defines an API that provides scripted access to geographical location information associated with the hosting device. Status of This Document This section describes the status of this document at the time of its publication. Other documents may supersede this document. This document has been reviewed by W3C Members, by software developers, and by other W3C groups and interested parties, and is endorsed by the Director as a W3C Recommendation. By publishing this Recommendation, W3C expects that the functionality specified in this Geolocation API Recommendation will not be affected by changes to HTML5 or Web IDL as those specifications proceed to Recommendation. This document incorporates minor changes made against the Proposed Recommendation of 10 May 2012. Comments on the document should be sent to the Working Group's public mailing list public-geolocation@w3.org (subscribe, archives). Table of Contents 1 Conformance requirements 2 Introduction 3 Scope Geolocation The