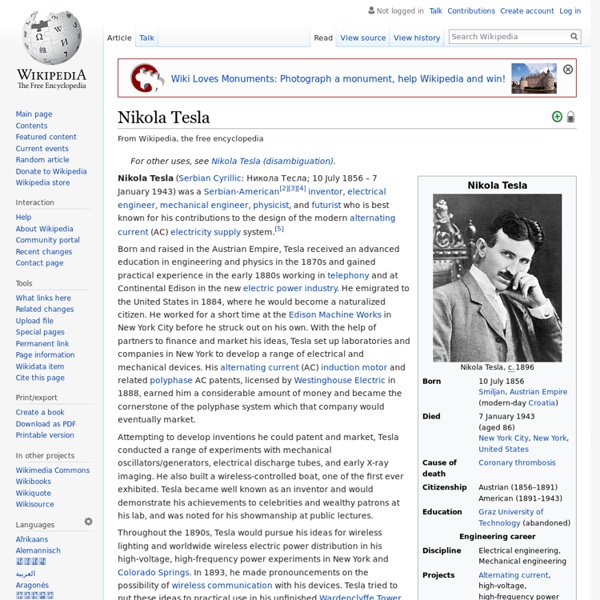 Nikola Tesla (Serbian Cyrillic: Никола Тесла; 10 July 1856 – 7 January 1943) was a Serbian-American[3][4] inventor, electrical engineer, mechanical engineer, physicist, and futurist who is best known for his contributions to the design of the modern alternating current (AC) electricity supply system.[5] Born and raised in the Austrian Empire, Tesla received an advanced education in engineering and physics in the 1870s and gained practical experience in the early 1880s working in telephony and at Continental Edison in the new electric power industry. He emigrated to the United States in 1884, where he would become a naturalized citizen. He worked for a short time at the Edison Machine Works in New York City before he struck out on his own. With the help of partners to finance and market his ideas, Tesla set up laboratories and companies in New York to develop a range of electrical and mechanical devices. Early years Tesla's baptismal record, 28 June 1856 Working at Edison A move to the US

The Secret of Nikola Tesla Movie Interesting The Secret of Nikola Tesla (Serbo-Croatian: Tajna Nikole Tesle), is a 1980 Yugoslav biographical film which details events in the life of the Serbian-American engineer and inventor Nikola Tesla (1856–1943), portrayed by Serbian actor Petar Božović. Tesla grew up in the Austro-Hungarian Empire), studied engineering and physics, and moved to New York in 1884. He became an American citizen in 1891 and is known for his contributions to electrical engineering.[1] Tesla electric car American automotive and energy company Tesla, Inc. is an American electric vehicle and clean energy company based in Palo Alto, California. Tesla's current products include electric cars, battery energy storage from home to grid-scale, solar panels and solar roof tiles, as well as other related products and services. In 2020, Tesla had the highest sales in the plug-in and battery electric passenger car segments, capturing 16% of the plug-in market (which includes plug-in hybrids) and 23% of the battery-electric (purely electric) market. Through its subsidiary Tesla Energy, the company develops and is a major installer of solar photovoltaic energy generation systems in the United States. Tesla Energy is also one of the largest global suppliers of battery energy storage systems, with 3 GWh of battery storage supplied in 2020.

Energy By Tesla - Create Your Own Tesla Power System For over 90 years “Big Energy” has successfully convinced the US Government to smother and bury the biggest invention of our time… They tried to keep it hidden from you forever. Why? Because this one, simlpe invention can produce all the natural, clean ELECTRICITY! Walter Russell Walter Bowman Russell (May 19, 1871 – May 19, 1963) was an American polymath known[1] for his achievements as a painter, sculptor, author and builder and less well known as a natural philosopher and for his unified theory in physics and cosmogony.[2][3] He posited that the universe was founded on a unifying principle of rhythmic balanced interchange. This physical theory, laid out primarily in his books The Secret of Light (1947) and The Message of the Divine Iliad (1948–49), has not been accepted by mainstream scientists.[4] Russell asserted that this was mainly due to a difference in the assumptions made about the existence of mind and matter; Russell assumes the existence of mind as cause while he believes that scientists in general assume the existence of mind as effect.[5] Russell was also proficient in philosophy, music, ice skating, and was a professor at the institution he founded, the University of Science and Philosophy (USP). Biography[edit] Legacy[edit] Nuclear reactors[edit]

Tesla Coils: Unleash the Aether Nikola Tesla's most significant contribution was not AC power, radio, or the induction motor, but what we call the Tesla Coil - a tool which allows for the power of the aether to be unleashed and harnessed. Now being launched through an open source project. by Hank MillsPure Energy Systems News The inventions of Nikola Tesla are numerous. He invented radio, teleautomatics (remote control technology), poly-phase alternating current, the induction motor, and many other innovations that established the foundation for our modern civilization.

Cosmogony Cosmogony (or cosmogeny) is any model concerning the coming-into-existence (i.e. origin) of either the cosmos (i.e. universe), or the so-called reality of sentient beings.[1][2] Developing a complete theoretical model has implications in both the philosophy of science and epistemology. Etymology[edit] The word comes from the Koine Greek κοσμογονία (from κόσμος "cosmos, the world") and the root of γί(γ)νομαι / γέγονα ("come into a new state of being").[3] In astronomy, cosmogony refers to the study of the origin of particular astrophysical objects or systems, and is most commonly used in reference to the origin of the universe, the solar system, or the earth-moon system.[1][2] Overview[edit] The Big Bang theory is the prevailing cosmological model of the early development of the universe.[4] The most commonly held view is that the universe was once a gravitational singularity, which expanded extremely rapidly from its hot and dense state.

Tesla Coil Design, Construction and Operation Guide The by Kevin Wilson In conjunction with TeslaMap - Tesla Coil Design Program © 2009-2015 by Kevin Wilson Recovered The Ten Inventions of Nikola Tesla Which Changed The W Nikola Tesla-Did You Know? “Tesla was considered an eccentric man who talked of death rays that could destroy 10,000 airplanes at a distance of 250 miles. However, Tesla devised the AC (alternating current) system that we use in our homes today. AC offered great advantages over the rival DC system. By using Tesla’s transformers, AC voltages could be stepped up (or down) and transmitted over long distances through thin wires.