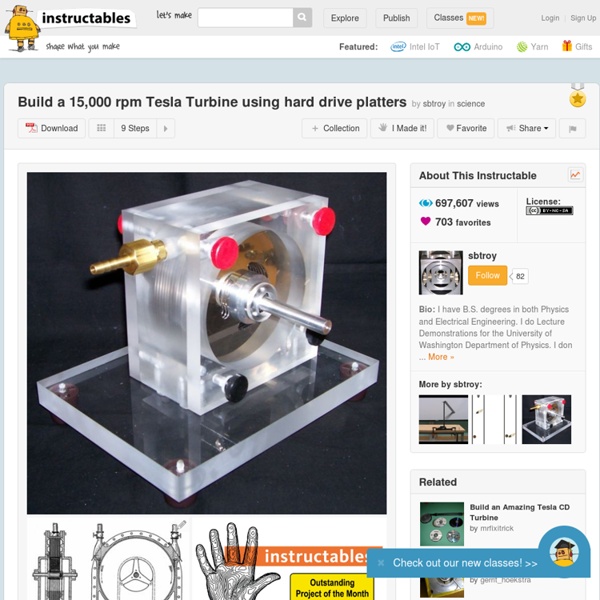 Here's a project that uses some of those dead hard drives you've got lying around. In the Tesla Turbine, air, steam, oil, or any other fluid is injected at the edge of a series of smooth parallel disks. The fluid spirals inwards and is exhausted through ventilation ports near the center of the disks. A regular blade turbine operates by transferring kinetic energy from the moving fluid to the turbine fan blades. In the Tesla Turbine, the kinetic energy transfer to the edges of the thin platters is very small. Instead, it uses the boundary layer effect, i.e. adhesion between the moving fluid and the rigid disk. To build a turbine like this, you need some dead hard drives, some stock material (aluminum, acrylic), a milling machine with a rotary table, and a lathe with a 4 jaw chuck. Wikipedia has a good review article ( as well as articles about I run my turbine on compressed air (40 psi), and it easily reaches speeds of 10-15,000 rpm.

How I built an electricity producing Solar Panel Several years ago I bought some remote property in Arizona. I am an astronomer and wanted a place to practice my hobby far away from the sky-wrecking light pollution found near cities of any real size. In my attempt to escape city slicker yuppies (you know the kind, the ones that like to blab loudly on their cell phone while they work on some business administration degree in a cyber cafe somewhere in Trendyland.) and their light pollution, I found a great piece of remote property. The problem is, it's so remote that there is no electric service available. I built a wind turbine to provide some power on the remote property. Here is a video of the solar panel set up and in use on my remote, off-grid property. Let me state up front that I probably won't be able to help you out much if you decide to build your own solar panel(s). So what is a solar panel anyway? I started out the way I start every project, by Googling for information on home-built solar panels. seller. Oops!

Tesla turbines for highschool students Here are some photos of some Tesla Turbines my Highschool Engineering students created as part of their studies into mechanisms and power transfer. Their brief was to investigate experimental power generation systems and create a prototype using available materials. I have provided the Task Overview below. Once the turbines where complete we tested their RPM and efficiency using a car timing light, changed and improved parts such as bearings etc and retested to see improvements in efficiency. Task Overview (scenario) Global - Tech Engineering are a socially conscious Engineering firm. The system must have the following considerations: high efficiency. made from available, cost efficient materials (preferably recycled or low impact materials). environmentally sound (no harmful by-products or toxic materials). small – scale or easily disassembled. be able to be mass produced in a standard workshop.

SytiNet - Le Blog How I built an electricity producing wind turbine Several years ago I bought some remote property in Arizona. I am an astronomer and wanted a place to practice my hobby far away from the sky-wrecking light pollution found near cities of any real size. I found a great piece of property. One thing I noticed right away about my property is that most of the time, the wind is blowing. Let me state up front that I probably won't be able to help you out much if you decide to build your own wind turbine. Since no one seems to be reading the FAQ, I will answer the No. 1 question I get many, many times a day right here up front. Update: Here is a video of the wind turbine in operation. Update: Here is a video of me assembling and setting up the wind turbine on my remote off-grid property. I started the process of designing my wind turbine by Googling for information on home-built wind turbines. A generator Blades A mounting that keeps it turned into the wind A tower to get it up into the wind Batteries and an electronic control system . Finally!

Tesla turbine Tesla turbine The Tesla turbine is a bladeless centripetal flow turbine patented by Nikola Tesla in 1913. It is referred to as a bladeless turbine because it uses the boundary layer effect and not a fluid impinging upon the blades as in a conventional turbine. The Tesla turbine is also known as the boundary layer turbine, cohesion-type turbine, and Prandtl layer turbine (after Ludwig Prandtl). Bioengineering researchers have referred to it as a multiple disk centrifugal pump.[1][2] One of Tesla’s desires for implementation of this turbine was for geothermal power, which was described in "Our Future Motive Power".[3] Description[edit] View of Tesla turbine "bladeless" design Tesla wrote, "This turbine is an efficient self-starting prime mover which may be operated as a steam or mixed fluid turbine at will, without changes in construction and is on this account very convenient. This turbine can also be successfully applied to condensing plants operating with high vacuum. Pump[edit] Tesla Other

Violente répression contre les manifestations anti-mondialisation Violente répression contre les manifestations anti-mondialisation(communiqué des associations canadiennes CLAC et CASA) Policiers anti-émeutes pendant le "Sommet des Amériques", à Québec en Avril 2001(images: Attac) Eco Homes from the Earth: 7 Ways to DIY Wouldn’t it be nice to own your own green dream home, made with recycled and natural materials and packed with custom features? Whether you’re an experienced builder or have never picked up a power tool in your life, you can build a natural eco-friendly home with user-friendly, low-cost materials like cob, cordwood, straw and the dirt and wood from your own land. These 7 natural building techniques produce beautiful homes with a small ecological footprint and tons of personality. Earthships and Hobbit Houses (images via dominicspics, ECOnscious, Earthship Biotecture) [youtube=L9jdIm7grCY] They seem to be a living part of the very earth itself, often with nothing but a façade and some windows to betray the presence of a home in the hillside. (images via: simondale.net) Among the most famous examples of a ‘hobbit house’ is “A Low Impact Woodland Home”, self-built in Wales for about 1000-1500 man-hours (over four months) and £3000. Cob (images via: ziggy fresh) [youtube=F0KDp00n4fs] Cordwood

Student invention lets Guatemalans pump water on the go University of Sheffield student Jon Leary was required to “make something useful out of rubbish” as part of his dissertation. What he ended up doing was transforming lives. As part of his studies as a Mechanical Engineering major, Leary spent four months in Guatemala. There, he introduced the locals to his bicibomba movil, a mobile bicycle-powered water pump. View all Leary developed the system while still in the UK. “The inspiration came from regular pannier racks that are used on touring bikes to carry things over the back wheel of a bike” Leary told us. The bicibomba movil was introduced with the help of Maya Pedal, a local organization that champions pedal-powered technology in the region. The mobile aspect of Leary’s invention, however, makes it attractive to farmers. Jon’s device can reportedly be made quite easily, using standard tools along with old bikes, bits of metal, and scrapped electric centrifugal water pumps.

DIY Solar Still How To Make Your Own Distilled Water Make your own distilled water from stream or lake water, salt water, or even brackish, dirty water, using these DIY Solar Still Plans. With just a few basic building materials, a sheet of glass and some sunshine, you can purify your own water at no cost and with minimal effort. Distilled water is not just for drinking, and it’s always worth keeping a few gallons of it on hand. • Always refill the lead-acid batteries used for solar energy systems or automobiles with distilled water • Water delicate plants like orchids with distilled water; minerals and additives like fluoride or chlorine that are present in most tap water can harm plants • Distilled water mixed with antifreeze is recommended for car radiators, as it’s less corrosive • Steam irons become clogged with mineral deposits unless you use distilled water The box is built from 3/4 ” BC-grade plywood, painted black on the inside to absorb heat. How to Make a Solar Still 1. 2. 3. 4. 5. 6. 7. 8. 9.

Build an Amazing Tesla CD Turbine Build a real working turbine from recycled CD's! This Tesla CD Turbine is based on the Tesla turbine, which was invented by Nikola Tesla in the early 1900's. Tesla's pumps and motors were unique in that they only used discs, and took advantage of the boundary layer effect. His smallest designs were over 100 horsepower. This Instructable is an introduction to my recently developed Tesla CD Turbine, which is made from CD's, CD spindle, pipe fittings and glue. The basic model Tesla CD Turbine shows how the boundary layer idea works to deliver power. The advanced model has many cool features, such as the use of neodymium magnets to separate the CD's with the correct gap and a Magnetic Coupler to attach implements, and much more. My next CD Turbine Instructable shows how to make a Magnetic Disc Pack and Magnetic Coupler for more advanced CD Turbine experimentation. However, please be forewarned that this turbine on air pressure is not really a kid's toy or particularly safe to operate.

Laying out the Building Lines For Your Natural Building « Natural Living School Site Preparation After you select your site, and have a plan and design for your building, then you are ready for site preparation. The first thing to do is make sure you clear the site where the building will be located. This means removal of trees, shrubs, large rocks, stumps, or anything that may be in the way of the construction. Laying Out The Building Lines For the purpose of keeping things simple, lets look at two options. For a round structure; First, pound a stake deep in the ground where you want the center of your building to be. The trench for a round Sauna we worked on in Aurora Or. Then remove the top soil and set aside for future use. For the thickness of your inside wall, measure the size of your straw bales first. For a Rectangular Buildings; First you need to make sure that your building lines are squared. Batter Board Diagram for your Natural Building Water levels are easy to use and inexpensive to buy. Squaring Your Natural Building with Batter Boards Like this: