Training like Tesla: An Experiment of the Mind - Zach Tratar. I’m going to undergo an experiment with which I am the test subject. 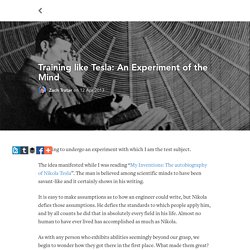 The idea manifested while I was reading “My Inventions: The autobiography of Nikola Tesla”. The man is believed among scientific minds to have been savant-like and it certainly shows in his writing. It is easy to make assumptions as to how an engineer could write, but Nikola defies those assumptions. He defies the standards to which people apply him, and by all counts he did that in absolutely every field in his life. Almost no human to have ever lived has accomplished as much as Nikola. As with any person who exhibits abilities seemingly beyond our grasp, we begin to wonder how they got there in the first place.

The power of imagination And here, at least in the reference of Nikola, we have data. What made Nikola great was his precise and grandiose imagination. If you’re an engineer or “builder” you’re probably feeling jealous right about now; or maybe you think he is crazy. Is this an innate talent or is it developed? HOLES IN HEAVEN HD - SECRET TESLA TECHNOLOGY HD Movie. The Missing Secrets - Nikola Tesla - Must SEE! What were Nikola Tesla's famous inventions? Who is Nikola Tesla? 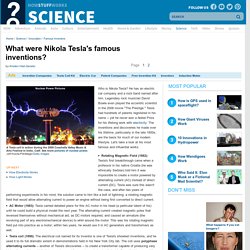 He has an electric car company and a rock band named after him. Legendary rock musician David Bowie even played the eccentric scientist in the 2006 movie "The Prestige. " Tesla had hundreds of patents registered in his name -- yet he never won a Nobel Prize for his lifelong work with electricity. The inventions and discoveries he made over his lifetime, particularly in the late 1800s, are the basis for much of our modern lifestyle.

Let's take a look at his most famous and influential works. Rotating Magnetic Field (1882): Tesla's first breakthrough came when a professor in his native Croatia (he was ethnically Serbian) told him it was impossible to create a motor powered by alternating current (AC) instead of direct current (DC). For more information on scientific discoveries and the people responsible for them, see the links on the next page. List of Nikola Tesla patents. Nikola Tesla was an inventor who obtained around 300 patents[1] worldwide for his inventions. 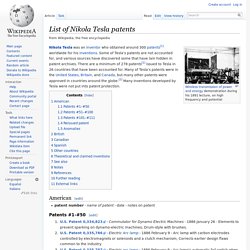 Some of Tesla's patents are not accounted for, and various sources have discovered some that have lain hidden in patent archives. There are a minimum of 278 patents[1] issued to Tesla in 26 countries that have been accounted for. Many of Tesla's patents were in the United States, Britain, and Canada, but many other patents were approved in countries around the globe.[2] Many inventions developed by Tesla were not put into patent protection. American[edit] patent number - name of patent - date - notes on patent Patents #1–#50[edit] U.S. Nikola Tesla holding a gas-filled phosphor-coated light bulb which was illuminated without wires by an electromagnetic field from the "Tesla Coil".U.S. 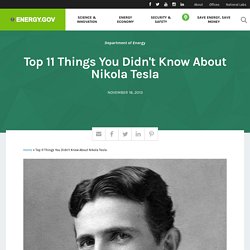 Check back each day to learn more about their lives, their inventions and how their contributions are still impacting the way we use energy today. Support your favorite with the hashtags #teamedison and #teamtesla on social media, or cast your vote on our website. And be sure to submit questions about the inventors for our live Google+ Hangout with Tesla and Edison experts, happening Thursday, Nov. 21, at 12:30 p.m. EST. 11. 10. 9. 8. Nikola Tesla: Biography, Inventions & Quotes. Nikola Tesla is often called one of history’s most important inventors, one whose discoveries in the field of electricity were way ahead of his time and continue to influence technology today. 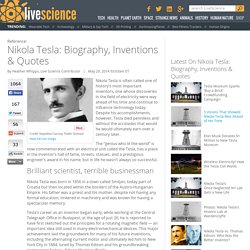 Despite his accomplishments, however, Tesla died penniless and without the accolades that would he would ultimately earn over a century later. The “genius who lit the world” is now commemorated with an electrical unit called the Tesla, has a place in the inventor’s hall of fame, streets, statues, and a prestigious engineer’s award in his name, but in life he wasn’t always so successful.

Brilliant scientist, terrible businessman Nikola Tesla was born in 1856 in a town called Smiljan, today part of Croatia but then located within the borders of the Austro-Hungarian Empire. His father was a priest and his mother, despite not having any formal education, tinkered in machinery and was known for having a spectacular memory.