Why Don't You Try This?: The 10 Inventions of Nikola Tesla That Changed The World 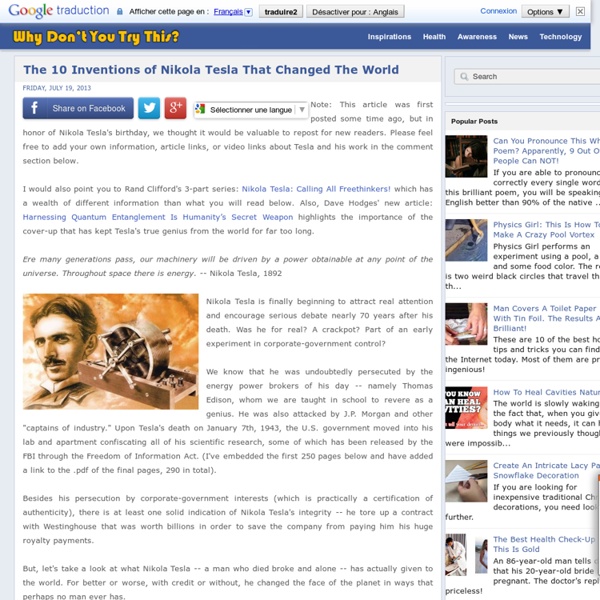 Note: This article was first posted some time ago, but in honor of Nikola Tesla's birthday, we thought it would be valuable to repost for new readers. Please feel free to add your own information, article links, or video links about Tesla and his work in the comment section below. I would also point you to Rand Clifford's 3-part series: Nikola Tesla: Calling All Freethinkers! Ere many generations pass, our machinery will be driven by a power obtainable at any point of the universe. Nikola Tesla is finally beginning to attract real attention and encourage serious debate nearly 70 years after his death. We know that he was undoubtedly persecuted by the energy power brokers of his day -- namely Thomas Edison, whom we are taught in school to revere as a genius. But, let's take a look at what Nikola Tesla -- a man who died broke and alone -- has actually given to the world. 1. 2. 3. 4. 5. 6. 7. 8. 9 and 10. Tesla had perhaps thousands of other ideas and inventions that remain unreleased. Related:  NIKOLA TESLA

Recovered The Ten Inventions of Nikola Tesla Which Changed The W Nikola Tesla-Did You Know? “Tesla was considered an eccentric man who talked of death rays that could destroy 10,000 airplanes at a distance of 250 miles. However, Tesla devised the AC (alternating current) system that we use in our homes today. AC offered great advantages over the rival DC system. By using Tesla’s transformers, AC voltages could be stepped up (or down) and transmitted over long distances through thin wires. DC could not (it required a large power plant every square mile and had to be transmitted through very thick cables). At the 1893 World Exposition in Chicago, Tesla demonstrated the safety AC electricity was by passing high frequency AC power through his body to power light bulbs. By 1898, he was demonstrating to the world the first remote controlled model boat at Madison Square Garden. Nikola Tesla was born at midnight on July 9, 1856 in Smiljan, Lika, Croatia. “…the idea occurred to me like a flash of lightning and in a second the truth revealed itself. 1. 2. 3.

System of Transmission of Electrical Energy SPECIFICATION forming part of Letters Patent No. 645,576, dated March 20, 1900. Application filed September 2, 1897. Serial No. 650,343. (No model.) To all whom it may concern: Be it known that I, NIKOLA TESLA, a citizen of the United States, residing at New York, in the county and State of New York, have invented certain new and useful improvements in Systems of Transmission of Electrical Energy, of which the following is a specification, reference being had to the drawing accompanying and forming a part of the same. It has been well known heretofore that by rarefying the air inclosed in a vessel its insulating properties are impaired to such an extent that it becomes what may be considered as a true conductor, although one of admittedly very high resistance. Referring to the drawing, A is a coil, generally of many turns and of a very large diameter, wound in spiral form either about a magnetic core or not, as may be found necessary.

The Missing Secrets of Nikola Tesla The Secret Life of Nikola Tesla « Revolutionizing Awareness Posted by Admin on June 16, 2010 by Nikola Tesla Suppose some one should discover a new mechanical principle–something as fundamental as James Watt’s discovery of the expansive power of steam—by the use of which it became possible to build a motor that would give ten horse power for every pound of the engine’s weight, a motor so simple that the veriest novice in mechanics could construct it and so elemental that it could not possibly get out of repair. Then suppose that this motor could be run forward or backward at will, that it could be used as either an engine or a pump, that it cost almost nothing to build as compared with any other known form of engine, that it utilized a larger percentage of the available power than any existing machine, and, finally, that it would operate with gas, steam, compressed air or water, any one of them, as its driving power. It does not take a mechanical expert to imagine the limitless possibilities of such an engine. Read the rest of this entry »

Tesla Coils: Unleash the Aether Nikola Tesla's most significant contribution was not AC power, radio, or the induction motor, but what we call the Tesla Coil - a tool which allows for the power of the aether to be unleashed and harnessed. Now being launched through an open source project. by Hank MillsPure Energy Systems News The inventions of Nikola Tesla are numerous. He invented radio, teleautomatics (remote control technology), poly-phase alternating current, the induction motor, and many other innovations that established the foundation for our modern civilization. However, the true significance of his greatest discovery - the "Tesla Coil" - goes mostly unrecognized. There are many misconceptions about Tesla coils and their intended use. Tesla coils have capabilities beyond even the highest voltage transformers of our day, because they are something far different. Radiant Blasts When an electrical switch in an electrical circuit is opened or closed, a spark of high voltage can be created. Safety Enhancements

N. Tesla: The Day Science beginngs to study... Energy By Tesla - Create Your Own Tesla Power System For over 90 years “Big Energy” has successfully convinced the US Government to smother and bury the biggest invention of our time… They tried to keep it hidden from you forever. Why? Because this one, simlpe invention can produce all the natural, clean ELECTRICITY! But now it’s time to expose the truth. It’s time to reveal the only system that can easily produce FREE electricity. And it’s finally time to help you – and millions of other Americans - reduce their utility bills… once and for all. Once you read this eye-opening story, you will completely understand HOW this one, life-changing, money-saving invention could have been kept from you for all these years. The man behind the invention was Nikola Tesla. Over his lifetime Tesla was awarded 11 different patents and worked with technology from electricity to x-rays. How? Well, in 1901 several venture capitalists (including J.P. And these investors were right. But once J.P. Lately we constantly hear about the new, “green” energy. Yes! P.S.